THIS STORY HAS BEEN FORMATTED FOR EASY PRINTING
People

Getting hit in the face for a good cause 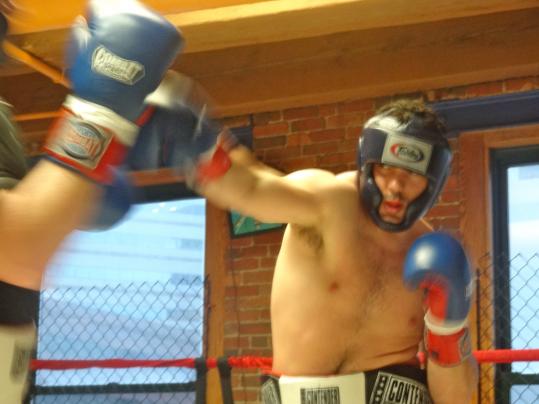 Nick Rossi of Walpole, a novice pugilist in training for the second annual Haymakers for Hope Thursday, calls boxing “definitely the best workout ever.”
By Paul E. Kandarian Globe Correspondent / May 13, 2012
Text size – +

FIGHTING FOR A CAUSE: Nick Rossi of Walpole is a big man who grew up playing hard sports, including hockey in his youth and later, defensive lineman at Boston College.

He just started training in boxing in January, solely to take part in the second annual Haymakers for Hope Thursday at the House of Blues Boston, a fund-raiser for the Dana-Farber Cancer Institute that pits boxers — all with little to no boxing experience, like Rossi — against each other to raise money through ticket sales and sponsorship.

“This is harder than football, harder than hockey or anything else I’ve trained for,” said Rossi, 25, a business development representative. “Definitely the best workout ever.”

And one for a good cause, he said. A friend of his did it last year, and Rossi liked the concept of battling it out in a ring to raise money for cancer research. There are 26 participants in all, with 13 matches on the card.

“I would definitely do this again next year, if I can make the time commitment,” said Rossi, who like others in training, hits the gym four or five times a week.

The boxers train at various sponsoring gyms in the Boston area, including Connors Mixed Martial Arts Academy in Norwood, TNT Boxing in Braintree, and Nexus Martial Arts and Fitness in Wareham.

Rossi is fighting a friend and former BC teammate, Jim Ramellaof Boston’s North End. Friends or not, the competition is stiff, Rossi said.

“Last year, there were some who didn’t take it too seriously, and they got knocked out,” he said. “It’s definitely competitive. No one wants to lose. We have a lot of our friends in this — that’s what made it better, too, all of us raising money.”

Last year, the event took in nearly $190,000, all for pediatric and adult cancer-care and research at Dana-Farber, said Julie Anne Kelly, a Dedham native who along with Andrew Myerson founded the event. She is a cancer survivor, having beaten Hodgkin’s lymphoma 10 years ago when she was 22. Kelly, now a resident of Attleboro, is a Golden Gloves champ, winning in 2009 in New York City, where she met Myerson, a fellow boxer.

“It completely amazes me to see so many fighters with little or no boxing experience doing this, to see their progression from knowing nothing to getting ready for their first fight in four months,” said Kelly, who works for Hearst Television. “They’ve come such a long way; the trainers have done an incredible job.”

Other participants from the area include Brian Higgins of Milton, Chris McGuirk of Norwell, Michael Connolly of Plymouth, Brian Ludwig of Walpole, and Matt Crane of Braintree.

Last year’s goal was $50,000, which was exceeded almost fourfold. This year, organizers hope to hit well over $200,000, Kelly said. Tickets for the event are $75 per person (standing room only). VIP packages go for $150, and box seating and sponsorship packages start at $500. For information and tickets, visit www.haymakersforhope.org.

“That we hit almost $200,000 last year made me realize,” Kelly said with a laugh, “that we grossly underestimated how much people want to see their friends get punched in the face.”

They were part of BC High’s newly formed 15-member robotics team, under the guidance of Mark Pumphrey of Rockland, faculty moderator. The team’s robot was named Rook, called that for its ability to move sideways like the chess piece. The team won the award for highest-seeded rookie team and for creativity for the innovative design of Rook’s drive system.

BUSINESS BRIEFS: Meg Doherty, CEO and executive director of the Norwell Visiting Nurse Association and Hospice, lauded the “tireless and dedicated volunteer efforts by the Friends of the Norwell VNA” for that group’s record-setting gift of $200,000 to the Norwell VNA, the largest single gift in the agency’s 90-year history. The Friends raised the money over decades, Doherty said, through rummage sales, an annual haunted house, tea parties, Santa breakfasts, and other seasonal events. The agency serves more than 25 communities south of Boston, and clinically to include a hospice program, a nonprofit private-services division (NVNA Works), and the Massachusetts office for the Cancer Support Community.

Michael McMahon, CEO of Hill Partners in Weymouth, was named to the South Shore Hospital Presidents’ Circle, which comprises more than 100 businesses whose owners have pledged or donated at least $25,000 to the hospital, typically paid over three to five years. McMahon is co-founder of Hill Partners and in 2008 became full owner of the firm.

Mark R. Whalen of Dedham (inset) was promoted to president and chief operating officer at Needham Bank. Whalen was formerly chief operating officer and is now responsible for the overall implementation and management of the bank’s objectives, policies, and strategic plans in addition to having oversight of all finances. Whalen has more than 30 years in banking, and is the former president and CEO of Dedham Cooperative Bank, joining Needham Bank in 2007 when the two institutions merged.

Paul E. Kandarian can be reached at Kandarian@globe.com.