THIS STORY HAS BEEN FORMATTED FOR EASY PRINTING
Foxborough 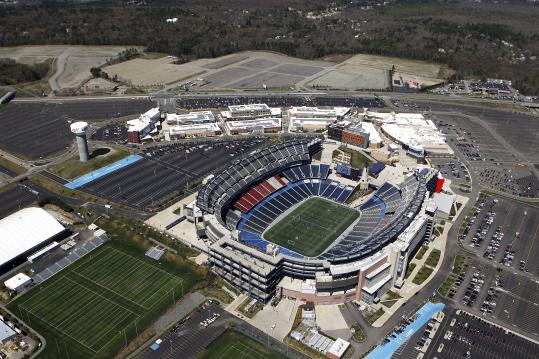 The future of land across Route 1 from Gillette Stadium in Foxborough is unclear now that the Kraft-Wynn casino proposal has been taken off the table. (David L. Ryan/Globe Staff/File)
By Michele Morgan Bolton Globe Correspondent / May 13, 2012
Text size – +

FOXBOROUGH —As the furor of the Foxborough casino battle fades, one question that remains is what will become of the huge piece of land owned by Robert Kraft that would have housed the gaming and resort complex.

Luck has not been kind to the 200-acre parcel located across from Gillette Stadium that is currently an overflow parking lot on game and event days. Before being targeted by Las Vegas casino developer Steve Wynn, the land was slated for a massive biotechnology park that also failed to take shape.

Kraft officials have said the property was marketed for years as a potential corporate headquarters but it generated little interest. There doesn’t appear to be an immediate option for development now, either.

A spokesman for Kraft declined to comment Wednesday on the property’s future or if any new ideas have surfaced following the startling announcement last week that developers had decided to suspend their plans for a gaming hall after Foxborough voters elected two anti-casino selectmen.

Selectman Lynda Walsh, who had backed the casino concept, predicted that Kraft will continue to “think outside the box’’ when it comes to the Route 1 land and will bring the town something that will fit in with neighboring businesses.

“We have asked for the community’s help in devising our five-year master plan, and it was nice to see that residents took the time to fill out the questionnaires,” Walsh said. “But, at the end of the day, as far as that parcel, it’s up to Mr. Kraft and the Kraft organization to search out the entity for a perfect fit.”

Whatever lies ahead for the property, and overall development plans for the town, local residents, developers, and businesspeople will face a reshaped Board of Selectmen as a result of Monday’s election.

Voters selected Ginny Coppola and reelected incumbent Lorraine Brue, both casino opponents. By Tuesday afternoon, Kraft and Wynn had announced they would respect the will of Foxborough voters and suspend their efforts, ending months of controversy that had dominated discussion in the town.

Board members appointed James DeVellis as their new chairman. In his first official remarks, DeVellis thanked the Krafts for keeping their word to back off if it was clear residents opposed it. DeVellis also indicated that the town is still open to collaborative partnerships with the Kraft Group, its largest taxpayer.

“We do want to work with them as much as we can,” DeVellis said. “But it has been a difficult year. And this will bring a quiet and calm back.”

Along with former selectmen chairman Larry Harrington, who was voted out Monday, Walsh favored hearing the casino proposal. But after 58 percent of the town's 10,000-plus registered voters went to the polls to elect anti-casino candidates, it became clear that what they don’t want is gambling.

While the town can’t legislate what Kraft or anyone does with private land, it can decide the future direction of its own economic development efforts, said Planning Board vice chairman William Grieder.

Planners have worked closely with the owners of the New England Patriots for years, he said. But when necessary, the board also stands its ground.

Recently released executive session meeting notes detailing conversations between attorneys for the town and the Krafts, Harrington, and Town Manager Kevin Paicos over a contentious billboard agreement showed that the Krafts wanted concessions including veto power over sewer hookups to potentially competitive businesses and wanted Planning Board support on zoning issues.

That wasn’t going to happen unless warranted, Grieder said.

As for the future of the Route 1 parcel, he said, “We’re not naive to think that they don't have several options they would like to pursue there. Something will go into that property.”

“I have been engineering sites for 25 years and have seen the market switch from retail, to office, to housing and assisted living, to mixed use, to institutional such as colleges and universities and back again to retail,’’ DeVellis said in an e-mail to the Globe. “Any combination of those would seem to complement the area in moderation, but in the end, the land is private and it is up to the owner what they want to pursue.’’

Planners have been collecting public reaction for months to revamp the current town master plan that was developed in 1971. That was the same year that the New England Patriots’ former home, Schaeffer Stadium, opened.

The master plan will reflect what residents want to see in the entire community, officials said, including along Route 1, and will also include a strategy for the downtown.“What we are hearing, and something we already know, is the need to revitalize downtown first, at the expense of other development, so that it doesn’t disappear,” Grieder said.

Foxborough’s center is considered charming, with a central town common and quaint architecture. But a major stumbling block to new development is that the downtown area’s sewer capacity is at maximum.Planners are also trying to balance other demands, including the items people have posted on a “wish list” for new businesses — some of which have already been tried, unsucessfully. Many returned surveys indicate a desire for family restaurants, Grieder said. Currently, Foxborough is rife with doughnut shops, nail salons, pizza shops, and Chinese restaurants.

At a recent two-day open house in March hosted by the Planning Department, the casino, sewer access, and traffic were among top concerns that surfaced from conversations with more than 200 people.

In addition to the economic development aspect of the master plan, the Metropolitan Area Planning Commission is preparing a housing production plan, and the Foxborough Conservation Commission is looking at open space, planners said.

Grieder said he is gratified by the volume of participation in the master plan process, ranging from students who want to be sure there is something to do in town to senior citizens with other unique wants and needs.

A public workshop to explore three alternative economic development scenarios that have been drawn up by planners McCabe Enterprises, and review the benefits and impacts of each, is planned for May 24, in the McGinty Room at the Foxborough Public Safety Building. The meeting begins at 7 p.m.