New England Mafia a shell of former self

Arrests, time have whittled membership down to a handful 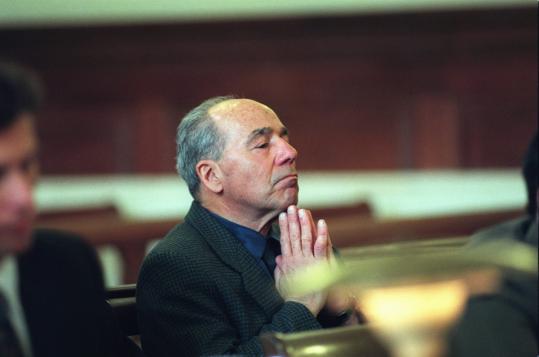 Anthony DiNunzio, the alleged don of the New England Mafia, sat in a federal courthouse in Rhode Island last week, draped in tan prison garb, nodding as a federal judge said he faces a lengthy prison term if convicted of racketeering and extortion.

Luigi Manocchio, DiNunzio’s 84-year-old predecessor, will go before a judge in Rhode Island on Friday to be sentenced for extorting protection payments from strip clubs.

And Mark Rossetti, one of the most feared captains in the New England mob, is being held in Massachusetts on state charges of extortion and bookmaking. He has been cooperating with the FBI as an informant. Meanwhile, Robert DeLuca, a notorious captain from Rhode Island, has disappeared from the area and is widely reported to be cooperating with authorities against his fellow made members.

This is the leadership of the New England Mafia, a skeleton of the organization glorified in novels and in Hollywood. No more than 30 made, or sworn-in, members make up an organization that in its heyday was more than 100 strong, law enforcement officials say.

Investigators, legal observers, and court records describe an organization that continues to erode, as made members and associates abandon the code of silence and cooperate with investigators. The younger crop is addicted to drugs, and the older, wiser members have either died or have gone to jail, officials said.

He said the arrest of the 53-year-old DiNunzio by federal authorities from Rhode Island on April 25, about two years into his reign as boss, also shows that law enforcement has been able to suppress the workings of the Mafia to the point their crimes are minimal.

DiNunzio is the sixth consecutive head of the New England Mafia to be charged: His predecessors have all been convicted, and the area has not seen a don hold as much power as Raymond L.S. Patriarca, the longtime head of the Patriarca crime family, did until his death in 1984.

Patriarca, who died at the age of 76, controlled an empire in the 1960s that stretched from Rhode Island to Maine, specializing in loan sharking, illegal gambling, and profiting on stolen goods, according to FBI documents released after his death.

“In this thing of ours,’’ Patriarca once told an associate while under electronic surveillance, “your love for your mother and father is one thing; your love for The Family is a different kind of love.’’

Johnson and other investigators still expect someone will take DiNunzio’s place, knowing that, for some, the thought of living the “Sopranos’’ lifestyle is too attractive to ignore.

“If it wasn’t for the Sopranos, we’d be able to suppress it even more,’’ Johnson said. “You’ve got to continually prune at the mob, because if you don’t it will grow like a weed.’’

Anthony Cardinale - a Boston lawyer who has represented a Who’s Who of Mafia figures including former bosses Francis “Cadillac Frank’’ Salemme and the late Gennaro Angiulo - said that as long as there are criminals who need protection, there will be organized crime.

“As long as there’s drugs going on, and bookmaking, there will always be a mob,’’ he said. “Even with all the risks involved, there will still be somebody policing the bad guys, and that’s what the mob guys do.’’

He added, however, “as far as I’m concerned, it’s a dying occupation, in a sense that anyone who’s out there should realize that if they look to the left or look to the right, they should realize someone is working with the FBI or wearing a wire . . . which is unheard of.’’

According to prosecutors, at least two Mafia figures have cooperated against DiNunzio: One of them is a senior member of the New York-based Gambino crime family who has reportedly committed suicide, and the other is said to be DeLuca.

DiNunzio can be heard in wire recordings saying, “You get no shot today, no shot at all.’’

DiNunzio is the younger brother of convicted mobster Carmen “The Cheeseman’’ DiNunzio, the former underboss who was jailed for trying to bribe an undercover agent posing as a state highway worker, and separately for extortion and gambling.

Both brothers started their careers in organized crime with the Chicago Mafia, and were convicted in 1993 of extorting gamblers in Las Vegas for a Chicago Mafia crew based in Southern California. They served several years in prison before making their way to Boston.

Anthony DiNunzio became acting boss of the Patriarca family in early 2010, following the arrests of his brother and predecessors Peter Limone, who is in his late 70s, and Manocchio.

Limone is serving probation for bookmaking. Manocchio and several members of his crew have pleaded guilty to extorting strip clubs in Rhode Island.

Soon after becoming boss, Anthony DiNunzio allegedly demanded 50 percent of the strip club payments that were going to Manocchio’s crew, a demand that would prove to be his downfall. He faces up to 20 years on some charges, and a judge has ordered that he be held without bail.

Longtime Mafia observers said the arrest of DiNunzio was disappointing, embarrassing even, given that the once-proud organization has resorted to shaking down strip clubs.

“It’s just not glamorous now,’’ said Arlene Violet, a former Rhode Island attorney general and radio personality who has written a musical about the mob lifestyle. She recalls the days when made members ran businesses and matched wits with Wall Street.

“When your scheme is shaking down strip clubs, oh brother,’’ she said. “It’s so sleazy. Their crimes aren’t as sexy anymore.’’

Even in Boston’s North End, where prosecutors said DiNunzio showed up regularly at the Gemini Club, a small, members-only social club on Endicott Street, locals said the Mafia’s working was virtually non-existent.

“I’ve never heard of anybody being pressured here,’’ said Joanne Prevost Anzalone, former president of the North End Chamber of Commerce. “I think it’s always been a little exaggerated here to begin with. . . . You don’t walk down the street here and see anything you don’t see in any other neighborhood in the city.’’

But according to prosecutors, DiNunzio wanted power, and he sought to define his reign as soon as he took the helm. He explored ways to extort new businesses, and used the threats of violence to keep his underlings in order. He had questioned whether any of his members were cooperating with the FBI, and he suspected Salemme, who is in a witness protection program, was talking. He sent someone to look for the former boss.

DiNunzio had also worked quickly to reestablish a crew in Rhode Island, following the arrest of Manocchio and the arrest of his crew in September 2011.

He named an existing made member captain, so that he could continue the extortion of strip clubs, according to prosecutors. But the new captain, prosecutors said in court last week, wanted to install his own crew, to replace everyone he knew to be under investigation.

“They’re all in trouble up there, they ain’t coming home,’’ the new captain reportedly said.

Globe correspondent Colin A. Young contributed to this report. Milton J. Valencia can be reached at mvalencia@globe.com. Follow him on Twitter @miltonvalencia.