Handling of controversy is roundly criticized 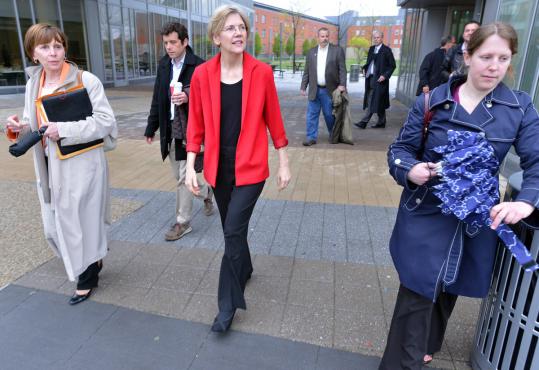 Elizabeth Warren, who visited Salem State University Friday, said that people who hired her have stated “as clearly as humanly possible that I got what I got because of the work I’ve done.’’ (JOSH REYNOLDS FOR THE BOSTON GLOBE)
By Noah Bierman and Frank Phillips Globe Staff / May 5, 2012
Text size – +

Elizabeth Warren fumbled through her worst stretch as a Senate candidate this week, setting off a debate among strategists over whether the controversy over her claims to Native American ancestry would linger when the November election is closer.

The Warren campaign will not say when top advisers learned that she considered herself part-Native American, but it was an element of her biography that seemed to catch them off guard.

When news emerged last Friday that Harvard Law School had publicly touted Warren as a Native American professor in the Harvard Crimson in the 1990s, Warren advisers saw it as a story that would go away quickly.

But the story took added dimension when it was revealed that Warren had listed herself as a minority in a major legal directory.

The fallout and her unsteady response to it subjected the rookie Democratic Senate candidate to tough questions, an unflattering national glare, and a recognition from others that she had hit her first real stumble. The Washington Post’s political blog, The Fix, gave Warren the dubious honor “Worst Week in Washington.’’

“I have yet to run into anyone in politics who believes that this was handled well at all,’’ said Jennifer Duffy, a senior editor at The Cook Political Report who tracks Senate races around the country. “The explanations have left enormous room for doubt and speculation.’’

Democrats and some outside strategists continue to believe the issue, first reported in the Boston Herald, will die down soon, though others caution the controversy could become part of Warren’s identity, damaging her reputation among socially conservative swing voters.

The story also poses potential dangers to Senator Scott Brown, whose questioning of her Harvard qualifications risks undermining his campaign message that he is above personal attacks.

But most of the political critique has been directed at Warren.

Warren has been forced to respond to the story incrementally, as new details have emerged, including a genealogist’s finding that documents suggested she might have been 1/32 Cherokee but would not qualify for tribal membership.

She had her most awkward public response on Wednesday, when she said she had checked a box listing herself as Native American for the legal directory for nearly a decade in hopes that she would “meet others like me,’’ and mentioned that she heard her aunt admiring the “high cheekbones’’ of her grandfather.

“Brown is having a field day, and she is not responding effectively,’’ said Thomas J. Whalen, an associate professor of social science, and a political historian at Boston University. “She is just flailing around.’’

Peter Ubertaccio, a political scientist at Stonehill College, said the story got more traction than warranted because Warren was unable to offer a succinct answer.

The Warren campaign sent out statements Monday from people who had key hiring roles at Harvard and her previous universities attesting that her heritage did not play a role in her hiring.

But Harvard has not explained why the law school chose to hold her up as an example of diversity.

Warren rejected suggestions Friday that she could have handled the issue differently.

“I am who I am,’’ she added. “and that’s all I can do. I think you’ve talked to the people who hired me and I think they have said as clearly as humanly possible that I got what I got because of the work I’ve done.’’

But Brown’s campaign has questioned Warren’s credibility and mailed out updates of each new development to reporters. The senator himself has joined the efforts to keep the issue alive.

“The only thing I’ve said is these are legitimate questions,’’ Brown said Friday. “The question is whether and how she used a minority status to gain or not gain access to employment. And only she and Harvard can answer any of these questions.’’

Warren and the law professor who recruited her to Harvard, Charles Fried, a solicitor general for Ronald Reagan, have said her heritage did not factor into her hiring. She is regarded by attorneys as one of the nation’s leading bankruptcy specialists.

But that has not stopped commentators online and in print from making ethnic jokes, and mocking Warren as a phony affirmative action hire.

“There’s a risk, because it can become and I think it indeed has become, quite ugly,’’ said Ubertaccio.

Democrats have been frustrated that the story has overshadowed news stories that hurt Brown’s image, including the release of tax returns showing he is wealthier than his regular guy image suggests, and the revelation this week that he has taken advantage of a provision of the national health care law he opposes, which allows him to include his grown daughter in his health insurance plan until age 26.

Many Democrats have taken the long view, emphasizing the excitement on the left around her candidacy, her ability to spend $1.6 million on a new ad campaign, and the belief that Brown will take his share of criticism as the campaign wears on.

“She had her bad week and Brown will have his,’’ said Phil Johnston, former chairman of the state Democratic Party and Warren supporter.

But Republican strategist Todd Domke disagreed. He said the gaffes and Warren’s clumsy moves over the past week will be remembered by voters.

“They’ll look for ‘the truth’ about the candidates in news coverage and debates,’’ Domke said. “That’s why gaffes and scandals can be lethal.’’

Staff writer Stephanie Ebbert contributed to this story. Noah Bierman can be reached at nbierman@globe.com. Follow him on Twitter @noahbierman.