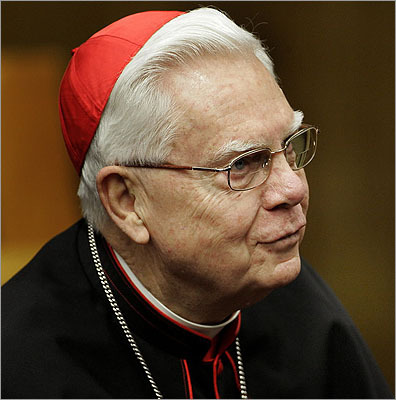 Three respected Catholic publications are reporting that Cardinal Bernard F. Law, the controversial former Boston archbishop, played a key role in the Vatican’s decision to tighten its grip on the largest association of Catholic nuns in the United States.

The Vatican announced its initiative on April 18, naming three American prelates to ensure that US nuns conform to Church doctrine, which has grown more conservative under Pope John Paul II and his successor, Pope Benedict XVI.

Earlier this week, a columnist for The Tablet, a British Catholic weekly, reported that the Vatican’s initiative was sparked by Archbishop William E. Lori, who was recently named to lead the Archdiocese of Baltimore, who “formally petitioned’’ the Congregation for the Doctrine of the Faith to investigate the nuns.

The Tablet also reported that Law was “the person in Rome most forcefully supporting Bishop Lori’s proposal.’’

But Lori denied the first of those assertions in a statement issued to the Globe yesterday through the United States Conference of Catholic Bishops.

“Bishop Lori did not petition the CDF to conduct the current doctrinal assessment of the [Leadership Conference of Women Religious], nor would it have been appropriate for him to do so,’’ the statement said.

The statement did not address any role that Law might have played in the move to rein in the Leadership Conference, which represents 57,000 nuns, or 80 percent of those in the United States.

Sandro Magister, writing in an Italian publication, and John Allen of the National Catholic Reporter also reported that Lori and Law used their influence to help initiate the Vatican’s actions against the nuns, although those reports were less specific about their actions.

And the US Conference of Catholic Bishops appeared to at least partially confirm those reports in a second statement to the Globe.

This statement said that Lori, when he was chairman of the US bishop’s doctrine committee in 2008, fielded complaints about US nuns and provided the Vatican with copies of speeches then on the nuns’ website.

Moreover, both Magister and the columnist for The Tablet, Robert Mickens, traced the Vatican’s effort to exercise greater control over US nuns to 2008, when a Vatican committee on which Law served began a formal visitation, or audit, of Catholic women’s religious orders.

In April, a Vatican agency cited the Leadership Conference of Women Religious for using materials that “do not promote church teaching’’ on family life and sexuality. The Vatican also complained that the nuns sometimes took positions in opposition to the nation’s bishops and were “silent on the right to life from conception to natural death, a question that is part of the lively public debate about abortion and euthanasia in the United States.’’

Sister Annmarie Sanders, spokeswoman for the nuns’ organization, said the nuns know very little about the origins of the Vatican’s action.

But according to Magister, the 2008 visitation was regarded by nuns as a hostile move that eventually grew more conciliatory, especially after the appointment of a new prefect, a Brazilian cardinal, and a new secretary, Archbishop Joseph W. Tobin, an American. Tobin, in particular, seemed to go out of his way to mend fences with the nuns in public statements expressing his admiration for them. The Globe was not able to reach Tobin.

The new appointments, Magister writes, were “not at all to the liking of the cardinals from the United States,’’ including Law, none of whom attended Tobin’s appointment at St. Peter’s Basilica.

Law resigned as Boston’s archbishop in 2002 following articles in the Globe reporting that he had allowed priests accused of sexually molesting minors to continue serving in parish ministries where they persisted in abusing children.

The reports about a possible Law role in the doctrinal crackdown on US nuns come as Vatican watchers in America say that Law’s influence in Rome has been widely underestimated, noting that since arriving in Rome at the end of 2002 he has served on a handful of influential Vatican committees, or Congregations, including one that assists the pope in naming bishops throughout the world.

“Until last year when he turned 80, Cardinal Law was active on a number of the Vatican’s most influential congregations, and that has allowed him to assert his views on a wide range of church issues,’’ said Richard Gaillardetz, a theology professor at Boston College.

The congregations are departments of the Roman Curia, the administrative body of the Vatican.

The Rev. Thomas J. Reese, a Jesuit priest and a senior fellow at the Woodstock Theological Center at Georgetown University, also said that many observers underestimated Law’s influence by focusing on his former role as archpriest at St. Mary Major Basilica while ignoring his posts on important Vatican committees, especially the Congregation for Bishops.

“He clearly was in a position to have influence to the extent that anyone would listen to him,’’ Reese said. “And many people at the Vatican felt he got a bum deal and were sympathetic to him.’’

The esteem in which Law was held was apparently so great that in 2009 he was entrusted with a secret mission to Hanoi, where he arranged the first visit to the Vatican by a president from the communist government of Vietnam.

In a secret Dec. 4, 2009, diplomatic cable posted on the WikiLeaks website last year, the US Embassy to the Holy See told the State Department that “it took a visit to Vietnam last week by American Cardinal Bernard Law to finalize arrangements to allow the visit [to the Vatican] to go forward.’’

Since turning 80 last year, Law has relinquished his seats on all Vatican congregations, as well as his post at St. Mary Major Basilica. But Gaillardetz, said he believes Law will continue to wield influence in Rome.

“The fact that he steps down from those congregations doesn’t mean someone isn’t having a cappuccino with him to talk about the next appointment in the United States,’’ Gaillardetz said. “He can play an enormous role.’’