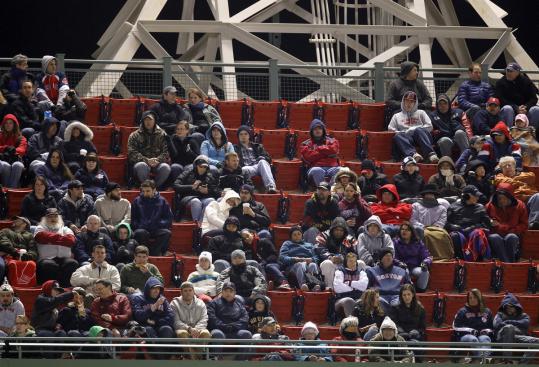 Even though the Red Sox reported it as a sellout, there were plenty of empty seats at Wednesday’s game at Fenway Park. (YOON S. BYUN/Globe Staff)
By Bob Hohler and Seth Lakso Globe Staff | Globe Correspondent / May 4, 2012
Text size – +

At 9:35 p.m. Wednesday, in the seventh inning of a game against the Oakland A’s, the Red Sox cut off ticket sales at Fenway Park with an estimated 300 seats unsold, according to a Globe gate-by-gate review and interviews with team executives.

At 10:19 p.m., the Sox announced the game was sold out. Seconds later, they said they had extended their sellout streak to 723 games, the longest in the history of Major League Baseball.

The answer, it seems, depends on how you define “sellout.’’

In a sequence of events that raised questions about the authenticity of the prized streak, the Sox stopped selling tickets for the game first at the ticket office on Yawkey Way when the game began, then at Gate E an hour later, and finally at Gate A deep into the game, with a sales clerk telling a Globe correspondent at each closing that tickets remained available.

The Merriam-Webster dictionary defines a sellout as “something for which all tickets are sold.’’

The Sox embrace an alternate definition that permits them to declare a game sold out even if hundreds of tickets go unsold but others are distributed for free.

“I can understand the confusion,’’ said Sam Kennedy, the team’s executive vice president. “But we operate by a definition that is commonly practiced throughout Major League Baseball and professional sports.’’

The Sox count the total number of tickets they distribute, including an average of 800 complimentary tickets each game to charities and others, as the basis for a sellout. They also count standing room tickets toward the total.

Skeptics might call it a “distribution streak’’ rather than a sellout streak, given the team’s reliance on complimentary tickets.

By giving away hundreds of tickets to Wednesday’s game and selling hundreds of other standing room tickets, the Sox kept their streak alive despite reporting a paid attendance of 37,434 - 61 seats shy of capacity. They did so by including the tickets distributed, which pushed the total to 37,819, exceeding the seating capacity by 324.

In fact, the paid attendance fell short of Fenway’s seating capacity in all three games this week against the A’s, according to official box scores. Yet thanks to the distribution formula, the streak that began May 15, 2003 endures.

Kennedy said the Sox do not give away tickets to keep the streak alive. He said the team generally gives away far fewer tickets than other major league team because of Fenway’s small size and the high demand for tickets.

He said the average paid attendance last year was 37,714, which exceeds the seating capacity, and includes standing room.

Using their own definition of a sellout, the Sox are closing in on the longest sellout streak in the history of US major league sports - 814 by the NBA’s Portland Trailblazers from 1977 to 1995. The Red Sox are on track to break Portland’s record early next season, despite nights like Wednesday when the temperature was 47 degrees, the climate clammy, and the opposition the weak-hitting A’s.

Ron Bumgarner, senior vice president of ticketing for the Sox, said it is only nights like those in April and May when “my ulcers flare up’’ over the possibility of the streak ending. He defended the team’s definition of a sellout, saying the Sox need to hold back complimentary seats to accommodate families of teams, players, and umpires, among others.

“No team can ever sell every single seat to every game,’’ Bumgarner said.

Demand for tickets to Wednesday’s game was so weak that good seats were easy to purchase on the team’s official online sales site, www.redsox.com. Various blocks of 10 adjoining seats - the most a customer can purchase in a single transaction - were available on the site until the Sox ended online sales 2 1/2 hours before the game.

At Fenway, a Globe correspondent was assigned to buy the last tickets sold for the game and determine whether additional tickets remained available. He began at the general ticket office on Yawkey Way as the game started at 7:10 p.m. There, he was directed to Gate E on Lansdowne Street, where the Sox make several hundred tickets available on the day of each game.

The correspondent said he wanted to buy as many as six tickets but needed to wait until the last minute to see how many of his friends would arrive. He was the last person to consult the clerk at Gate E before it closed and was told there would still be tickets available at Gate A, which would remain open until the seventh or eighth inning.

At Gate A, he was told sales would end at 9 p.m. At that time, he asked for a pair of tickets and was given adjacent seats in the infield grandstand section 15, row 13. He tried repeatedly to pay, but was told to take the tickets for free.

“We try to take care of our loyal customers,’’ Bumgarner said.

The correspondent saw the window clerk give away four more tickets moments after he received his. He then checked with the clerk just before the booth closed at 9:35 p.m. and was told that tickets remained unsold.

Overall, Sox tickets remain among the hottest in baseball. Despite the team’s embarrassing collapse last September, the Sox entered the 2012 season having already sold more than 2.7 million tickets, putting them on track to exceed 3 million for the fifth straight season. They have sold 22,158 season tickets, with a waiting list of 8,500.

Yet interest in single game tickets has lagged, which has been evident in the resale market. Jim Holzman, president of Ace Ticket, said he lost about $10,000 on tickets he had bought and was unable to sell for Wednesday’s game, not including about 100 tickets he gave to charities.

"Right now, I’m losing money’’ on Sox tickets, Holzman said. "That’s the way it goes. It’s just part of the business. It turns out to be a wonderful time for someone to buy Red Sox tickets below face value.’’

“That would be insane,’’ he said. “How long would I be in business if I was losing millions of dollars buying seats I couldn’t sell?’’

Mike Janes, general manager of Fansnap.com, which aggregates online tickets from multiple sources, said the average resale price for a Sox ticket this year is $127, down slightly from the last three years. He said the average price of resale tickets for the A’s series at Fenway dropped to $91, but noted that the most inexpensive seats in the bleachers and outfield grandstands have been selling this season for much less than face value in some cases.

But the Sox sellout streak - or distribution streak - appears safe for now.