Search in Rockport for missing toddler called off 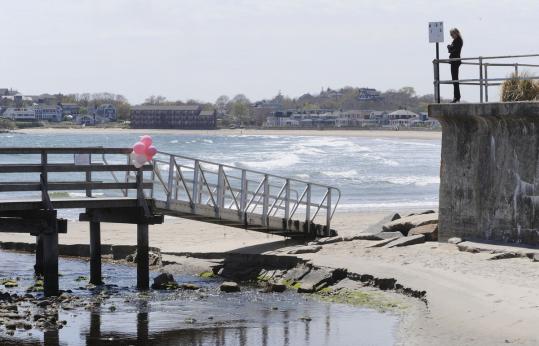 Balloons were left near where Caleigh Anne Harrison was last seen. Currents are unpredictable, making it difficult to predict where a person might end up. (LISA POOL FOR THE BOSTON GLOBE)
By Martine Powers Globe Staff / April 27, 2012
Text size – +

After a week of searches using helicopters, boats, divers, canine units, side-scan sonar, and all-terrain vehicles, police have ended their search in Rockport for missing 2-year-old Caleigh Anne Harrison, a toddler from Gloucester who went missing while visiting Long Beach with her mother and 4-year-old sister.

Clear skies and calm waters made for excellent visibility in the water Thursday, but two final dive searches yielded no clues, said State Police spokesman David Procopio. Speaking on behalf of the Massachusetts State Police, the Rockport police and fire departments, the Coast Guard, and the Environmental Police, he said the results of the searches have been heartbreaking.

“Even as the days passed and the good outcomes looked less and less likely, all anyone on the team wanted still was to be able to bring her home, whatever that meant, to her family,’’ Procopio said. “We terminate the search with sadness that we were not able to do that.’’

Caleigh went missing from the beach in the area of Saratoga Creek around noon last Thursday. When a ball flew over a wall, her mother turned her back to the toddler to retrieve it. When she turned back two minutes later, the girl was gone.

Procopio estimated that search crews had covered 5 square miles of ocean over the last week.

“During the search, divers free-dove around rocky peninsulas and outcroppings, submerged rocks, and Milk Island, located about a mile offshore. We placed weighted buoys into the current and followed the paths they have taken, and searched those areas,’’ Procopio said in a statement.

Continuing to enumerate the lengths to which searchers had gone, Procopio said that dogs searched Milk Island, which is uninhabited, and that police consulted with commercial fishermen and the harbormaster in an effort to understand the currents and prevailing tides.

Many factors could have made it difficult for dive teams to find a person or evidence in the water: Tidal and offshore currents can often go in different directions, making it difficult to predict where a person or object would be carried.

“The study of the currents is not an exact science,’’ Procopio said. “We make best guesses and best estimates based on knowledge that we have.’’

Rough seas kick up silt and sand, reducing visibility for divers. And because Rockport juts out into the Atlantic Ocean, it is less likely that a person or evidence in the water would stay in one area.

“You’re dealing with the ocean, a wide-open ocean, not a protected inlet or bay,’’ Procopio said. “It’s not a sheltered body of water, and that makes it difficult.’’

Harrison’s grieving family held out hope Wednesday that she is still alive. They speculated that she had been abducted, rather than swept into the sea.

“We think we would have found something by now,’’ said the girl’s uncle, David Harrison Jr., speaking at a press conference at his Gloucester home Wednesday afternoon. “And that gives us a little bit of hope, because if she is somewhere else, we have a chance of finding her.’’

Procopio said there is no evidence that an abduction or criminal action took place.

“We have assured the family that if even a shred of information arises to suggest otherwise, we would follow it up thoroughly,’’ Procopio said.

Officials discussed last Thursday afternoon whether they could send out an Amber alert but realized Caleigh’s case did not fit the criteria because there was no description of a suspect or a vehicle, Procopio said.

Still, he urged anyone with potential information in the case to contact Rockport police.

“We hope [Caleigh’s family’s] reunion with their little girl that they love will still happen,’’ he said. “Caleigh will always be in the thoughts of those of us who tried very hard to find her.’’