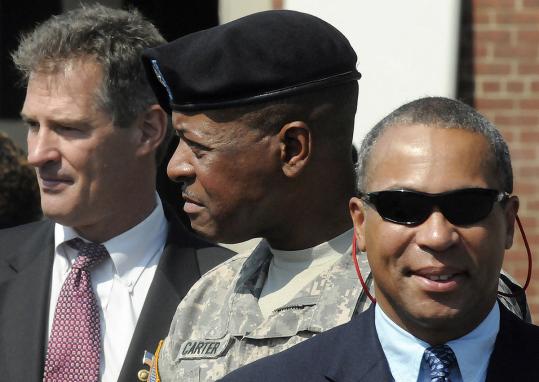 The commander of the Massachusetts National Guard says that rape allegations against him are part of a years-long “smear campaign’’ by a powerful group of senior officers at the Guard’s Milford headquarters who opposed his efforts to make them work a five-day week and to change a state law so they could be fired without a court-martial.

“I didn’t commit any rape,’’ Adjutant General Joseph C. Carter said this week in his first extensive comments since he was placed on administrative leave while investigators look into charges that he raped a subordinate in 1984. Until now, he has only issued a brief statement denying the charge.

Carter said his internal opponents have repeatedly made anonymous charges against him to the Army’s inspector general, and have tried to derail his pending promotion to two-star general.

Carter said the rape charge has been propagated by the Guard’s quartermaster, an officer who clashed with Carter over alleged mishandling of federal funds that led the Army to demand $1.6 million in repayment from the Guard. Carter ordered Quartermaster Mark P. Murray court-martialed after he refused Governor Deval Patrick’s order to resign, and Murray aired the 27-year-old rape charge against Carter as part of his defense.

“Everything in my career has been about respecting people and equal opportunity,’’ Carter said. “It’s what I’ve championed. This is against everything I’ve stood for my entire life. It’s an outrageous smear.’’

But Susan Pelletier, who says Carter raped her on a Florida beach when she was a 23-year-old Guardswoman in his military police unit, said her charges have nothing to do with National Guard infighting. Pelletier, who agreed to have her name published, says she does not believe that Carter does not remember the night of the alleged attack while the unit was on a training exercise.

“What am I supposed to say?’’ said Pelletier, who admits she was surprised when Army investigators contacted her in November about the allegations. “He’s lying. He’s lying about the whole damn thing.’’

Carter’s response to the rape allegations exposes bitter internal feuding at an agency that has sent 12,000 Massachusetts soldiers and airmen to active duty in Iraq, Afghanistan, and other countries since Sept. 11, 2001. During a period that 17 members of the Guard died in action, another 130 suffered injuries, and thousands more reported psychological symptoms from serving in a war zone, a fierce internal battle has raged on the home front as Guard leaders fought for control.

Carter, the first African-American commander in the Massachusetts National Guard’s 375-year history, knew he was walking into controversy from the day Patrick named him to the job in December 2007.

His predecessor, who had been appointed by Governor Mitt Romney, campaigned to keep the job under Patrick and made no secret of his disappointment at being pushed aside.

“I wasn’t happy with [Carter’s] appointment,’’ retired Brigadier General Oliver J. Mason said in an interview. “I wanted to stay as the adjutant general. I felt there was an obvious bias of some sort involved in Carter’s selection because I didn’t feel any change was needed and I was well regarded, I believe, and the Massachusetts Guard was well regarded nationally.’’

But Carter saw a need for change. To start with, full-timers were working officially sanctioned four-day weeks, which he felt sent the wrong message.

“We were a branch of the military engaged in a war, and critical to our responsibility was to provide well trained troops and equipment to support the state,’’ said Carter. “I couldn’t see us doing that for just four days a week.’’

Carter was also concerned about the 50-year-old state law that made it impossible to remove his four top assistants from their jobs without going through a costly and time-consuming courts-martial. He called for changes in the law to give him more discretion in the removal of the “state staff.’’

Carter said that some of the assistants saw him as a threat to their lucrative Guard positions. Three out of four of them have a particularly generous deal under which they retired from federal military service, allowing them to collect a large pension, while making a six-figure income from the Massachusetts Guard.

“From the get-go, I was told that the state staff guys would do all they could to stop my nomination,’’ Carter said.

Carter said the animosity has for several years prevented him from being promoted from one-star to two-star general, something that requires approval of the US Senate. The inspector general of the Army is required to investigate all allegations, Carter said, and anonymous enemies have provided a steady supply.

“All it takes is the mere lodging of a complaint; that is enough for you to be flagged and have your nomination package pulled by the Army,’’ said Carter, whose promotion is on hold now because of the rape investigation.

Carter said he had particular problems with Murray, who oversees armories and other state property, and one of the assistants that could be removed only by court-martial. In Carter’s view, Murray wielded too much control over the Guard’s money and other resources, operating almost completely outside state financial controls and keeping most of the Guard’s resources in two bank accounts that his office alone controlled.

After Murray refused to resign, Carter launched the first court-martial proceedings at the Massachusetts Guard in decades.

Murray was charged with violating state and federal laws by failing to deposit the more than $30 million in federal money with the state treasury or use the state’s accounting system, as required. He also failed to return interest paid on federal funds to the federal government, leading to a federal demand for $1.6 million in repayment.

But Carter’s move to court-martial Murray backfired. The five-member jury agreed in October 2010 that Murray had “failed to comply with federal law’’ in managing Guard funds, but they voted 3 to 2 in favor of keeping him in his job. Murray remains the quartermaster, though he admits that Carter stripped him of most responsibilities and exiled him to an office in Reading.

During the court-martial, Murray suggested he was being persecuted for investigating the rape charge decades before. Murray said that as a National Guard lawyer, he had interviewed the victim and suggested she contact the police if she wanted to press charges, something Pelletier said she never did because she was afraid.

Today, Murray says he believed Pelletier’s story that after an evening of socializing in Florida with other Guardsmen, Carter had sexually assaulted her after the car they were riding in pulled off the road near a beach.

“My position is everything [Carter] has done has been retaliation because I investigated the [alleged] rape,’’ Murray said in an interview.

But Carter said he had no reason to hold a grudge against Murray because he did not know there was an alleged rape or that Murray had investigated it until more than 25 years later. If he had been worried about the existence of old charges, he would have steered clear of Murray, not seek to remove him from the Guard, he said.

Murray denies he had anything to do with the current Army investigation of Carter, though he said that Pelletier has contacted him several times in recent months.

Someone sent an anonymous letter to the National Guard Bureau in Virginia last October accusing Carter of conducting a “bogus’’ court-martial of Murray to punish him for his role in the rape investigation. The letter also suggests that Carter tried to force out two judges on the court-martial panel who voted to keep Murray in the Guard.

“General Carter should be the Army Times’ poster boy for toxic leadership,’’ the letter concludes.

Now, Carter knows he is in danger of losing his job as adjutant general permanently, bringing a humiliating end to a career that has included time as MBTA police chief and as the youngest superintendent in Boston Police Department history. That is why, Carter said, he decided to speak out after maintaining silence for weeks.

“The only thing that is of importance to me right now is to restore my reputation, to restore my integrity as Joseph Carter,’’ said Carter. “To me, everything else is secondary.’’