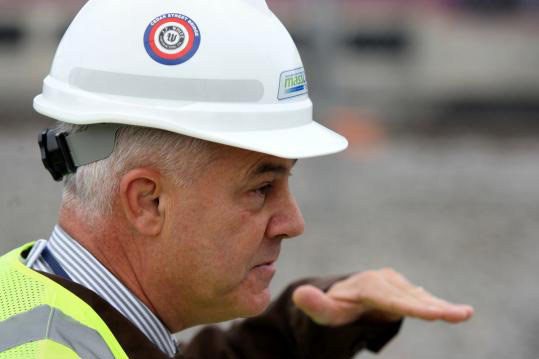 The state’s top highway official says all the light fixtures in the Big Dig tunnels must be replaced, a $54 million effort made necessary by design or manufacturing defects that have led to dangerous corrosion.

The project, expected to begin next year, will cause frequent lane closings in the tunnels for up to two years, a headache for motorists. The work will be done largely at night, with traffic diverted to surface roads.

Since a light fixture fell onto the northbound lane of the Thomas P. O’Neill Jr. Tunnel in February 2011, engineers have temporarily shored up the 8-foot light fixtures in the 7.5 mile tunnel system with plastic ties. Now, after a year of study, the state’s highway administrator, Frank DePaola, is recommending a complete overhaul, the most expensive of several alternatives.

“The preferred alternative is a complete replacement,’’ DePaola told the Massachusetts Department of Transportation board of directors Wednesday.

“The existing fixtures continue to corrode,’’ he said. “We could have more incidents. For that reason, I think it is best for all of us that we remove the fixtures.’’

“We just have to do it,’’ added Richard A. Davey, the state transportation secretary and DePaola’s boss, agreeing it is a safety issue.

Though the replacement project will be expensive, DePaola said the new fixtures offer opportunities for savings over the long term from energy efficiency. He said the more energy-efficient LED lights are expected to cost $2.5 million a year less in electric bills than the current fluorescent lights.

He also said the new fixtures will not be susceptible to the moisture that apparently caused the corrosion in the existing fixtures. The new light casings will be sealed plastic fixtures, rather than an assembly of removable component parts that require maintenance. When the new lights burn out, the entire fixture will be replaced, he said.

Money for the overhaul is expected to be drawn from a maintenance fund set up in 2008 with the proceeds from a nearly $500 million settlement with Big Dig contractors Bechtel/Parsons Brinckerhoff and others for shoddy work on the $15 billion project, which has been plagued by problems ranging from water leaks to a fatal ceiling collapse in 2006.

Before the state can begin the project, however, the transportation board must approve the plan. In addition, the federal government must approve use of the Big Dig settlement fund for the light replacement project.

Transportation officials still have not determined who is to blame for the corrosion that so weakened one fixture that it fell and left dozens of others badly compromised, DePaola said. They initially focused on the company that manufactured the lights, NuArt of California, but the company was bought out by another firm and discontinued years ago.

“We are working with our attorneys and engineering consultants to determine responsibility,’’ DePaola said, adding, “You can’t get damages from a company out of business.’’

If the state is able to recover damages, that money will be used to replenish the maintenance fund, which now has a balance of about $393 million, he said.

If the lighting plan is approved, as expected, tunnel closings related to the overhaul could begin in about a year, transportation officials said. Crews will close either the northbound or southbound side of the O’Neill Tunnel at 11 p.m. and reopen it at 6 a.m.

Closings will also be necessary at the Ted Williams and Interstate 90 Connector tunnels.

Such closings, however, have already begun in the O’Neill Tunnel for washing and other maintenance and will continue for about a year, transportation officials said.

The Globe reported last year that the Big Dig’s chief engineer, Helmut Ernst, wrote in a memo to his bosses that constant water leaks in the tunnels were causing safety problems and at least $150 million in damage, including corroded electrical systems and flooded air vents, and even damage to the enormous steel girders that support the O’Neill Tunnel.

In his memo, Ernst wrote that “leaks greatly contribute to the moist corrosive tunnel environment,’’ especially when combined with road salt.

But Ernst attributed the fallen light to a much larger problem: the salty ground water that seeps in through cracks and other openings in the tunnels.

However, Ernst was fired in August after saying publicly that Big Dig engineers tried to avoid putting into writing discussions of problems in the tunnels. In fact, Ernst’s team of engineers filed no reports on the light fixture collapse after it happened.

On Wednesday, DePaola acknowledged leaks as an ongoing and permanent issue.

“We continue to work on the leaks,’’ DePaola said. “I think we are slowly reducing the amount of leaks in the tunnel, but there will always be some infiltration. And we will always be dealing with sealing off leaks.’’

Eric Moskowitz of the Globe staff contributed to this report. Sean P. Murphy can be reached at smurphy@globe.com.