Rise in kindergarten demand leaves many in city scrambling 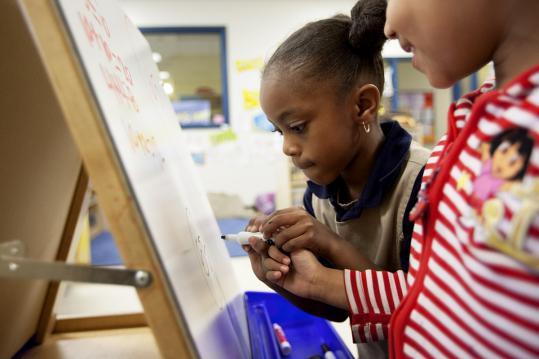 Demand for kindergarten seats in the Boston Public Schools for this fall has risen by more than 25 percent, an unanticipated increase that has left hundreds of students without an assigned school and has prompted officials to add more classrooms.

The enrollment boom surfaced in the past few months during the first round of registration for kindergarten classrooms that will serve students who will be 5 by Sept. 1. The School Department received 2,306 such applications, up from 1,823 during that same period last year.

School and city officials had several possible reasons for the increase. Among the theories: An overhaul of the city’s school system is giving parents greater confidence that their children can receive a top-quality education in Boston public schools.

“Parents appreciate what they have seen,’’ said Superintendent Carol R. Johnson. “They have confidence in the changes we are making to improve academic opportunities. Even schools that have been underchosen are increasingly more chosen.’’

Other possible explanations: that cash-strapped families are increasingly unable to afford private school tuition and that school officials have been more proactive in letting parents know when to apply for kindergarten.

Some 344 would-be kindergartners have been left without an assigned school for the fall, 128 more than last year. Although they have been placed on waiting lists for up to three schools they applied to, they may never get in.

That scenario is compelling parents to consider other schools - often the less desirable ones that have not filled up yet - or private school options or a move to the suburbs. Many parents are stunned by their predicament.

“We didn’t think it was going to be like rolling the dice,’’ said Whitney Hayden, whose daughter is at the bottom of the waiting list for Warren-Prescott K-8 School, just two blocks away from their Charlestown home. “We feel like the situation is out of our control, which is an unsettling feeling. . . . And we feel like it’s pressuring us to make a decision that we don’t want to make, which is to leave the city.’’

Hayden said they are trying to explore every option, including private school, so they can stay in the neighborhood they’ve grown to adore, and recently brought the issue before the School Committee.

Predicting kindergarten enrollment in a city as large as Boston can be a tricky endeavor, school officials say. The transient nature of the city - with many young, middle-class families moving out and a number of immigrant families moving in - creates volatility in relying on birth rates.

Another complicating factor: The city, which does not operate traditional neighborhood schools, divides its approximately 80 early childhood centers, elementary schools, and K-8 schools into three geographic regions, and enrollment fluctuates from one region to the other. This year, for instance, kindergarten demand has been the highest in the north and west assignment zones.

“Things can change quickly,’’ said Jerry Burrell, the School Department’s director of enrollment, planning, and support. “I tend to rely on trend data, the history we have, and subtleties in the differences in the data.’’

The School Department is trying to respond to the rising demand by adding a kindergarten classroom at five schools: Umana Academy in East Boston, Harvard-Kent in Charlestown, Mission Hill in Jamaica Plain, and Haley Elementary and Sumner Elementary, both in Roslindale.

The city is not obligated under state law to make a seat available for all preschool students who apply, as it is with kindergarten.

The School Department, at the urging of Mayor Thomas M. Menino, is in the midst of exploring a complete redesign of the city’s more-than-two-decade-old system of assigning students. The mayor wants students to attend schools closer to home to save millions on busing, and the School Department has been holding community meetings to gather their ideas.

The goal is for the School Committee to vote on adopting a new system by the end of this year. But attempts to change the school lottery system for more than a decade have failed because of concern that too many of the lowest-performing schools are in the poorest and most racially diverse neighborhoods.

Menino and Johnson are hoping this time will be different because they launched a concerted effort to turn around many of the schools in those neighborhoods and some are showing increases in test scores and student attendance. But the possible changes are doing little to ease the anxiety of those parents who did not prevail in this year’s lottery.

Margaret Day’s 4-year-old son is near the bottom of waiting lists at three schools for preschool, leaving little chance of admittance. Now, the Jamaica Plain mother is resigned to going through the lottery again next year for kindergarten, even though many seats will be snatched up as preschoolers move up. She said she does not understand how the School Department was “blindsided’’ about the enrollment increase, and is pushing for changes.

“We are going to be picking through the bones to get a good seat next year,’’ Day said. “The reason we went through the [preschool] lottery is because of the difficulty of getting into kindergarten.’’