Both finding support as negative labels fail to stick 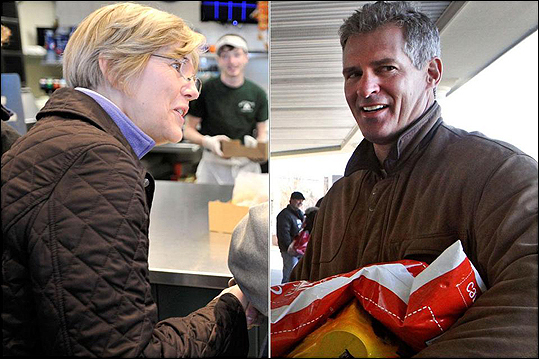 Republican Senator Scott Brown and Elizabeth Warren, his likely Democratic opponent, are locked in a dead heat, with a large bloc of voters still undecided about which candidate to back in this marquee matchup, a Boston Globe poll has found.

The survey found that both candidates remain popular and are successfully managing their core political message and fending off attacks on their public image at this early stage of the campaign, which has become a focal point for the national parties as they vie for control of the Senate.

Voters seem to have responded to Brown’s message that he is a moderate, independent, and likable political figure, looking out for the state’s interest regardless of party. And Warren, though less known, is seen by many as a consumer advocate, who would champion working people, tax the rich, and battle corporations.

Few poll respondents associated her with the “Harvard elitist’’ label that Brown has tried to tag her with. Likewise, only one in five of those surveyed agree with Warren’s argument that Brown is marching in lockstep with the Republicans.

With a long seven months to go before Election Day, the survey shows Brown with 37 percent of the vote and Warren with35 percent, while 26 percent said they are undecided. That amounts to a statistical tie, as the telephone poll of 544 randomly selected likely voters, taken March 21-27, has a margin of error of plus or minus 4.2 percentage points.

Both candidates appear to be faring well among the voting blocs each needs most: Brown outpaces Warren by three to one among self-described independents, voters Republicans depend upon in this heavily Democratic state. Warren holds a better than three-to-one lead among those who identify themselves as conservative and moderate Democrats, a group of voters who helped form Brown’s coalition two years ago, when he first won office.

Still, roughly a third of voters in those two groups remain undecided, according to the poll, and whichever candidate wins them over will be in a strong position come November.

“This is a wide open race,’’ said Andrew E. Smith, the director of the University of New Hampshire’s Survey Center, which conducted the poll. “Both candidates are generally well liked. Unless something dramatic happens, this will go down to the wire.’’

After he emerged as a political sensation following his victory in the 2010 special election, Brown repeatedly registered in polls as the most popular political figure in the state. And while he remains well liked, with 54 percent of respondents viewing him favorably and 29 percent unfavorably, he now passes the mantle of most-popular to an unexpected successor: Attorney General Martha Coakley, the Democrat who was ridiculed nationally after her defeat to Brown in that special election.

Coakley, who easily won reelection and has quietly rebuilt her reputation through her work as attorney general, is now viewed favorably by 62 percent of voters, and unfavorably by 23 percent, according to the poll.

Governor Deval Patrick, who just over two years ago was being consigned by Democratic supporters to the political graveyard, has continued to see his popularity rise. He now is slightly more popular than Brown, with 57 percent viewing him favorably and 27 percent unfavorably.

His deputy has not fared nearly as well. Lieutenant Governor Timothy P. Murray, who has been dogged by questions about an early-morning car crash that totaled a state car and also about his associations with a former Chelsea housing official under investigation for corruption, has seen his favorability drop to 29 percent, while 30 percent view him unfavorably.

President Obama remains popular in Massachusetts, a state he carried easily in 2008 and one that has long been considered safe ground for Democrats in presidential elections, the poll found. Nearly three in five people view him favorably, his highest mark in the state since at least 2010.

That’s a contrast to former Governor Mitt Romney, the front-runner in the Republican primary, who is viewed unfavorably by more respondents - 47 percent - than favorably - 42 percent.

In a head-to-head matchup, Obama holds a 49 percent to 33 percent edge over Romney, with 16 percent of respondents saying they have yet to decide.

Those figures reinforce the prevailing wisdom that Massachusetts will not be a battleground state in the presidential contest, despite Romney’s ties here.

But both parties see the US Senate race as one of a handful in the country that will determine who will control the sharply divided chamber. Warren’s entrance into the race last fall kicked up huge excitement among Democrats, both in Massachusetts and across the country, giving them hope that the seat that was held by the late Edward M. Kennedy could be recaptured.

Most Democrats in the race soon dropped out. Warren’s lone remaining competitor in the Democratic primary, Marisa DeFranco, a North Shore immigration lawyer, is not known by 82 percent of those surveyed.

Warren is setting her sights directly on Brown, who is showing that he is anything but an easy target.

In one area that could prove significant as the race moves forward, Brown has a clear lead. Brown was viewed as more likable than Warren by 57 percent of voters, compared with 23 percent who said she was the more likable candidate. Even a plurality of Democrats said Brown was more likable.

So far, the campaign has been relatively low-key. The candidates have yet to mount full-on advertising assaults, and neither has absorbed significant attacks. Brown has effectively used his office in recent months to craft a more moderate image than the one that emerged from the special election, when conservatives and Tea Party members from around the country rallied around his pledge to vote against Obama’s health care bill.

Brown is seen as more bipartisan than Warren, with 49 percent of those surveyed saying he would be better able to work with members of the opposite party, compared with 27 percent who said that about Warren. Brown’s attempts to distance himself from the national GOP may be also working. He is seen by 44 percent as sometimes influenced by the Republican Party, while 27 percent says he votes independently of his party.

That appealed to one respondent in the poll. “He’s not part of a big political machine - yet,’’ said Mark Landry, 54, a retired correctional officer from Springfield, who says Brown will get his vote again.

Since she kicked off her campaign, Warren too has been able to consolidate her public profile. So far, she has been able to fend off Brown’s efforts to paint her as elitist. Only 2 percent of respondents used that word to describe her, with another 2 percent using Harvard, the university where she teaches law.

A plurality, 44 to 35 percent, said that Warren would do more to help working people than Brown would. Respondents were split evenly about which candidate best understands people like themselves.

Warren’s identification as consumer advocate - one that has propelled her to national prominence - is a strong association, even to independents who voted for Brown.

Another person surveyed, Richard Pearlstein, a retired product manager from Newton and self-described independent voter, said he voted for Brown in 2010 because Coakley seemed like a typical machine politician. This time, he’s voting for Warren, citing her background on consumer issues.

“She’s more consumer-driven,’’ the 65-year-old Pearlstein said. “There have been several instances where I don’t think he’s voted in the best interest of the general public.’’

In addition to describing Warren as “consumer advocate,’’ a smaller number of those polled used the word intelligent. Her biggest downside is her perceived political leanings. Six percent said she is too liberal.

When asked to describe Brown in a word, the vast majority of those polled used positive descriptions that mostly matched his campaign’s imagery: honest, moderate, independent, pickup truck, and relates to regular people were all offered by at least 6 percent of those surveyed. Negative responses included impressions that he is fake and votes with Republicans too often, both which drew just 3 percent of the respondents’ comments.

Still, Brown will need to close the deal with voters like John Healy, another respondent. He is a 48-year-old heavy-equipment contractor from Dudley who says he is an unenrolled independent.

Healy, an Obama supporter, voted for Brown against Coakley in 2010 because Brown “seemed like an average Joe’’ who put the interests of others ahead of personal gain. But Healy has not made up his mind this year because, like many voters, he is not yet paying close attention to the race and has yet to size up Warren.

“People change, you know,’’ Healy said. “I hope he’s the same guy. If I like his attitude, the way I did the last time, he’ll get my vote again.’’