Red Line has taken travelers across town for a century 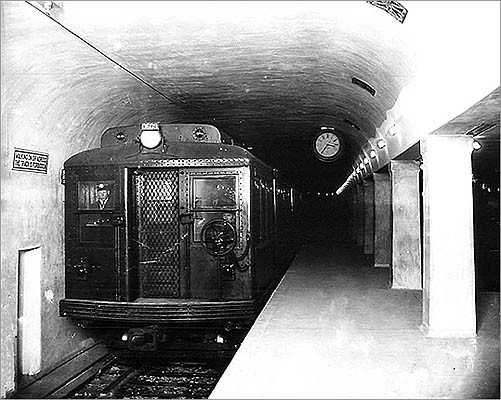 In 1912, the subway line’s original moniker did not pack much punch.

It was not until 1965, that the Cambridge-Main Street Subway and the Cambridge Connection, which stretched from Park Street to Harvard Square, was assigned a color and a punchier name: the Red Line, in a nod to Harvard’s crimson.

But soon after the launch of that line, which celebrates its 100th anniversary Friday, it was considered a central spine of Boston that brought the city’s insular neighborhoods together with unparalleled ease and speed.

‘‘The Red Line tied two heavy ends together, providing a means for people from very different and disparate parts of the city to get into the city center,’’ said Bradley H. Clarke, president of the Boston Street Railway Association.

The Red Line, he said, has had fewer accidents and derailments than any other line on the MBTA, he said. When it comes to rapid transit, he said, the Red Line is a workhorse, not a show horse.

‘‘It’s not the flashiest line in the country, and it’s certainly not the newest,’’ said Mortimer L. Downey III, former deputy secretary of the federal Department of Transportation. But, he said, ‘‘it’s a model for long-term impact.’’

At its start, the Red Line also featured the longest and widest cars in the world. Long, straight tracks, rather than winding routes mimicking the labyrinthine streets above, provided unprecendented comfort for passengers.

At its opening on March 23, 1912, Bostonians marveled at the trip, which once took 25 minutes in a trolley through Boston’s clogged x streets, could now be done in eight.

The first train was greeted with cheers from revelers, many of whom waited in line all night to be among the first to purchase tickets for the train. By the end of the day, an estimated 204,000 people had ridden the line.

Journalists took note of Park Street station, which allowed riders to exit on both sides of the train, as well as Harvard Square, where the split-level platforms distinguished between incoming and outgoing trains:

‘‘Here a new wrinkle in transportation is given a most complete tryout,’’ the Globe wrote.

And then there was that view.

‘‘When it came out into the open at the bridge over the Charles River, there was more cheering,’’ the Globe reported, ‘‘and everybody on board seemed to appreciate more than ever the beautiful picture presented by the river scene and the Boston shore away to the southward.’’

Adel Daghmouri, 40, a thoroughly present-day commuter from Cambridge, said Thursday that this stretch from Kendall/MIT to Charles/MGH is a treat during his daily commute.

‘‘It’s calm,’’ he said. ‘‘It changes everyday. It changes with the seasons. I wish the whole line was elevated so I could see that.’’

Of course, the Red Line had its challenges.

In August 1975, three Red Line trains carrying 1,200 people crashed into each other between Park Street and Charles/MGH, injuring 132 passengers.

The epic snowstorm of February 1978 halted service on the above-ground sectors of the Red Line. A couple of days after the storm, Clarke was riding a southbound train from Cambridge to downtown when the iced-over tracks caused the train to slip as it tried to chug over Longfellow Bridge. The driver, undeterred, backed up the train past Kendall/MIT and halfway to Central Station, where he hit the gas and ‘‘took off like a bat out of hell,’’ skating clean over Longfellow Bridge, Clarke recalled.

‘‘Sparks were flying,’’ Clarke recalled. ‘‘It reminded me of a July Fourth firework celebration.’’

There were also triumphs.

In 1948, the Red Line was the first line on Boston’s subway system to be outfitted with upholstered seats, polka dot curtains, fluorescent lighting and fans for ventilation.

The Red Line has always been the most ahead-of-the-curve line on the MBTA, Clarke said, and that will probably continue.

Of all the MBTA’s tunnels, he said, the Red Line has the most buffer space surrounding trains, giving it the most room for potential experiments with new trains or types of locomotion.

‘‘The Red Line has enough room to do these kinds of experiments,’’ Clarke said. ‘‘If they’re going to innovate, the Red Line would be the best candidate.’’

Daniel Lampariello, 20, is a cofounder of @Boston_to_a_T, a Twitter account known for re-tweeting passengers’ rush hour gripes and snarky comments about service.

Still, Lampariello said, he has got a soft spot for the Red Line in his heart. ‘‘It definitely has its ups and down,’’ said Lampariello. ‘‘But it’s definitely a cool line.’’

Another Red Line enthusiast, Stuart Stina, 21, plans to celebrate the centennial in style, hosting a party Friday night at Central Square, with a Red Line cake and subway-shaped candies. ‘‘We’re totally going to transit-geek it out,’’ Stina said.

But as much as he holds the Red Line dear, his loyalties are fickle: He is already making plans for a summer cookout in Jamaica Plain to celebrate the 111-year anniversary of the Orange Line.

Globe correspondent Zachary T. Sampson contributed to this report. Martine Powers can be reached at mpowers@globe.com. Follow her on Twitter @martinepowers.