In fury, families of the victims cry ‘No justice’ 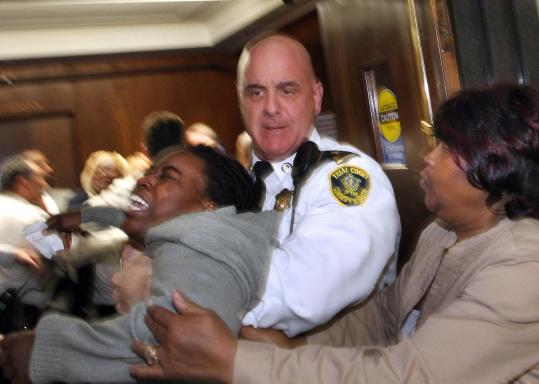 A court officer restrained a member of a victim’s family as the verdicts were read. Delorise Flonory (right), grandmother of victim Eyanna Flonory, walked out with her. (John Tlumacki/Globe Staff)
By Brian R. Ballou Globe Staff / March 23, 2012
Text size – +

Amid the sudden wailing, she simply stood and walked out.

In the hallway, with not-guilty verdicts still being read in the courtroom, she heard sobs and angry cries of the other victims’ families streaming out. “They’ll get theirs!’’ someone shouted.

But it wasn’t until Inez Smith was outside the courthouse in the hard-lit day that she let out her own rage-stricken shriek.

“I did not get justice!’’ she screamed.

And then Smith - grandmother of the 2-year-old boy shot to death in the quadruple slaying that has become known as the Mattapan Massacre - began to chant. She thrust her forefinger at the air, as though at someone she could blame, at someone who would take responsibility for her grandson’s death, and for letting the only suspects in the case go.

The trial that ended Thursday with an acquittal for Edward Washington and a mistrial for Dwayne Moore ignited fury among the family members of the four victims. Many of them believed the accused to be guilty and had looked to a verdict for closure.

Most had come to the courthouse every day of the five-week trial, witnessing the brutality of the crime through sometimes grisly testimony that included photographs of bloodied victims laying naked in the street. As the jury deliberated for seven days, some had stayed close by, fearing they would miss the verdict if they left.

But as the verdicts were being read Thursday, Ebony Flonory, the sister of the slain Eyanna Flonory, began screaming, cursing at the outcome. She lunged at the defendants’ table and had to be restrained by court officers who dragged her out.

Several minutes later, a stream of family members came out of the courthouse. Filled with shock and unresolved grief, some marched to the State House and demanded to see the governor.

Outside the courthouse, relatives huddled on the steps, some sobbing and consoling one another.

“You put a murderer back on the streets, other people can be become murderers, you understand what I’m saying?’’ Smith said. “What are we going to do? We are going to pray, we’re going to church.’’

Avis Springette, the 2-year-old victim’s aunt, said “We have to swallow this pill. It doesn’t matter how much water we drink, we can never swallow that pill.’’

Springette said she lost faith Thursday in the judicial system.

“They have made a big mistake, because these two guys that are walking, they are going to do it again to somebody else’s family in a matter of time,’’ she said.

Ebony was walking with her mother and said there was “no justice.’’

“My sister and nephew did not get justice,’’ she said.

Brian Ballou can be reached at bballou@globe.com.