NStar says it won’t pay for lost business or wages 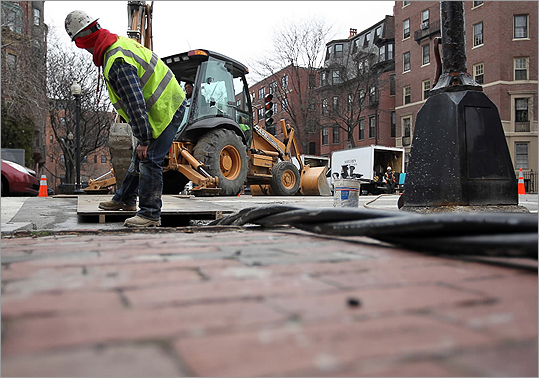 (Jonathan Wiggs/Globe Staff) NStar crews and others worked on on Marlborough and Dartmouth Streets to restore power to Boston's Back Bay after Tuesday nights transformer fire knocked out power to area businesses and residents, whom NStar has said they will not reimburse for any losses.
By Brian MacQuarrie and Brian R. Ballou Globe Staff / March 17, 2012
Text size – +

Despite a two-day blackout in the Back Bay that shuttered businesses and cost some wage-earners their pay, NStar officials said Friday the utility will not pay damages for lost business, income, or food.

“If it’s a normal situation, we do not typically, when there is an outage, provide for losses,’’ Thomas May, top official of the utility, said in an interview. “We do not typically do it for an event that lasts for a day, a day and a half. . . . People normally have their own insurance.’’

A normal outage, according to NStar spokeswoman Caroline Pretyman, includes those caused by mechanical failure, such as this week’s disruption, and even severe weather such as snowstorms and hurricanes.

The absence of human error or negligence in a transformer fire that cut power to 21,000 residential and business customers on Tuesday night means that the utility is not liable for business or income losses, Pretyman said.

Meanwhile, NStar said it planned to temporarily cut power to 8,000 customers beginning at 3 a.m. Saturday for further repair work. The utility said the outage, expected to last up to three hours, was needed so workers could change customers “from a temporary connection to the company’s permanent underground network.’’

NStar’s stance on damages is likely to cause friction with Mayor Thomas M. Menino, who has demanded that the utility reimburse restaurants for spoiled food, pay restaurant workers for lost wages, and cover more than $85,000 in overtime costs for police and other city employees.

The effect of the outage was felt far beyond the 21,000 customers who lost power. The sprawling Prudential Center, for example, counts 8,000 workers in its hundreds of offices and stores. Power at the Pru was not fully restored until 11 p.m. Thursday.

The mayor met for 30 minutes Friday morning in his City Hall office with May, whom he urged to open an NStar office in the Back Bay by Monday so that residents, workers, and employees who work in the area will have a place to seek information.

May said in an interview with the Globe that he is likely to comply with that request.

In a letter dated Wednesday, Menino wrote to May: “I urge you in the days ahead to go beyond your mere regulatory responsibilities and to meet your full obligation as a corporate citizen in Boston.’’

NStar officials said that some losses can be reimbursed, such as the cost of having a car towed from a street where repair work was needed. They directed residents to the utility’s website for a claim form.

Another trigger for damages, May said, would be “if there had been a lingering and persistent issue where a neighborhood or residence had very, very poor reliability over a period of time until we were able to repair or replace the system.’’

The Back Bay blackout did not meet that standard, May said.

By Friday, power had been restored to all remaining areas of the Back Bay that lost electricity after a billowing fire Tuesday night damaged a transformer near the Prudential Center. NStar officials warned that scattered outages might remain and that affected customers should notify the utility.

“Everybody’s pretty much up and on right now,’’ May said at midday Friday.

NStar cautioned that residents might believe they do not have power because they have not reset their circuit-breakers. And new outages could be a product of a temporary power system that has jury-rigged generators, temporary “jumper cables,’’ and the normal electrical system.

“This is a long road,’’ said Pretyman.

NStar utility crews ripped up pavement and sidewalks to conduct repair work. A company official said NStar is legally obligated to pay for street restoration, but not for losses suffered by businesses.

Citing the difficulty NStar had in predicting the return of full power, May did not estimate when the repair work would be finished or how much it would cost.

“We are not giving any firm dates,’’ said May, who attributed the utility’s repeated miscalculations for when power would return to the rarity of the accident.

“When a car hits a pole and knocks it down and hits a transformer, we’ve done that 1,000 times,’’ May said. “But we had never . . . jump-started a grid off of another grid. We were learning, to some degrees, as we went along.’’

Around the Back Bay, the costs of the outage are being calculated.

At Abe & Louie’s restaurant on Boylston Street, general manager Gerry Lynch said he is counting his losses, which will be forwarded to the corporate offices. “Obviously, this is a huge impact to the area,’’ Lynch said.

At Bottega Fiorentina on Newbury Street, a 10-table pizza and specialty sandwich shop, many perishable items had to be discarded while the restaurant was closed for a day and a half.

“I strongly feel that NStar should make some compensation,’’ said manager Irakli Gogitidze, who on Wednesday had estimated losses between $5,000 and $10,000. “For us, that’s huge, because we’re small, and that money could take care of rent.’’

“It was so frustrating because they kept giving us deadlines and telling us when the power would likely be on, but every time we checked, we had no power,’’ he said.

The scene this week jolted visitors such as Patrick Moynihan, who runs a school in Haiti and traveled to Boston to speak Thursday about investing in the development of that country. His speech, sponsored by the Brown Alumni Club of Boston, was moved because of the blackout.

“I was a bit shocked to arrive from Haiti to find part of Boston relying on generators,’’ Moynihan said lightheartedly. “That’s the wrong direction.’’

NStar provided further information Friday about the cause of the outage. A break occurred in the connection between a 115-kilovolt power line and a transformer at the Scotia Street substation, near the Prudential Center, May said.

That failure caused mineral oil, which acts as a cooling agent inside the line, to “spew onto an electrified area,’’ which ignited and then damaged the transformer, May said.

“We’ll probably never know why this happened,’’ May said. “We have never lost a station and never had a station connector fail like this.’’

May said no additional checks of transformer connectors are needed beyond the utility’s regular inspections at the substations that serve downtown Boston.

“We have nothing we could do that we could think of that is going to tell us why this happened,’’ May said. “It is not an indication this puts us at risk’’ of similar failures.

Although May insisted the failure was rare and could not be foreseen, other specialists in the utility industry said such breakdowns are not unusual.

“It may not happen in Boston every year, but it happens all over the country; I’m not surprised,’’ said William H. Bartley, a principal engineer at the Hartford Steam Boiler Inspection and Insurance Co., a leading equipment insurer.

He said the failure could be attributed to a wide range of reasons, from vermin chewing on the seals to weakening insulation.

Earl Owen - senior vice president for Willis Group Holdings, another major insurer of electric utilities - said it would be extremely disruptive for NStar to run additional tests of other transformer connectors, because that would involve cutting power to large swaths of customers.

Andrew Ryan, Andrew Caffrey, and Martin Finucane of the Globe staff and Globe correspondent Colin A. Young contributed to this report. Brian R. Ballou can be reached at bballou@globe.com; Brian MacQuarrie at macquarrie@globe.com.