A fortune made by design 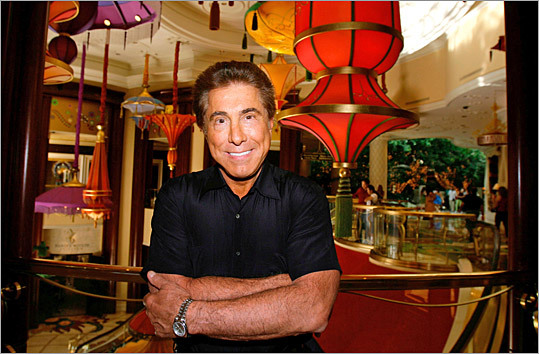 LAS VEGAS - Steve Wynn is adamant: It is not the money that attracts him to Foxborough, where the casino magnate wants to build a gambling resort. At 70, the restless billionaire could hardly spend what he already has.

“I can’t explain it,’’ said Wynn, an obsessive designer of elaborate buildings and landscapes, ranked by Forbes as the world’s 491st richest person. “I never thought of it in terms of the money. It’s something I can do and when I’m doing it, I’m in love with it.’’

In addition to design, Wynn loves to compete - and he’s used to winning. In a video message to Foxborough voters this month, Wynn presented himself as a soft-spoken Mr. Rogers character in a knit sweater, but he’s also a swaggering, brass-knuckled businessman who doesn’t shy from controversy or confrontation.

He’s made headlines recently for an epic legal battle with a former partner, Kazuo Okada, whom Wynn is purging from his company in a forced buyout after hiring a former FBI director to investigate him.

If his plans are approved by Foxborough, Wynn would go head-to-head against a competitor from the Las Vegas strip. Suffolk Downs in East Boston is proposing a casino in partnership with Caesars Entertainment, which runs Caesars Palace. Caesars CEO Gary Loveman is “a friend,’’ said Wynn, as is Suffolk Downs investor Joseph O’Donnell.

But Wynn boasts that the Suffolk Downs crew, despite their pledge to invest at least $1 billion in East Boston, cannot compete with his designs.

“If we get by the voters in Foxborough, if they like the idea, then we’ll be the most popular gambling place in New England, sure as hell,’’ Wynn guaranteed. “Because I know what they’ll do at Suffolk Downs. They’ll build for speed, not for comfort. Just like all the rest of these guys do.

“I think people know the difference between pretty and ugly.’’

Pretty buildings, by Vegas standards, are Wynn’s specialty. The son of a compulsive gambler who ran a bingo hall, Wynn is one of the most influential developers in Las Vegas history.

The Mirage, which opened in 1989, inspired a building spree of over-the-top themed resorts, he said. “Literally, the transformation from the old Vegas to the new Vegas began with The Mirage.

Wynn’s Las Vegas résumé also includes Treasure Island and Bellagio, sold with Mirage to MGM in 2000, and his roughly $5 billion Wynn and Encore, a pair of gleaming coppertone hotels with casinos.

In recent interviews at his office and his home - a two-story villa adorned with artistic masterpieces like a room in the Louvre or the lair of a James Bond villain - Wynn was the picture of a Vegas high-roller on vacation: tanned and relaxed with a brilliant smile, dressed in jeans and a sports coat. His two German shepherds drowsed on the floor next to his secretary’s desk.

Wynn personally approved nearly every detail of the Wynn and Encore hotels. When the Wynn opened in 2005, its creator boasted that he had spent more time on the five-year project than Michelangelo had on the Sistine Chapel. Encore opened next-door to the Wynn in 2008.

The resort’s centerpiece is a 140-foot manmade mountain topped with 1,500 mature evergreens, and a four-story waterfall that gushes into a “Lake of Dreams.’’ The water features are used nightly for elaborate film and light shows.

“But when you see it at night, that is a moment that cannot be duplicated,’’ said Wynn. “Thank God for the slot machines and the blackjack tables. Casinos make it possible to build noncasino stuff that otherwise would be uneconomic. And to me, that’s the only reason I’m in the gambling business.’’

He seems proud of the enormous cost of the resort’s amenities, as if the price tag proves he cut no corners in design. Nothing is more personal to Wynn than his designs.

“I have the ability to visualize space,’’ he said. “My mom was an interior decorator. Maybe it’s a gene, like the ability to sing? I can look out the window with my mouth half open and staring ahead and I can imagine approaching a facility that is, say, white limestone with a three-story atrium.’’ He spread his hands and closed his eyes. “Maybe it’s practice for 40 years but I can see space.’’

How much longer he can see it, no one can say. In a painful irony, the designer so deeply moved by art and architecture, particularly his own, has a genetic eye disease, retinitis pigmentosa, which causes tunnel vision, as if looking through a tube. Strolling the marble halls of his resort, Wynn keeps a hand on the elbow of a visitor walking with him.

In his villa, overlooking the golf course on the Wynn and Encore property, Wynn and his wife, Andrea, live surprisingly simply, other than the decorations. A handful of famous Picassos and a painting by modern art master Fernand Léger hang in their living room. Wynn acquired his latest Picasso about five months ago. He would not say on the record how much he paid, but it was roughly the cost of a fighter jet.

“Look at that picture!’’ he said, beaming at the bright red portrait of Picasso’s mistress, Dora Maar. “Is that fun? Is that Picasso? That picture dances!’’

“And like shrink wrap it goes ‘pop,’ ’’ Wynn recalled. He had ripped a hole in the painting. His guests were shocked. Wynn felt sick. “I turned around and I go, ‘Oh my God. I can’t believe I did that. At least it was me and not someone else.’ ’’

The sale was canceled, and the painting restored by an expert who reattached the broken fibers individually under magnification. It looks perfect. Wynn decided to keep it.

Of course, much of the money for Wynn’s collection came from gamblers who lost their cash in his casinos.

Most people lose, he said. They expect to. “The house has the edge, which is why they scream when they win - ‘Ah! We beat ’em. In spite of everything!’

“We have absolutely no interest in the outcome of the gaming, because we know what it will be at the end of the year,’’ said Wynn. “How many coins go in the damn slot machines determines how many we keep.’’

Like Wynn’s father, “2 to 3 percent of the population has a propensity toward compulsive behavior,’’ including gambling, he said. “For the rest of the people, they understand what a casino is. It’s a place to whoop it up.’’

Many observers think Wynn is wasting his time in Foxborough because the town is unlikely to approve a casino. But Wynn has beaten the odds in the past. In 2000, for example, after his Vegas properties were sold to MGM, “People thought [Wynn] had a good run but that it was pretty much over,’’ said Roger Gros, publisher of Global Gaming Business magazine, which covers the industry.

In the dozen years since, Wynn rebuilt his preeminence on the Strip, and developed two lucrative casinos in Macau.

He is still obsessing about his next design.