THIS STORY HAS BEEN FORMATTED FOR EASY PRINTING
MIDDLEBOROUGH 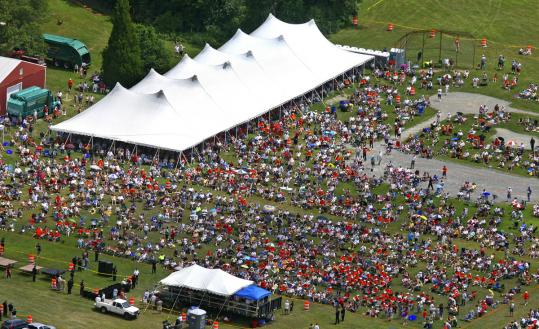 Thousands of people gathered at the high school to vote on a casino proposal in 2007. (Wendy Maeda/Globe Staff/File 2007)
By Christine Legere Globe Correspondent / March 8, 2012
Text size – +

In the five years since the Mashpee Wampanoag inked an agreement with Middleborough for a $1 billion dollar casino, that historic pact has gone from a daily headline to, at most, a footnote in the state’s casino discussion.

To Middleborough leaders, however, the agreement between the town and the tribe still holds, even though the Wampanoag have long since shifted their interest, first to Fall River and finally to a recently announced site in Taunton.

Town officials are now seeking compensation for the effort they put into planning and for the support the town gave the project, and they claim the Wampanoag can’t cut any new deals until they have settled past debts. The town has sent letters demanding payment over the last two years, but the Wampanoag council chairman has responded that the tribe “has no further obligations’’ under the 2007 casino agreement.

“I hope the City of Taunton and the State of Massachusetts, before they sign any contract with the tribe, will make it contingent on their settling their dealings with Middleborough,’’ said Board of Selectmen chairman Alfred Rullo.

But Taunton’s mayor, Thomas Hoye, doesn’t believe his city should become embroiled in the dispute. “That agreement is between Middleborough and the tribe and has nothing to do with us at this point,’’ Hoye said. “We’re under very tight time constraints because of the casino laws. We have to continue down our own path.’’

Middleborough’s long-standing demands are now cast in a new light because Taunton officials and the chairman of the Mashpee Wampanoag have announced a casino plan that they say would bring “thousands of jobs’’ and an economic rebirth of Taunton. The site chosen for the casino is at the intersections of Routes 24 and 140, and the tribe has obtained an option to purchase a parcel of land.

Five years ago, the emerging deal with Middleborough called for a sprawling casino resort with 4,000 slots and 125 gaming tables. Amenities included a five-star hotel, a living museum rivaling Plimoth Plantation, a golf course, restaurants and shops, and recreational facilities such as water parks. In return, the tribe promised $250 million in upgrades to local roads and water-sewer networks, as well as a $10 million annual payment that would rise with inflation.

The July 2007 Middleborough Town Meeting to ratify the casino pact was the largest ever held in the state. Nearly 4,000 Middleborough voters gathered for the outdoor session, arriving with lawn chairs and beach umbrellas to stake out spots as much as four hours before the meeting was to begin. With rock music blaring from the speakers, the atmosphere felt more like a tailgate party than the prelude to an official town vote.

The contract was passed by the Town Meeting, but a month later, Wampanoag Tribal Council chairman Glenn Marshall, who had become the face of the casino project, resigned in disgrace amid reports of a past rape conviction and misstatements about his military record. A year later, Marshall pleaded guilty to embezzlement and fraud charges connected to casino investment money, and he was sentenced to 3 1/2 years in a federal prison.

Cedric Cromwell, a Tribal Council member during the Middleborough casino discussions, took over the chairmanship in 2009. During his tenure, the tribe significantly downsized the Middleborough proposal and changed investors to the Genting Group, which has bankrolled a number of successful resorts worldwide.

The tribe initially honored the terms of its pact with Middleborough, providing over $1 million for planning before annual payments stopped in 2010, shortly after Cromwell announced the tribe’s intention to open a casino in Fall River. That plan later fell through due to state restrictions on the target site.

Former selectman Adam Bond, who played a key role in the 2007 casino negotiations, argues the town is owed some compensation for its role in creating momentum for legalized gambling.

Selectman Allin Frawley said the town is looking for ownership of the 500-acre casino site and is demanding the tract be removed from the tribe’s application to place land into federal trust. Frawley said the Wampanoag also owe Middleborough some cash for time spent on casino planning. “The tribe has to clean up the mess they made in Middleborough before they move on,’’ he said.

Middleborough lost out on a massive overhaul of the rotary and improvements to nearby sections of Route 44 because of the casino deal, according to Stephen Smith, executive director of the Southeastern Regional Planning and Economic Development District. “The state and everyone else said, ‘We can take those projects out of our funding cycle because the tribe will take care of it.’ ’’ Smith said. “The solutions the state is now talking about for that area are much more modest than what it had originally planned.’’

Bond said the town should make big demands. “I think the town’s greatest expectation when the agreement was negotiated was to get a perpetual stream of revenue,’’ he said. “The starting point of these talks should be an income stream along with guarantees so payments will continue no matter who is in charge, and I’d start at $7 million plus the consumer price index.’’

Clyde Barrow, director of UMass Dartmouth’s Center for Policy Analysis, believes the tribe must put the Middleborough debacle to rest, whether the town is right or wrong in its reasoning. “The reality is, they can tie the tribe up on it for a while, so it’s best for the tribe to deal with it,’’ Barrow said. “It’s kind of like paying Middleborough to go away.’’