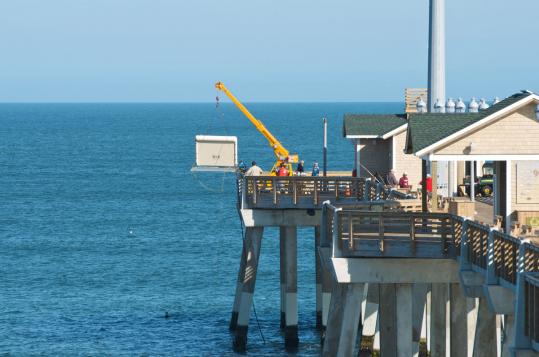 That’s the idea powering Resolute Marine Energy Inc., a start-up company that has its wave-energy research and development lab in the Newburyport CleanTech Center on Mulliken Way.

The ocean isn’t the only sustainable power source around, but solar panels face cloudy days, and wind turbines fall still when the air is calm. While the ocean does have calm days, they’re far more predictable than a passing cloud, and waves are also “much more powerful’’ than wind, according to Resolute’s chief executive, Bill Staby.

“There is much more energy packed into that space with moving water than the same volume of moving air. That’s why turbine blades are so large’’ on wind-powered generators, Staby said recently.

A modest prototype of Resolute’s SurgeWEC wave-energy converter sits in the middle of the lab. The key component is a fiberglass “paddle’’ shaped not unlike a sailboat’s centerboard, nearly 8 feet wide and 6 feet high. It is hinged at the bottom, where it is attached to electricity-generating equipment and a heavy metal frame that can be anchored to the seabed.

Pushed by each passing wave, the paddle swings toward the shore, then back again, returning to an upright position like a swinging door turned on its side. The mechanical energy of the paddle’s movements drives a pump, which transmits hydraulic power to a generator, which in turn converts it to electricity to be delivered to shore.

“Water is about 800 times more dense than air, so you have a lot more energy in water,’’ notes John Miller, executive director of the New England Marine Renewable Energy Center, a collaboration affiliated with University of Massachusetts Dartmouth that supports the development of sustainable sources of power from the sea. “That’s very good for power, but also makes it challenging for things to survive. If you’ve ever stood in the surf, you know what that’s about.’’

A number of companies around the world are developing large-scale projects using wave power to generate electricity for sale to the power grid, which is also the goal for the major wind-farm projects under discussion off the southeast coast of Massachusetts. But Resolute has a different model.

“Our approach is to go with smaller devices that can be deployed, at least initially, with remote communities or island communities that aren’t connected to a grid necessarily,’’ said Staby. “Therefore considerations for ease of deployment, ease of maintenance, and so forth are very important.’’

“Even if a location wanted larger amounts of power, we would achieve that by having multiple units of smaller ones rather than having a big one,’’ said Resolute’s senior engineer, Cliff Goudey.

The company’s SurgeWEC arrays could serve anywhere from isolated coastal villages in Africa and Asia to island communities to remote military or scientific bases, officials say.

A few days after showing a visitor around their lab in Newburyport, Staby and Goudey answered follow-up questions by e-mail from Alaska, where they were discussing the possibility of replacing a village’s diesel-powered electric generator with their wave-powered technology.

Resolute’s prototype weighs 4,200 pounds, and among the features still being tested are the best ways to anchor it in different types of sea-bottom conditions. Despite its weight, the SurgeWEC can be built at the company’s factory and transported to a location for installation, rather than requiring complex and expensive on-site construction, as with larger power-generating systems, Staby said.

The SurgeWEC, since it uses hydraulic force as part of its process, should be of particular interest to places where seawater is pumped ashore for desalinization, Staby said. “The power source and the raw material are already co-located,’’ he said.

Resolute is working toward a pilot desalinization project in South Africa in the second quarter of next year, with a $150,000 US Interior Department grant to move its design along.

Resolute conducted an initial test of the SurgeWEC last year on the coast of North Carolina, near where the Wright brothers made their first flights, Staby noted. Another test is planned this summer on the south coast of Nantucket, in cooperation with the New England Marine Renewable Energy Center.

Miller, at the New Bedford-based center, points out that Resolute’s ocean-power device has one other potential benefit for coastal dwellers.

“It’s of great interest to people in Nantucket, because most devices go in deep water, and theirs goes in the surf,’’ Miller said. “In the process, they’re going to take energy out of the waves, so this could have a positive impact on erosion, if you had a line of these offshore.’’

The SurgeWEC is designed to be durable, but Resolute officials are not looking to locate it in the biggest waves around. A tsunami doesn’t really help with power generation; neither does a light chop. What’s best are medium-size, consistent waves with an interval of 6 to 12 seconds, said Goudey.

The best location? A gradually sloped tropical beach, with an array of devices placed parallel to the coastline and 100 to 200 yards offshore, “outside where people will be surfing, and inside where there would be fishing’’ by commercial boats, said Staby.

Resolute’s administrative office is in Post Office Square in Boston. Funding has been a combination of angel investors and grants, including $1 million from the US Department of Energy in 2010. Staby said he hopes to close a $5 million round of institutional investment over the next six months. The company has two other full-time employees in addition to Staby, and several part-timers, including Goudey.

Noting that the federal grant was part of the economic stimulus package, Staby pointed with pride to a wall map identifying nearly two dozen Massachusetts companies that Resolute uses as suppliers. He says Newburyport’s MacDiarmid Machine Corp. and Salisbury’s Wilson Welding have been especially important, although the paddle itself was built by Wilbur Yachts in Southwest Harbor, Maine.

Staby said one key selling point is that their device wouldn’t disrupt life along the coastlines where it is installed. Sitting perhaps 10 feet under the surface even at low tide, with “guard buoys’’ marking its location, the SurgeWEC can capture a significant amount of wave energy without conflicting with recreational boating and fishing, they said.

And unlike those controversial offshore wind farms, “it won’t spoil your view,’’ said Staby.

“If people don’t see it, they won’t worry about it,’’ he said. “It’s hugely benign in its impact, with wildlife or any other thing.’’