Debate at BU extends to safety 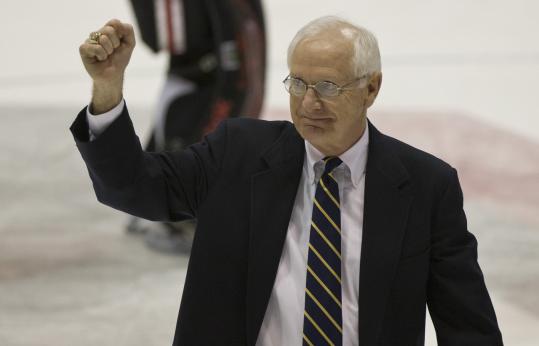 A controversy that began with the arrests of two Boston University ice hockey players on sexual assault charges has mushroomed into a broader debate about women’s safety after a recent graduate called the school’s behavioral health hot line late at night and found only what she called “a useless loop of automated menus.’’

The school, roiled by the assault charges, is forming a task force to investigate its hockey culture. Administrators said the hot line issue stemmed from a misunderstanding and they immediately took steps to remedy it.

“We don’t take a passive or laissez-faire approach,’’ said Margaret Ross, BU’s head of behavioral medicine, noting that the school offers a wide variety of resources, including two highly trained on-call crisis counselors, one of whom counseled the woman who accused a hockey player of rape this week.

But women’s advocates at BU said bigger changes would be needed to address a pervasive “rape culture’’ at the school, one they said was exemplified by recent comments by longtime hockey coach Jack Parker.

In an interview with the Globe Thursday, Parker said he would cooperate with the task force but he doubted campus culture could be changed dramatically.

“It’s certainly different than it was in the ’70s. Sexual mores have changed,’’ he said. “There’s girls on every floor; there’s no men’s and women’s dorms. The idea that hooking up is OK - I don’t think that term was even used in the 1970s. . . . Ninety-nine percent of these problems start with alcohol and sex. That’s a bad combination.’’

Ross said she disagreed that the culture could not be changed.

“The most important concern is that every student should feel safe and cared for. Anything that interferes with that is something BU needs to address actively,’’ she said. “It’s not just ‘boys will be boys.’ That’s not OK at this university. It should never be OK.’’

“Let me try not to use expletives,’’ said Ariana Katz, a senior who co-directs the center. “He’s saying that boys will be boys, and it’s alcohol’s fault, and rape is happening because there are women everywhere? No. These assaults and his response tarnish every single hockey trophy BU has ever won.’’

Katz said she welcomed the school’s new hockey task force but she said the problem extends beyond athletics. For instance, since Jan. 22, three female students have reported that someone tried to film them with a cellphone while they were in dormitory showers.

The BU women’s center, in a statement Thursday night, called on BU to hire a new staff member focused on helping sexual assault survivors, to provide educational sessions for “all coaches, student athletes, faculty, and student leaders,’’ and to immediately expel students convicted of rape and sexual assault.

The statement coincided with a storm on Facebook after a note written by Allison Francis, who graduated last year, went viral.

Francis said she was unsatisfied with the announcement of the hockey task force and wanted to broaden the debate. Late Wednesday night, she called a behavioral medicine hot line listed on BU’s website and asked “what resources are available in terms of rape and sexual assault?’’

The emergency operator, she said, failed to inquire about her well-being, told her “we don’t have anything like that here,’’ and advised her to call a different medical hot line, which referred her back to the first number.

Francis described the call in a note on Facebook.

Ross said the confusion arose from the operator’s belief that “the caller was asking for immediate medical help, like a rape kit. So the operator gave her the medical emergency number. Had she called back and said, ‘What I need is help for a sexual assault and I need to speak to someone,’ she would have been put through to a counselor right away.’’

From now on, Ross said, operators have been instructed to first ask callers if they are in danger, then connect them directly to counselors at any mention of sexual assault.

At other schools where sexual misconduct has been in the headlines lately, such as Colby College in Maine, students have used such case as jumping-off points for campuswide debates about sex, safety, policy, and personal responsibility.

There was evidence that the same process was beginning at BU. The Center for Gender, Sexuality, and Activism scheduled several public forums on sexual assault for next week, and students were discussing the issues in a meeting with a dean, as well as on Twitter with the hashtags #BUconvo and #proudtoBU.

Francis said she was glad to see a discussion beginning.

“In order to actually be proud to be BU students, we have to work on the issues,’’ she said. “I think it’s really important to keep pressure on the administration. The conversation can’t end here.’’