Football and soccer players from 26 area high schools suffered more than 300 head injuries last fall, the first time athletic departments were required to collect data under the state’s new concussion law, according to a Globe survey.

Football players accounted for 207 of the injuries found in the survey, exceeding the totals on soccer teams at most schools. Girls’ soccer programs reported nearly twice as many head injuries as boys’ soccer teams, 85 compared with 46.

Beginning this school year, Massachusetts middle and high schools are required to report head injuries and suspected concussions to the state Department of Public Health. Officials say the information will be crucial in helping them understand more about head injuries in school sports.

Marshfield and Newton South high schools had the highest reported number of head injuries, combining football and soccer, with 27 apiece. Lexington was the second highest with 24, Duxbury had 20, and Wakefield had 18. The numbers combine all levels that a program offers - for example, varsity, junior varsity, and freshmen- for each sport.

In all, the Globe survey found 338 head injuries at 26 of the top athletic programs around the region. Officials at several of the schools said the numbers reflect the work they’ve been doing to raise awareness of concussions.

“We’ve been really out in front on this,’’ said Naomi Martin, athletic director in Lexington, which has given cognitive testing to all students in contact sports for four years. “The numbers don’t concern me. They are just indicative of having a good communication system in place with the students, the coaches, parents, nurses, training staff, athletic director, and counseling department staff.’’

Marshfield football’s head injury rate last fall was about double what it was the year before, said Lou Silva, Marshfield’s athletic director and head football coach. He attributed the increase to players overusing their heads because high-tech helmets give them a false sense of confidence, and in a few instances, to overreaction by players who had received a blow and wrongly “self-diagnose’’ a concussion.

“You’re better off trying to report it and go through with it, but I still think there’s a small fraction out there that are a little too overcautious, just a smidgen,’’ said Silva. Still, he said he supports the law.

“If you’re going to enact something like this, you have to jump in with both feet,’’ said Silva. “You’ve got to protect the kids.’’

The new rules, an outgrowth of legislation passed in 2010, require schools to provide annual training to students, parents, and staff on how to recognize and respond to head injuries. Injured students must return to play gradually, and only after medical clearance.

Parents must also notify schools of any head injuries students sustain outside of school-sponsored sports, and those numbers are reported to the state as well.

The law applies to public middle and high schools as well as schools subject to the rules of the Massachusetts Interscholastic Athletic Association. The schools are required to report annual totals for all extracurricular athletic activities to the Department of Public Health after the school year ends.

The numbers of onfield head injuries among football players collected by the Globe from 26 high schools are consistent with what is seen at high schools nationwide, according to Robert Cantu, clinical professor of neurosurgery at Boston University School of Medicine. For each concussion recognized in football, however, he estimated there are six to eight that go unreported.

The numbers collected by the Globe showing more girls than boys reporting head injuries in high school soccer also hold true across the country, he said, though the cause is murky. The trend is repeated in study after study, “whether that’s because the girls are more honest - and that’s probably it - or in addition have weaker necks that set them up to be more easily concussed,’’ said Cantu.

Girls’ varsity coach Nancy Slocum said concussions can happen when players collide while trying to head the ball, or on the follow-through. Practice can help athletes gain more control over their bodies so they are less apt to get hurt, she said.

This year for the first time, her school conducted ImPACT testing, a computerized cognitive test used to help evaluate when an athlete is ready to return to play. It is not required under the new law but is in use by many high schools.

“I see kids really understanding much better that they have to stay out,’’ said Slocum. “I think kids in the past have been eager to get on the field, and they still are . . . but they understand that they really have to follow doctor’s orders.’’

The district is already doing more than what’s required, Obremski said, with free physicals, a doctor at every football game, and ImPACT testing planned for the first time this spring.

The Massachusetts Interscholastic Athletic Association hasn’t planned what to do with the new concussion data, said Alan Ashare, a physician and chairman of the group’s Sports Medicine Committee. But the MIAA could look for patterns, such as whether a school’s lower number may be linked to the type of helmet or mouthguard it uses.

“I think it will be valuable data,’’ Ashare said. “If you see less injuries, why are you seeing less injuries?’’

He said there are four ways to minimize concussions or any injury: using proper protective equipment, examining the rules of the game, practicing good coaching techniques, and being aware of the potential for injury.

Game officials have to do their part, too, he said.

“I think that it’s important to call the penalties that exist,’’ said Ashare. “The purpose of some penalties is to eliminate potentially very dangerous or even catastrophic actions, like checking from behind and elbows to the head.’’

In Arlington, a group of parents unhappy with the football program’s older helmets successfully pushed for a warrant article for new helmets that will appear before Town Meeting voters this spring.

Gary Molea, the athletic director for Lynn English High School, which recorded 10 head injuries in football and one in girls’ soccer, said helmets can make a difference. After Lynn bought new helmets for its high schools, the number of football concussions dropped this past season, he said.

But Molea said coaches need more help, and he’d like to see the MIAA require trainers at all sporting events. Trainers have more training than coaches when it comes to recognizing concussions, he said. “You can’t drop this on the coaches,’’ he said.

Hopkinton parent Tricia LaCascia believes the new law has made a difference. Her son Sam suffered a concussion at the end of his freshman football season, and a second one this past fall as a sophomore.

Even though she said his symptoms didn’t seem as bad after the second injury, she took him to the doctor because he needed medical clearance before he could play again. The sophomore was held out of football practice for two weeks, and wasn’t back in a game for three weeks.

“I’m actually thankful we were required to do all this stuff this year, because it forces you to address it in the right way,’’ LaCascia said.

“It definitely has given me a different outlook on what I’m doing to myself,’’ her son said. “I don’t want to mess myself up or anyone else. I still play the same way I used to, but I have that background knowledge now.’’

Silva, the Marshfield athletic director and football coach, said coaches are coaching differently because of the new awareness.

“They’re putting more emphasis on doing things the correct way,’’ said Silva, who has been with the program since 1973. “They’re spending more time on keeping the head away from contact, using the body, the shoulders, and staying away from any initial hit with the head.’’

The inside of helmets can be inflated to adjust to a player’s head, but some players let the air out for comfort, making them too loose. Silva says he often walks around with an air pump to reinflate the helmets.

Parents often ask him what type of helmet to use. But Silva says there’s no helmet that can eliminate risk entirely.

“You’re going to get hurt playing football,’’ said Silva. ‘And if you don’t, you’re one lucky person.’’ 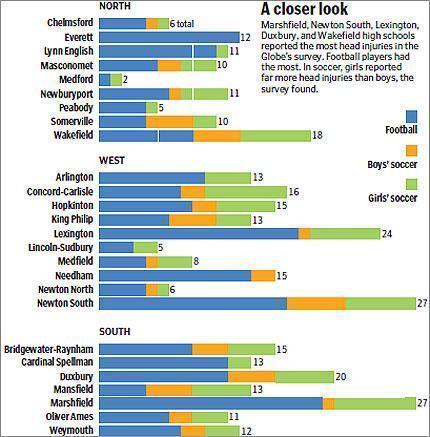