A shocking new way to play: face to face

In an Internet age, a board game club changes the pace 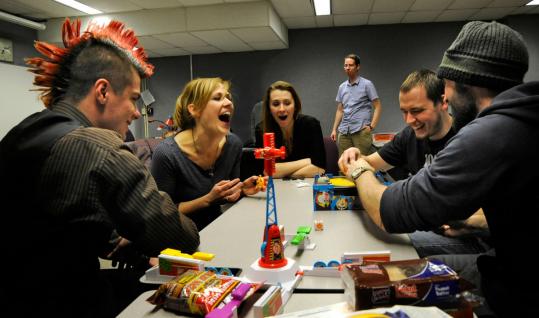 Bowie is talking about the school’s new board game club, the Bacon Boardgamers, which meets the first and third Friday of each month from 6:30 to 9:30 p.m. to play the aforementioned games, as well as Loopin’ Louie, Who Would Win, and Bohnanza.

“You really connect with people,’’ she said. “You’re not in front of a computer or playing video games or getting yourself into trouble. And you get to play games you never experienced before.’’

Mick Galuski, owner of Toy Soldier in Amesbury, which sells games and comics, said there has been an increase in the popularity of board games among the college-aged set for a few years.

“Geek culture has come to the foreground,’’ he said.

Mike Cross, a Northern Essex chemistry professor who started the club, sees it a little differently. “Board games allow for relaxation, while promoting healthy competition, mental stimulation, and social interaction,’’ he said.

“Especially now, with everybody plugged into their iPod and Facebook all the time, it’s a nice change of pace to stop and talk to people face to face. You pick up important techniques that are useful in your life, like quick recall, and spatial reasoning.’’

Cross has for years been using board games for educational purposes.

“I teach chemistry, which is not always the most exciting topic,’’ he said. “I have always loved games, so I started bringing some in to explain complex concepts.’’

Take the Heisenberg uncertainty principle, which states that it is impossible to determine with perfect accuracy both the position and momentum of a particle at any given point in time.

That’s where Loopin’ Louie comes in. The game involves a flying plane that players try to keep from knocking chickens off a wall by hitting a paddle to change the position of the plane.

“The plane is an electron going around an atom,’’ Cross said. “As soon as you measure where it’s at, you change its position. It’s complex, but the students can then visualize it.’’

After playing games in the classroom, some students approached Cross about starting the club. There are about 20 members, and there is no fee to join or come by the B Building, Room B306, and play.

Players don’t have to be Northern Essex students to join the games. Cross said a computer analyst who found the club online came to a meeting, as did a former soldier who missed playing games when he came home from overseas.

Cross said the group is “diverse. . . . people who ordinarily wouldn’t meet or get together.

“There are a variety of games, so you can play a nice leisurely game and not think a lot and relax and have fun. Or there are games that are fast-paced, intense, and exciting.’’

Playing time can range from minutes to hours.

Galuski said many of the popular games are created in Europe. Many have varying set-ups and goals a player has to achieve to win, so every time the game is played, it’s different. That keeps players interested and coming back.

Because the games can cost $50 or more, the club - with the help of a $500 grant - has started a board game library at the college. The fee is $2 per game for a two-week rental or $25 for a year of unlimited rentals.

Club members also plan to visit the Hill View Montessori Charter Public School in Haverhill to lead a weekly board game enrichment program there for fourth- through sixth-grade students.

“It goes with the Montessori curriculum and philosophy of having an opportunity for kids to build critical thinking skills,’’ said Ruthann Goguen, the school’s executive director. “It’s learning new rules, putting them into practice, and getting the strategy down, all in a social situation.’’

Abby LaBonte, 28, of Newburyport, a biology-nursing student at Northern Essex, grew up playing classic board games and is secretary of the club, which recently voted to move meetings to Friday night.

“I love it. It’s great,’’ she said. “We used to meet Wednesday nights and that was fun, too. But it’s even better knowing where you are going Friday nights and that you’re going to be with people you have already bonded with. We don’t need to do anything else but spend time together and play board games.’’

Wendy Killeen can be reached at wdkilleen@gmail.com.

Life in Game Land
In 1904, Elizabeth Magie, a Quaker woman from Virginia, received a patent for a land and taxation board game called The Landlord’s Game.
Parker Brothers considered publishing it in 1922, but rejected it as too complicated. The game found a following, though, among college economists, and people, including Charles Darrow of Pennsylvania, began making personal copies and prototypes of it. In 1934, with Magie’s consent, Parker Brothers published Darrow’s version of the game, called Monopoly.
Since, an estimated 500 million people have played Monopoly and more than 200 million games have been sold worldwide. It is still the best-selling game in the world, produced in 14 languages and sold in 103 countries.
Other popular games through the years
The tough economy the past several years has also fueled the board game industry, as people are opting to stay home rather then going out for dinner or a movie. But the types of games have changed, especially among players in their 20s and 30s.
Clue, 1944
Scrabble, 1948
Candy Land, 1949
Risk, 1959
Password, 1962
Uno, 1971
Trivial Pursuit, 1982
Today’s popular games
The Settlers of Catan, 1995
Munchkin, 2001
Last Night on Earth: The Zombie Game, 2007
Agricola, 2007
Dominion, 2008
7 Wonders, 2010
By the numbers
$21.18 billion: Retail sales of toys, including games and puzzles, in 2011
$16.6 billion: Sales of total video game content in 2011
$50: Average cost of today’s new strategy board games
$60: Average cost of video games
49,000: The variety of board games currently available worldwide.
SOURCES: NPD Group, hasbro.com, and other websites
COMPILED BY WENDY KILLEEN