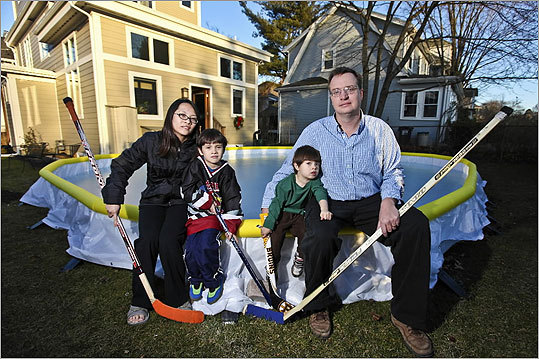 CAMBRIDGE - Gavin Peters came home last week to find a note on his door. It was from a Cambridge city inspector, and it asked Peters to call him “regarding your pool.’’

On Friday, his “children’s wading pool,’’ as the inspector referred to it, received six citations for violating the city’s building, zoning, and sanitary codes, and Peters was given seven days to remove it.

The problem, said Peters, is that he does not have a pool in his yard. He has an ice rink. Or at least he was supposed to.

This weirdest of winters is far from frozen, and the Peters citation is just the latest sign of a season that isn’t.

Getting fined for a pool in February was certainly not the dream Peters signed up for that day when he saw a photo on the Internet of a father and his family on a backyard rink with the snow falling. It was not the plan when he pulled out a credit card and spent $1,700 on a kit of snap-together plastic boards and supports from a company in Wisconsin. And it seemed impossible when he did his detailed weather research - he is an engineer at Google - and figured he would get between 40 and 60 skating days.

“I had this great vision that I’d be out there at night with my boy,’’ he said.

And that vision came true, when he was finally able to skate with his 5-year-old son, Nick.

“It was great,’’ he said. And it lasted for exactly an hour and fifty minutes on Jan. 20.

Word of a rink being cited as a pool quickly spread and became the talk of the backyard hockey world, a rapidly growing subculture that has suffered all winter from good, er, bad weather.

“It’s not just backyard people who are outraged; it’s anyone with common sense,’’ said Joe Proulx, a blogger who dissected the citation on his website, backyard-hockey.com. “Do we now start going after sandboxes? It’s a little bit ridiculous.’’

In this winter of their discontent, the outdoor skating community has spent a lot of time together online, commiserating about such things as the large pond hockey tournament in Buffalo that was converted into a street hockey tournament. Over the weekend, as icy cold forecasts failed to materialize, Peters’s citation became a rallying cry for frustrated rink builders, who feared other municipalities will look at their unfrozen rinks and start clamping down.

On its Facebook page, NiceRink, the company that sold Peters his kit, put out a call for hockey-loving lawyers to help fight the citation and even offered to help pay for his legal defense.

Peters admits he did not look closely at the city’s codes before erecting the rink, “but I did know there was no building code permit required for playground equipment, and that’s what they’re considered in Toronto’’ where he and his wife, Kimberly, grew up. “I just figured this was the same as a swing set or a soccer goal,’’ he said, and prepared to mount his defense there.

The last time such an issue was raised locally was in 2008, when a neighbor complained to the city of Brookline about an unfrozen rink behind Jon Frankel’s house, making the “pool’’ argument and citing concerns about such things as West Nile virus.

“The city had a meeting about it and said it was fine,’’ Frankel said, adding that the same neighbor now calls the police on him constantly for noise complaints. “I guess he hates the sound of kids playing,’’ he said.

The state’s building code defines a pool as a structure that contains water over 24 inches deep; Peters’ boards are only 18 inches high, and the water level is 8 1/2 inches at its deepest point, he said. But the citation he received made no mention of a pool, but instead cited him for a range of other infractions to the building, zoning and sanitary codes.

On Monday, with Peters getting ready to fight the removal notice - “Nick said he would like to go to the hearing so that he could explain to them that I built it so he could play’’ - he said he had a conversation with Ranjit Singanayagam, the commissioner of inspectional services for Cambridge, and convinced him to rescind the violation.

“He was really polite, and he agreed that it was playground equipment,’’ Peters said of Singanayagam, who refused numerous interview requests from the Globe.

With the city troubles out of the way, Peters said his biggest concern is next year. He plans to take down a small tree to expand his rink a few feet, but there is nothing he can do about this region and its horrible weather.

“The only thing I’m guilty of is living too far south,’’ he said. “I don’t know why I moved to this tropical country.’’