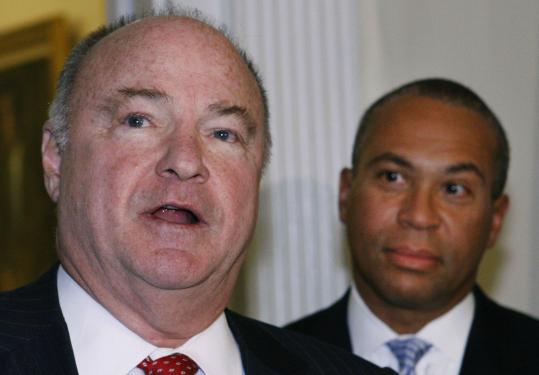 The widespread perception that the Suffolk Downs casino proposal, with its strong political backers, has a lock on development rights for Eastern Massachusetts may be discouraging some casino companies from competing in what is expected to be the state’s most lucrative gambling market, specialists say.

Only one developer, Steve Wynn of Las Vegas, has stepped forward to compete with Suffolk Downs for the single license available in the eastern part of the state. That pales in comparison to the free-for-all in Western Massachusetts, a smaller market that has drawn signficiantly more interest from casino companies.

“At this point, most people [in the industry] believe that Suffolk Downs has it locked up,’’ said Roger Gros, publisher of Global Gaming Business, a trade magazine that covers casino gambling. “That’s pretty much the opinion right now, that they’ve got it.’’

The head of the state’s gambling commission is adamant that the process will be open and fair, and that any assumptions about Suffolk Downs are completely unfounded.

But the sense of inevitability has been enough to give pause to casino mogul Sheldon Adelson. The Boston-born chief executive of Las Vegas Sands and the 16th-richest person in the world, according to Forbes Magazine, is hesitant to bid for a casino in his native state because he believes that the fix is in for Suffolk Downs, the billionaire told Global Gaming Business for a December article.

The perception that the competition is over before it even formally begins runs contrary to the intention of the state’s new casino gambling law, which was designed to promote competition among developers in three geographic regions of the state, in order to attract the most lucrative and innovative projects.

In the western region, the law has had its intended effect.

At least five casino companies are competing, or expected to compete, for development rights to a casino in Western Massachusetts. Mohegan Sun, MGM Resorts, and Ameristar have each chosen locations in that region, while Hard Rock International and Penn National Gaming are tentatively linked to Western Massachusetts sites.

“Wynn always goes against [conventional wisdom], so I wasn’t surprised to see him jump in with Kraft,’’ said Gros. “He dances to his own tune, that’s for sure.’’

Although several landowners in the eastern region are publicly marketing their sites for casinos, no other gambling company has joined Wynn in public competition against Suffolk Downs.

The southeastern region also lacks competition at the moment, but that is by design. State law delays bidding on a casino license in the southeast until at least August to give the Mashpee Wampanoag tribe time to make progress toward winning federal approval for a tribal casino in that region. The deference to the tribe is being challenged in federal court.

The perception that Suffolk Downs is a lock in Greater Boston is longstanding, predating the legalization of casino gambling in Massachusetts.

Two days before Governor Deval Patrick signed the legislation last November, the Las Vegas Review-Journal, a close observer of the casino industry, wrote that Suffolk Downs “is all but assured the license for the lucrative Boston market,’’ due to support from key Massachusetts politicians and the Bay State ties of Caesars chief executive Gary Loveman.

Loveman lives in Wellesley, holds a doctorate from MIT, and is a former Harvard Business School professor.

Menino has been outspoken in supporting the Suffolk Downs location, and casino officials say they got the message.

“If you look at an area like Boston, there is no doubt that is going to be a magnificent gaming market,’’ said Troy Stremming, a senior vice president for Ameristar, which is proposing an urban casino in Springfield. “But when you step back and look at all the cards that have been played, there’s no doubt that Caesars was out of the gate before anyone else and certainly has a foothold in that market.

“Then it gets taken up to the next level when the mayor comes out and says, ‘I think that this casino should be located at Suffolk Downs.’ To us, as a potential operator or applicant, that message was pretty loud and clear.’’

Menino spokeswoman Dot Joyce said it is flattering that people take the mayor’s opinions seriously, but she denied that Menino is discouraging competition, citing the Wynn proposal.

As much as local politicians may support Suffolk Downs, there is only so much they can do to help it. The casino law put the authority to grant casino licenses in the hands of the new Massachusetts Gaming Commission.

“Any suggestion that this process is somehow wired is absolutely and totally false,’’ said Stephen Crosby, the designated chairman of the commission and so far the only person named to it. “We don’t even know who four of the five commissioners will be. We don’t know yet what the selection criteria will be.’’

Crosby said the commission, once in place, will encourage competition among casino companies. “I would hope no prospective operator would elect not to participate in Eastern Mass. due to a [misperception], because it is absolutely not predetermined,’’ he said.

It will be the job of the Gaming Commission to choose the winning casino proposals, and neither Menino nor any state lawmaker controls who sits on the panel. Crosby was appointed by Patrick. Attorney General Martha Coakley and Treasurer Steven Grossman will each name one member. Patrick, Coakley, and Grossman will jointly pick the other two members. The deadline for appointments is March 21.

Representatives of Wynn and Kraft declined to comment yesterday. In a brief interview in Boston Tuesday, Loveman said he could not comment because securities laws require that he stay quiet on company business following Caesars’ stock offering last week.

Suffolk Downs chief operating officer Chip Tuttle responded to questions about competiton in the Greater Boston region with a statement:

“As we work to earn a license to develop a world-class resort here that will create thousands of good new jobs and benefit the local economy, we have the advantages of a superior site in one of the most-visited cities in the world, proximity to New England’s largest airport, best-in-class partners, strong community support, and a 77-year track record as the state’s premier gaming destination.’’