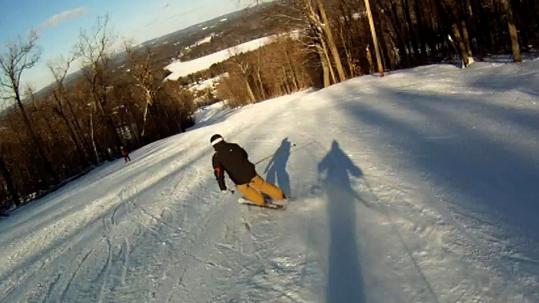 PRINCETON - William Milner, 17, from Lincoln, R.I., bought his $300 waterproof-cased helmet camera two months ago, and with that purchase joined a YouTube generation of consumers who are taking the home movie phenomenon to a new level.

The videos he has posted online blow away anything his family used to shoot on VHS tapes and share. With the lightweight, high-definition helmet cam, he can create a digital-video diary of thrills, chills, and the occasional spill or two as skiers and snowboarders zoom down the mountainside.

“You get a lot more action than you do on most family vacation videos, that’s for sure,’’ Milner said as he waited to board a chairlift at Wachusett Mountain, camera attached to his helmet like a hood ornament on a luxury sedan. Other skiers and riders, he added, are more apt to ask about the footage he is getting than about snow conditions or which trails to try.

The helmet cam - which can be affixed to helmets, ski poles, and jackets - has become the must-have gear at ski resorts this winter. Sales tripled from 2010 to 2011, to 1.3 million units, according to Chris Chute, a research manager with the Framingham office of International Data Corp., a global market research firm. The devices, known as hands-free or wearable video cameras, generally retail for $200 to $400, depending on the model and accessories.

Much of that growth, says Chute, is attributable to GoPro, the industry leader, moving into national distribution. Manufactured by a California company called Woodman Labs, GoPro’s latest model, the HD HERO2, debuted in 2011. GoPro also boasts its own YouTube channel (more than 63 million views) and Facebook page (1.36 million “likes’’) and has capitalized on the ease with which action videos get passed around online.

“There’s been a lot more viral marketing,’’ said Chute as the cameras’ popularity has rapidly spread from extreme-sports types to recreational skiers and snowboarders of all ages and abilities, and to other video-friendly action sports like mountain biking, surfing, and skydiving.

Although GoPro owns the market’s most recognizable brand, it is not alone in catering to these outdoors video enthusiasts. Contour makes a similarly priced (about $300) model that has caught on with people like Jon Oliff, 23, an avid snowboarder who is spending this winter working and riding in Killington, Vt.

Oliff bought his camera two months ago. It features a built-in GPS and iPhone connection that allows him to change camera settings on the fly. Oliff has shot more than 50 hours of action footage, uploaded to his computer and edited into 5-minute clips. Many are posted on his Facebook page, while others get shared with a smaller circle of friends.

Does video recording have any effect, positive or not, on his snowboarding?

“Sometimes I push myself a little more,’’ Oliff conceded, “but it doesn’t really change how I ride. And it’s so lightweight, you don’t really think about it much while you’re riding.’’

Phillip Russell, 46, an account manager for a technology company and part-time ski instructor at Loon Mountain in Lincoln, N.H., is another helmet cam devotee. Russell, who lives in Nahant, is so enamored of his own camera, he bought one for each of his sons, ages 11 and 9, before the ski season began. Three others in his junior ski group turned up with helmet cams this year as well. The cameras give doting parents like Russell the ability to watch their children attempt maneuvers, such as their first “french fry’’ parallel turn.

“People ride up with you in the chairlift asking, ‘What have you been shooting?’ ’’ said Russell. “Last year, I knew of one family that bought a [helmet cam]. This year I’m seeing maybe 50 on the mountain at any given time.’’

For parents who might not ski themselves, or who head off elsewhere to enjoy a day on the slopes, he said, there is the added satisfaction of watching what their children have been learning on the mountain while they are away.

If there is one drawback to using the camera, according to Russell, it’s finding time to organize the clips he has shot. Of the 1,800 videos he has recorded over the past year - the vast majority of them skiing videos - very few have been reviewed and edited.

“I am labeling it all file by file, though,’’ he said, “so I can search and find the data later.’’

Ski areas like Wachusett have been discovering other uses for these cameras. Each morning, workers shoot and post video clips on the mountain’s website to show current snow and trail conditions. Averaging about 1,000 views daily, these videos have largely replaced the toll-free phone number that skiers used to call for snow reports, said Wachusett marketing director Tom Meyers.

Last winter was the first time helmet cams became prominently noticeable on the mountain, said Meyers. Now, not only are they sold in the base lodge ski shop, but they have become so ubiquitous that privacy and liability issues have been raised by their presence. In one small sign of the changing times, a notice has been posted on the front door of the mountain’s Ski Patrol hut this year: “No Video Past This Point.’’