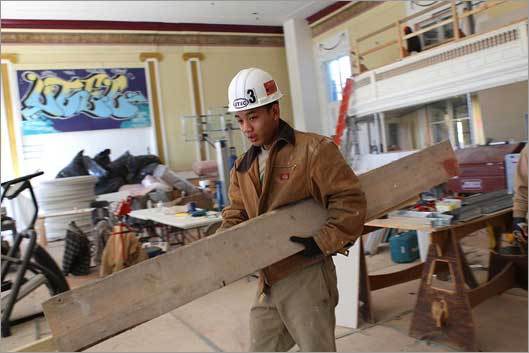 (Joanne Rathe/Globe Staff) Tommy Sam, 20, joined the Equality Center’s workforce program in the fall of 2010 and got his GED last June. He’s now focused on working and saving money to enroll at a college to study auto body repair.

When Xavier Hardin stopped showing up to his job-training program at the United Teen Equality Center in Lowell early last year, he began getting daily visitors at home.

It was the center’s street team workers wondering when he’d be coming back.

But he wouldn’t, and the knocks at the door continued. It was a far cry from his situation just a few years earlier at 15, when he spent a good part of a 2 1/2-year sentence for masked armed robbery under house arrest. None of his fellow gang members ever stopped by to see him. And although he said he’d lost respect for them during that time, he still hung out with them after serving his sentence and being ordered by a judge to perform community service.

The court order was the reason Hardin found himself in the Equality Center’s Workforce Development program, which targets Lowell’s most at-risk or violent high school dropouts ranging from 16 to 24 years of age. The program is a combination of workforce training, education, and case management, and it is designed with the concept of relapse at its core, said Gregg Croteau, the center’s executive director.

“We know if we’re going to be a program that is going to work with the most difficult young people, the most disengaged young people in the city, we have to know that it might not take,’’ Croteau said. “It’s not necessarily just a second chance. It could be five, six, seven chances before they get to that.’’

Although the center has had workforce training for eight of its 12 years, the current modelwas adopted within the last year and a half, and serves approximately 100 young people. Of those, 82 percent have criminal records or pending court cases; 47 percent are involved in gang activity; 33 percent have no stable housing; and 25 percent are parents, Croteau said.

Once in the program, the young people work with a “transitional coach,’’ or a case manager; are required to enroll in the center’s GED program; and are assigned a maintenance job at the center, said Sako Long, supervisor of the Workforce Development program. Participants are paid a starting wage of $8 an hour, and are allowed to choose job training in painting, construction, or culinary arts only after they show up to their maintenance job for 30 consecutive days and pass “soft skills’’ performance reviews, ranging from maintaining proper eye contact to learning how to talk to a supervisor.

“We’re consistently on them on that, and we hold high expectations and high standards to make sure that these are great habits that they build,’’ Long said. “We know that once they have these habits, we can send them out to the community and they can be employable. And if they can’t have those habits, we need to make sure that we break all the bad habits here.’’

Some, like Cynthia Cortijo, are fast learners. Just 2 1/2 months since entering the program, Cortijo, 21, is on her way to getting a GED, has gone from the maintenance to the painting crew, and has overcome a lifelong problem with shyness. She dropped out of school at 15 after giving birth to her daughter, Rosa.

“I was just letting my future just pass by me until one day I woke up and I was looking at my daughter and I decided I need a better future for her,’’ Cortijo said. “I’m actually grateful to have all these opportunities that actually teach me some new [skills].’’

Tommy Sam, 20, a member of the maintenance crew, is also motivated by his daughter, Pina. He dropped out of school at 15, shortly after her birth, opting to hang out with friends and use drugs while living in Sterling, Va., with his mother, stepfather, and two younger stepbrothers. A little over two years ago, Sam was charged with breaking and entering a neighbor’s house and was sentenced to six months in jail and six months in a drug rehabilitation facility.

Although rehab helped, Sam couldn’t hold a job and his relationship with his mother deteriorated to the point that she sent him away to live with his father in Lowell in late 2010. He joined the Equality Center’s workforce program that fall and got his GED last June. He’s now focused on work and saving money to enroll at a college to study auto body repair.

“I’m really happy for UTEC, because what I couldn’t get in two or three years, UTEC helped me get that in less than a year,’’ Sam said. “They helped me mature and just gave a lot of good feedback, of which I didn’t have growing up.’’

For Hardin, or X, as he is known, the hardest habit to break wasn’t leaving his gang, which he did, but the lure of easy money.

“I went back to selling weed,’’ Hardin said. “I was continuing to make my money the fast way.’’

That’s when the door knocking from UTEC’s street team began, but Hardin didn’t come back to the program until he was robbed and left completely broke. He was assigned to the painting crew, which was working in partnership with professional construction crews, including the New England Carpenters Training Center at UTEC’s Hurd Street headquarters.

The 173-year-old former church building the organization purchased in 2006 is in the process of being converted into a sustainable, energy-efficient building, as well as the oldest LEED platinum-certified building in the country, Croteau said. The building, as well as its new addition, could be ready for a grand opening by fall, he said.

Since then, Hardin has obtained his GED and has been promoted to the construction crew, most recently helping to put new energy-efficient windows up. He’s hoping to graduate from the program and save enough money to study business administration in college, and parlay that into learning the ins and outs of the music industry. About a year ago, Hardin uncovered and honed his skills singing hip-hop, and has quickly become one of the most popular artists in the local club scene.

“I want to focus on my music career, but at the same time I want a fallback plan, whether it be construction, culinary, or multimedia,’’ he said. “In UTEC . . . they let me know that I’m doing something right, and if I’m doing something wrong, they tell me how I can improve on it. . . . It makes me work harder.’’

The idea of sustainability is at the core of UTEC’s mission, not only for its building and finances, but for the people they serve, Croteau said.

“We’re pushing young people, pushing themselves so they can lead sustainable lives,’’ he said.