No say for some who would be casinos’ neighbors

In nearby communities, a feeling of frustration 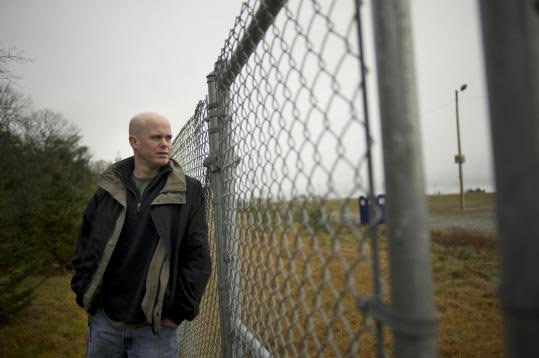 A fence separates Mike McCarthy's property from Gillette Stadium, but the South Walpole resident will have no right to participate in a vote on a casino proposed on land adjacent to the stadium. That is because the planned casino site is in next-door Foxborough and the vote would be restricted to residents there. (Boston Globe Photo / Gretchen Ertl)
By Mark Arsenault Globe Staff / February 8, 2012
Text size – +

WALPOLE - Mike McCarthy lives close enough to a Gillette Stadium parking lot to smell the hibachi grills on game day. He does not mind Sunday tailgaters a few hundred feet from his house, but he draws the line at a billion-dollar casino.

Though he lives closer than almost anyone to the proposed site of a casino, he will not be allowed to participate in a local referendum if the project makes it to a vote. The casino would be in Foxborough; McCarthy lives just over the town line, in South Walpole.

“We don’t get a say,’’ said McCarthy, who has lived behind the stadium parking lot for about two years. “We would have to put our faith in the people of Foxborough, and that is a very powerless feeling.’’

The state legislation that paved the way for casino gambling in Massachusetts, signed by Governor Deval Patrick in November, gives tremendous power to local residents to decide if a casino will be built in their community: No casino project is eligible to compete for a coveted state license until voters in the host town - or, in large cities, the local voting ward - endorse the project in a referendum.

The legislation, however, gives little say to residents in neighboring towns.

Under the law, casino developers must negotiate agreements with these communities to provide money to deal with traffic and other potential spillover problems, but a neighboring town cannot stop a casino by refusing to negotiate or by asking for unreasonable compensation. The state Gaming Commission can bring negotiations between a developer and a neighboring town to conclusion, “in order to allow the applicant to submit a timely and complete application,’’ according to the law.

This has left some residents near proposed casino sites feeling disenfranchised.

John Ribeiro has been a leading opponent of a casino plan at Suffolk Downs. But he and his neighbors are residents of nearby Winthrop and will not be allowed to vote on the project.

“We have residences in Winthrop that are closer to Suffolk Downs than some places in Revere and East Boston,’’ he said. “We can ask for whatever we want from the casino developers, but when you come right down to it, if East Boston and Revere vote for it, there’s going to be a casino there, whether Winthrop wants it or not.’’

The state law expanding gambling in Massachusetts authorizes up to three resort-style casinos, spread among three geographic areas. The Western region has drawn heavy interest from developers, especially along the Massachusetts Turnpike. The operators of the Mohegan Sun casino in Connecticut have proposed a gambling resort in Palmer; MGM Resorts International, one of the largest casino operators in the world, wants to build next door in Brimfield.

The residents of Monson, a town bordering Palmer and Brimfield, are pinched between the two proposals and will have no vote on either project.

“It’s very frustrating,’’ said EmmaLadd Shepherd of Monson, former co-president of the group Quaboag Valley Against Casinos. “It’s one of the reasons the organization started . . . because we could see what was going to happen.’’

The group has lobbied, unsuccessfully, in favor of voting rights for surrounding communities. “We’re a very small town and we have quite a few towns abutting us,’’ she said, adding that a casino nearby “is definitely going to affect us.’’

In crafting the casino legislation, state lawmakers considered the option of extending the vote to surrounding towns, but decided to let those communities address concerns through the agreements for compensation.

“If we went too far one way, we would give communities that might be impacted essentially a veto power over another community’s ability to establish a business within its boundaries,’’ said state Representative Joseph F. Wagner, a Chicopee Democrat who played a leading role in guiding the casino bill to passage. “If we went too far the other way, we wouldn’t recognize the impacts on communities that would clearly be [affected] by the establishment of this new industry.’’

If voters had the power to block projects in other towns, “it’s possible we’d never have a resort casino,’’ he said. “Impacted communities could for any number of reasons veto another community’s ability to establish a resort casino. That didn’t seem reasonable, and the reality is that would be contrary to what we were attempting to do by bringing this new industry on line.’’

In Boston, neighboring wards may also be denied a vote on a Suffolk Downs casino. Under state law, proposals in Boston, Springfield, and Worcester can proceed with approval of just the local voting ward, unless the mayor and city council choose to expand the vote citywide.

In Springfield, is planning to compete for development rights, and Mayor Domenic J. Sarno has already called for a citywide vote.

But in Boston, Mayor Thomas M. Menino insists that only voters in East Boston, the neighborhood most directly affected, should have a say in the construction of a casino at Suffolk Downs.

Councilor Matt O’Malley, who represents West Roxbury and Jamaica Plain, is urging a citywide vote. He said his constituents deserve a say on any casino proposal within the city.

“Constituents of mine, and of all of my colleagues, should have the right to vote on this because it is clearly something that will affect the entire city of Boston, for good or ill,’’ he said. “I say this as someone who is supportive of casinos and would likely vote in favor of one. The fact of the matter is we all pay taxes, which pay for the police and the fire and the infrastructure and all the services.’’

A citywide vote, he said, “would also make the whole process more transparent, cleaner, and better in the long run.’’

“I applaud the mayor of Springfield for calling for a citywide vote because it really does affect the entire city,’’ he said.