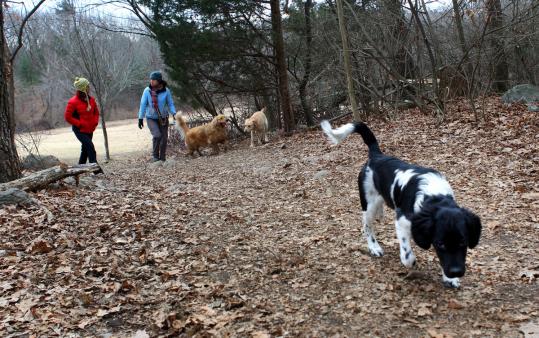 For 40 years, Ann Tolkoff never imagined seeing a coyote in her hilltop neighborhood near Coolidge Corner, a densely settled area where the Prudential Center is in clear view.

But over the past year, the rangy scavenger has become a regular, unsettling presence, foraging through garbage, attacking small pets, even lurking menacingly along residential streets.

“If I let my dog run in my backyard, it could be capital punishment,’’ said Tolkoff, a retired schoolteacher.

As the ranks of coyotes have expanded in the Boston suburbs, where backyards provide an abundant food supply, concern over the influx has risen in kind. In Brookline, Newton, and Belmont, where coyote sightings have become more frequent, residents are urging town officials to take steps to control the population, and increasingly taking precautions with their pets and even young children.

Last month in Haverhill, a coyote bit a 9-year-old girl, only the fifth documented case of a coyote attack on a human in Massachusetts since the 1950s. Last week in Wellesley, coyotes attacked an ailing deer and two dogs in separate events, killing one just outside its owner’s house.

Specialists say that coyotes pose virtually no threat to humans, but that pet owners should not let small dogs and cats run free.

“It’s normal coyote behavior to grab small animals if left unattended,’’ said Linda Huebner, deputy director of advocacy for the Massachusetts Society for the Prevention of Cruelty to Animals. “People need to keep their animals safe and supervised.’’

Wildlife officials estimate that there are up to 10,000 coyotes in Massachusetts and they are widely scattered throughout the Boston area. Although typically associated with the wild, coyotes are highly adaptable and are drawn to safe, dependable food sources such as bird feeders, pet bowls, and unsealed trash cans.

Hamel sees coyotes daily, and said residents who are uneasy at their proximity often have only themselves to blame.

Coyotes are instinctively afraid of humans, wildlife specialists say, but over time become more comfortable unless given reason to feel otherwise.

“Most of the time coyotes are not getting the message that people can be a threat,’’ said Marion Larson, outreach coordinator for the state division of fisheries and wildlife.

Specialists say coyotes are easily scared off by loud noises, having objects thrown at them, or being sprayed with a hose.

But many, especially those caught off guard by an encounter or afraid the coyote might respond with aggression, simply let the animal be. Eventually, coyotes realize they have little to fear and before long are strolling through backyards like they own them.

Over time, that boldness can lead to increased aggressiveness, specialists say. On rare occasions, such coyotes will approach pets on a leash and approach or follow people.

In those cases, residents should report the incident to animal control, Larson said.

Concern about coyotes has spurred calls to remove or destroy the animals, but officials say such steps would be counterproductive, and say peaceful co-existence is the only solution.

“We can’t possibly solve problems with coyotes by killing them,’’ Huebner said. “They’ll simply expand their range and breed more.’’

By law, wildlife officials can only destroy an animal if it is determined to be a public safety threat. Attacking an unattended pet does not qualify, Huebner said.

Coyotes can be hunted and trapped in boxes, but leg traps for recreational use are banned.

Residents like Tolkoff say aggressive action is needed to ward off a growing incursion.

“We’ve lost four cats on my street,’’ she said. “And neighbors have complained coyotes have followed them. It’s changed our quality of life.’’

In Wellesley, dog owners said coyotes are regular visitors to Centennial Reservation, a popular walking area, but tend to keep to themselves.

Maggie Wilson said her dog Cooper, who weighs in at over 100 pounds, has been known to chase them.

“Keep Centennial safe, Cooper!’’ Wilson said as the unleashed dog bounded off across the open field.