DiMasi may testify to US panel 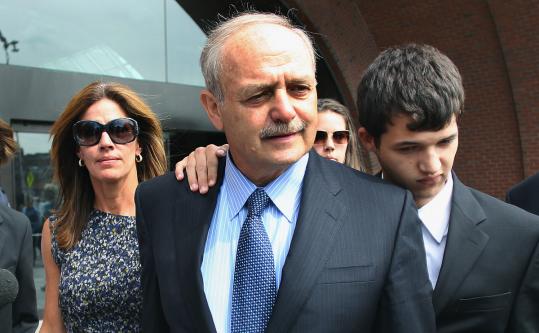 Barely two months after starting his federal prison sentence, disgraced former House speaker Salvatore F. DiMasi is returning to Massachusetts to testify before a federal grand jury in Worcester, according to a person with direct knowledge of the arrangement, raising the possibility that he may soon provide evidence against his former legislative colleagues in a public corruption probe.

The specific focus of the grand jury could not be confirmed yesterday. But lawyers for US Attorney Carmen M. Ortiz have been presenting evidence to a Worcester grand jury for months in her investigation of rigged hiring and promotion practices in the state Probation Department.

“People are in a state of shock that he’s coming back to testify,’’ said one Beacon Hill lobbyist, who asked not to be named for fear of damaging business relationships. “There are a lot of nervous people around.’’

DiMasi, who served as speaker from 2004 until he was forced to resign in 2009, was one of the main beneficiaries of favoritism in the Probation Department, according to a 2010 independent counsel’s report, obtaining jobs or promotions for at least 24 candidates he supported. DiMasi was so important to John J. O’Brien, the former probation commissioner, that he kept a special spreadsheet of DiMasi’s preferred job candidates titled “DiMasi, Speaker Sal.’’

Grand juries, which are convened by prosecutors to collect evidence for potential criminal charges, conduct their work in secret. As a result, it is possible that DiMasi is to testify in another federal investigation.

Current and former elected officials were stunned by the news that DiMasi could testify and perhaps provide new firsthand details about the cozy relationship between the Legislature and the court system. Beacon Hill has been abuzz for months with rumors that the probation grand jury may soon indict a dozen or more people, including several current and former legislators.

US marshals have removed DiMasi from the Federal Medical Center in Lexington, Ky., where he began serving an eight-year sentence on Nov. 30 following his conviction for steering state contracts to the software company Cognos. Officially, the Bureau of Prisons lists DiMasi as “in transit,’’ but a spokesman confirmed last night that DiMasi had made it to the Metropolitan Detention Center in Brooklyn, N.Y.

The spokesman, Chris Burke, said that federal inmates are often transported by the prison bus system, making stops at various federal detention facilities along the way.

As a result, a federal prisoner’s trip from Kentucky to Worcester can take days or even longer, and it was unclear when DiMasi is expected to testify.

Thomas R. Kiley, DiMasi’s lawyer in the Cognos case, declined to comment on his client’s movements.

But a person with knowledge of the situation said that DiMasi’s move to Massachusetts is to appear before a grand jury. That person and a second who is familiar with ongoing grand jury proceedings declined to be named because they were not authorized to speak publicly about a confidential grand jury issue.

It is unclear whether DiMasi is coming to Massachusetts voluntarily or against his will. Veteran prosecutors say that Ortiz’s office could grant DiMasi immunity from prosecution in the probation case and compel him to testify before the grand jury.

However, it is possible that DiMasi, 66, may have volunteered to testify in hope of shortening his sentence or improving his living conditions. Under federal rules, US attorneys can request a shorter sentence for an inmate “if the defendant, after sentencing, provided substantial assistance in investigating or prosecuting another person.’’

DiMasi might also be allowed to serve his sentence closer to home in return for cooperation, perhaps even at Fort Devens in Ayer, where DiMasi had originally asked to be incarcerated. Joseph P. Lally Jr., the former Cognos salesman who testified against DiMasi, was recently moved out of Fort Devens to a prison in Pennsylvania, clearing one obstacle to transferring DiMasi to the Massachusetts prison. Prison officials do not normally allow inmates to be incarcerated along with key witnesses against them.

DiMasi was part of the legislative leadership in 2001 when his predecessor, Speaker Thomas M. Finneran, pushed through legislation that gave O’Brien enormous control over hiring and promotion of the probation officers who supervise state inmates when they serve their sentences in the community.

O’Brien, a former jogging partner of Finneran, assiduously courted legislators. In 2010, the Globe Spotlight Team reported O’Brien had turned the department into a virtual employment agency for the well-connected few, funneling at least 250 jobs to friends, family, and supporters of court and legislative officials.

Independent counsel Paul F. Ware Jr., appointed by the Supreme Judicial Court to investigate probation hiring practices after the Globe reports, found that O’Brien had set up a fraudulent hiring system complete with thousands of sham interviews with job candidates when finalists had been selected in advance by O’Brien and his lieutenants.

DiMasi, who became speaker after Finneran resigned amid an ethics probe in 2004, had more success getting his candidates hired or promoted than any other legislator, Ware found. Two-thirds of the job candidates DiMasi supported got the job.

DiMasi was in the middle of a bitter 2008 fight to succeed him when supporters of the losing candidate charged that the winner, Robert A. DeLeo of Winthrop, used probation jobs to persuade legislators to back him. Supporters of Representative John H. Rogers of Norwood said DeLeo, then chairman of the House Ways and Means Committee, helped get money added to the probation budget, allowing O’Brien to hire supporters of DeLeo allies in the speakership fight.

DeLeo adamantly denied that jobs were traded for votes.

A lot would be at stake in any grand jury testimony for DiMasi, who continued to maintain his innocence after he tearfully pleaded for a federal judge’s mercy when he was sentenced. If he is unable to negotiate a reduced sentence, the Bureau of Prisons projects that he will not be free until Nov. 17, 2018, when he will be 73.