After 40 years, Laurie Cabot closes up her shop on wharf 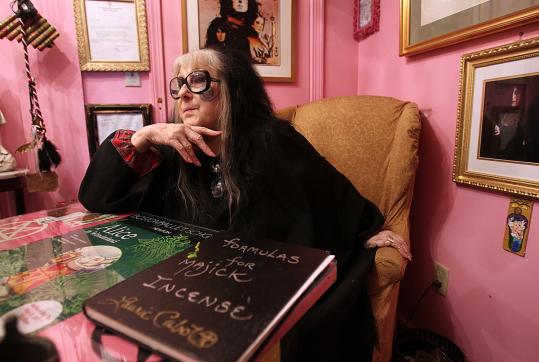 Laurie Cabot was declared the official witch of Salem by Governor Michael Dukakis in 1977. She has run several shops in over the last four decades. (Suzanne Kreiter/Globe Staff)
By Justin A. Rice Globe Correspondent / February 5, 2012
Text size – +

SALEM - For roughly 17 years, Salem’s Pickering Wharf was the Graceland of witchcraft and Laurie Cabot its Elvis.

“It was just constant lines waiting to get in to see her and she signed her books,’’ said Ginny Goldsmith, who owns Crafters Market, across from Cabot’s Official Witch Shoppe. “People would be really excited to see her; they’d be like ‘We just saw her! It was my dream to see her!’

Cabot, who opened Salem’s first witch shop about 40 years ago on Derby Street, locked her doors at 63R Wharf St. on Tuesday for good.

But the 79-year-old is not retiring.

“The online store is doing great, and it’s worldwide,’’ said Cabot, who began selling her homemade merchandise such as bags of incense ($4.50) and bottles of potions ($17.50) online last year.

“It’s definitely a beginning; it’s exciting, really,’’ she said during an interview last week from her store’s back room, where she does healings and psychic readings in a black caftan, oversized black glasses, and black eye makeup.

“It has changed, but we’re not going out of business at all. It’s escalating.’’

Cabot said tourism in the Witch City has dipped to the point where a brick-and-mortar store is no longer sustainable. While Salem saw slightly more than a 10 percent increase in tourism this past October from the previous October, according to Salem Regional Visitor Center statistics, the city’s tourism industry on the whole took a hit during the recession and is steadily climbing back.

“In 1970 I opened the first witch shop in America - it became a destination,’’ Cabot said. “With tourism down, it’s very slow.’’

Born in 1933 in Wewoka, Okla., while her parents were en route to California, Cabot says she first experienced psychic abilities when she had a vision of a boy falling off his bicycle onto a train trestle. The 7-year-old’s mother called the sheriff and the boy was rescued, Cabot said.

Four years later, Cabot’s mother split from her husband and moved her daughter back to her native Boston, where they met a woman at the Boston Public Library who claimed to be a witch. Cabot studied under the woman until she was 16 but eventually started dancing at Lou Walters’ (Barbara Walters’ father) Latin Quarter nightclub.

Cabot didn’t practice witchcraft openly until shortly after she found herself a 30-year-old divorcee with two young children, in the late 1960s. But she concealed her religion again after a friend urged her to move into a Federal-style house across the street from the mayor of Salem in 1969.

“Well, they hung people here. I didn’t know how they felt about witches,’’ Cabot recalled. “There weren’t any witches going, ‘I’m a witch.’ ’’

She maintained her anonymity until her black cat was stuck in a three-story tree for three days. Cabot says she called the police and fire departments, only to be told it was against their union rules to rescue cats. When the Animal Rescue League refused to help, Cabot called the local paper.

“By then I was frantic. . . . I said, ‘look, I’m a witch and that’s my particular and I want her down now,’ ’’ Cabot recalled, referring to a witch term meaning the cat was necessary for her rituals.

The cat was rescued in short order but she says a newspaper picture of her clutching the cat went viral when news wire services ran it. Officially out of the broom closet, Cabot says she appeared on several national talk shows, including the “Tonight Show’’ with Johnny Carson.

In 1970, she opened The Witch Shoppe at 100 Derby St. and renamed it Crow Haven Corner a year later when she moved to Essex Street - which under different ownership remains the longest-operating witch shop in the city.

Cabot’s third and final location on Pickering Wharf was originally called The Cat, The Crow and The Crown in the mid-1990s before she renamed it The Official Witch Shoppe, a nod to then-governor Michael Dukakis’s 1977 proclamation that dubbed Cabot “Salem’s Official Witch.’’

Cabot, who has taught witchcraft at Salem State College, Wellesley College, and Harvard, still had to educate customers before she could build a clientele.

“Jesus freaks would walk in yelling at me; irate mothers would come in because one of their kids came in the store and was interested,’’ she said. “It was pretty bad; my two daughters and I would be walking down the street and good ol’ boys would drive by and say, ‘They ought to hang you again.’ ’’

She preached that witchcraft, or the Wiccan religion, combines magic, astrology, and environmentalism in a scientific manner. She is fond of saying witches would never curse anyone because, according to their religion, it would be recast at them three-fold. Cabot has written several books, including “The Power of the Witch’’ and “The Witch in Every Woman.’’

Salem businesses eventually embraced the religion when they realized it could line their pockets. While Cabot said the city became a “circus’’ with attractions such as the Boris Karloff Witch Mansion, Salem also became a haven for witches from around the country.

“We were public, we were out there, we weren’t hiding,’’ she said. “So the commercialism served a purpose.’’

With the store closed, Cabot’s dream is to once again attract witches from all over the world to the North Shore by creating a building for her Cabot Kent Hermetic Temple, which received 501(c)(3) nonprofit status in 2010.

“We’re going to get together and buy a building so we’re physically visible,’’ Cabot said. “So we have a temple where witches from all over the world can come and join in with us and light a candle and do a meditation or take classes.’’

Justin A. Rice can be reached at jrice.globe@gmail.com.