In tight local market, no relief for renters, apartment hunters 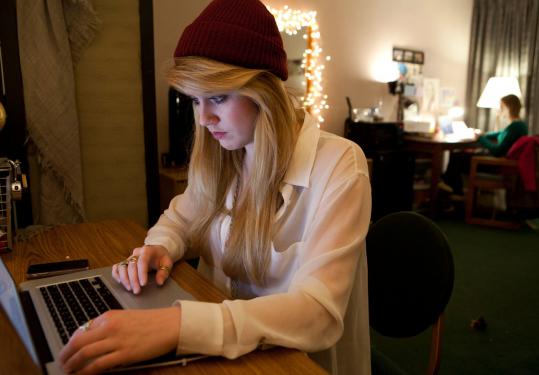 Marie Thompson, 21, and her three roommates are willing to pay up to $3,000 in rent for a Boston apartment. (Kayana Szymczak for the Boston Globe)
By Jenifer B. McKim Globe Staff / January 26, 2012
Text size – +

Rents in the Boston area hit record highs in the last quarter of 2011, pushed up by increased demand and declining inventory, maintaining the region’s reputation as one of the country’s most expensive places to live.

Average monthly rents in the metropolitan Boston area, loosely defined as within Interstate 495, jumped to $1,686 between October and December, compared with $1,649 during the same period the previous year and $1,600 in 2009.

At the same time, the vacancy rate dropped to a nine-year low of 4 percent in the fourth quarter, according to new data from , a New York company that tracks commercial real estate.

Locally, rental prices have been climbing for almost two years, despite a slumbering housing market. Many people have chosen to stay in apartments rather than buy during the downturn, while others have been forced to rent because of unemployment or uncertainty about their job status, housing analysts say. Even with a recent burst in construction of rental housing, economists expect monthly rents to keep increasing for several years.

“It shows there is strength in one side of the Boston housing market,’’ said Eric S. Belsky, managing director of Harvard University’s Joint Center for Housing Studies, of the rising prices. “Boston is a desirable place to live.’’

While the increases can benefit landlords, contractors, and the overall economy, they are causing hardship for those trying to keep up with the cost of living in the Boston area, housing advocates say. More families are struggling to pay their rents and cover other household expenses as federal assistance dollars shrink, while students and young professionals - many on their own for the first time - are finding fewer rental properties to choose from at higher prices.

“My listing volume is a third of what it was two years ago,’’ said Linda Patton, assistant director of off-campus housing at the Massachusetts Institute of Technology in Cambridge. “It’s beginning to scare me.’’

Marie Thompson, 21, a Massachusetts College of Art and Design student, is well aware of the challenge she faces. She and three roommates want to move into a four-bedroom apartment in May or June, and are willing to pay up to $3,000 a month. Even at that price, Thompson said, the selection has been slim. She hopes that will change in coming weeks.

“I would hope to be able to stay in Boston,’’ Thompson said. “There’s much more opportunities and exciting things going on.’’

Rents and housing prices do not always follow the same path, but the current gap - rents way up, home values still down - is dramatic, housing analysts say. In the Boston area, years of rapidly ascending home values peaked in late 2005. By March 2009, they had tumbled about 20 percent, before beginning to bounce along what many perceive to be a pricing bottom. Home values are now about 16 percent less than they were in 2005, according the S&P/Case-Shiller Home Price Indices, which track national real estate data.

Rents climbed less dramatically than home prices, rising through the third quarter of 2008 before being slammed by the country’s financial crisis. Monthly averages topped out at $1,659 that year, and then fell through mid 2010, when they started going up again, according to Reis. Since the state’s housing price peak in late 2005, average monthly rents in the area have risen about 12.5 percent, Reis said.

“Just at the time when people’s incomes are stagnating, rents continue to rise,’’ he said.

Bluestone said it is becoming more expensive to rent because many people lost their homes to foreclosure and others are shying away from buying a house out of fear values will erode even further, or they cannot get approved for a mortgage. Also, he said, the city’s graduate-school population keeps expanding and there are not enough new apartments to keep pace. All of that adds up to more people hunting for apartments.

There are some signs that the shortage could ease. Developers, drawn by the prospect of healthy profits in the rental market, are stepping up apartment construction. In Boston alone, developers broke ground for 1,912 housing units last year, the largest number since 2006, said Sheila Dillon, the city’s housing adviser. Dillon said 418 of the new units are considered affordable.

“We have been hard at work approving new rental projects,’’ Dillon said. “People want to live here. We need to make sure we are building affordable housing.’’

Eric Rosengren, president of the Federal Reserve Bank of Boston, said recently that the federal government should help developers convert large groups of foreclosed homes into rental properties as a way to cut rents and improve blighted neighborhoods.

“There is this oddity, we have rents going up and all these vacant homes,’’ he said during a meeting with Globe reporters and editors.

Meanwhile, many landlords already are signing leases with tenants for Sept. 1, the city’s traditional change-over date, said Ishay Grinberg, president of Rental Beast Inc., a Massachusetts rental service company based in Somerville. Grinberg said that about 25 percent of inventory in the downtown market will be available by the end of February and prospective tenants will get better deals the earlier they sign a lease. More apartments in parts of Brookline, Cambridge, and some Boston suburbs will become available in April and May, he said.

“They either have to start earlier or pay through the nose,’’ Grinberg said of people on the hunt for an apartment or rental house.