Gift from daughter to mother: ‘Ethel’

A private Kennedy’s life is captured in personal documentary film 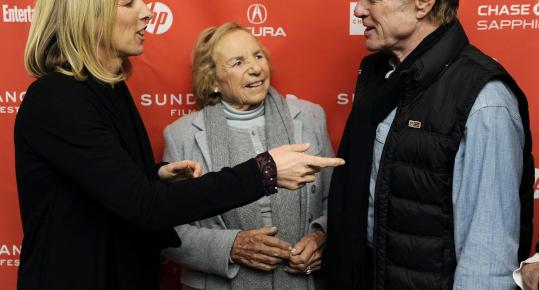 PARK CITY, Utah - Only in the parallel universe known as the Sundance Film Festival can you see Taylor Swift holding hands with Ethel Kennedy.

A small army of Kennedys descended upon this ski town-turned-indie film nexus yesterday for the premiere of “Ethel,’’ documentary filmmaker Rory Kennedy’s love letter to her mother. From Ethel Kennedy herself, diminutive and cheerful at 83, to Bobby Kennedy Jr., his siblings, their spouses, cousins, and grandchildren, the clan turned the packed red carpet outside the MARC theater into a transplanted Hyannisport. Paparazzi cameras flashed hectically, whirred faster when festival founder Robert Redford arrived to chat with the film’s subject, then went into a seizure-inducing blitzkrieg when Swift turned up.

For a few too many members of the media, the pop superstar was the main event, but Swift is a fan of Robert F. Kennedy’s widow and at the moment something of a BFF. The two giggled in each other’s ears as they entered the theater and took seats together with the rest of the Kennedys. When asked how the odd-couple friendship came to be, Swift said her acquaintance with the daughter led to an introduction to the mother. “I had read up on Robert F. Kennedy and his wife, and I asked Rory if it would ever be possible for me to meet her mother. She said, ‘Here’s her number.’ Ethel was kind enough to have lunch and spend a few hours talking with me, and ever since then I’ve been so inspired by how full of life she is and the way she tells her story.’’

“Ethel’’ hopes to introduce that story to all of Swift’s generation and, in a sense, to the rest of us, too. Ethel Kennedy has famously avoided the public spotlight - her last interview was 30 years ago - and has chosen instead to carry on her husband’s good works privately and to see that her children do the same. Those children have closed ranks around her, which made Rory Kennedy dubious when approached by HBO executive Sheila Nevins with the idea of a documentary. (The film will be shown on the cable service later this year.)

“I know my mother, and I know that it’s not entirely within her comfort zone to talk about herself,’’ Rory said, speaking in a telephone interview earlier in the day. “And, honestly, it’s not really in my comfort zone to talk about myself or my family. Part of the reason I make documentaries is to document the world outside of my own experience and try to bring attention to some of the social issues that I think are really important. So it was just uncomfortable.’’

Those documentaries, on subjects as diverse as American poverty (1999’s “American Hollow’’) and the war in Iraq (2007’s “Ghosts of Abu Ghraib’’), have won acclaim and awards, but they haven’t been personal. “Ethel’’ is personal. Put together from hours of home movies and other archival material, as well as interviews with Ethel and her children, the documentary steers clear of hagiography and aims to tell the story of one woman’s life.

Rory Kennedy acknowledges that “Ethel’’ is more than a portrait of her mother. “It’s not covered in the film in an explicit way,’’ she said, “but certainly how my mother navigated the world is indicative of how that generation went through the world. Do I think Eunice [Kennedy Shriver] could have run for office? Absolutely, had she been born 30 years later. Could she have become president? I think there are many women in that generation who were not encouraged to run for office.’’

Mostly, though, the film is a warm and often funny biographical celebration, with a reluctant subject and a host of grown children happy to tell tales.

Most of Ethel’s sons and daughters are interviewed - Joe and Bobby Jr., Kathleen and Kerry and Courtney, Christopher and Max - and they spill the beans about her terrible cooking (Bobby shudders as he recalls something involving Vaseline in a frying pan), bouts of horse theft (she rescued starving steeds from a neighboring farm), and pranking J. Edgar Hoover. Spying a suggestion box at FBI headquarters, Ethel wrote “find a new director’’ on a slip of paper and dropped it in.

“Ethel’’ does no damage to the Kennedy myth, but it does reveal details that are delightfully human. And when the bad times come, a viewer feels them anew: The audience was awash in tears by the final frames. The filmmaker said it was especially hard for her to ask her mother, brothers, and sisters to open up about the assassinations of their father and his brother and about the deaths of two of Ethel’s sons, David in 1984 and Michael in 1997.

“I was covering a lot of subject matters that are very difficult and sad and hard to discuss,’’ Rory said. “And hard to discuss publicly. Yet almost all of them agreed to do it, so I think that says a lot about their support and love of my mother and the project.’’

When asked in the film about her feelings after her husband’s assassination, Ethel Kennedy simply doesn’t speak, and one senses she feels there’s nothing to be gained and much to be lost by taking her emotions public. That she agreed to do the film at all was a surprise to her family, but Ethel said her participation was just an excuse to spend time with her daughter. When asked before the film starts whether she enjoyed opening up for the cameras, she bluntly said, “No, I enjoyed being with Rory. I made it for her, and for the grandchildren, and for future generations.’’