An integral part of MIT life 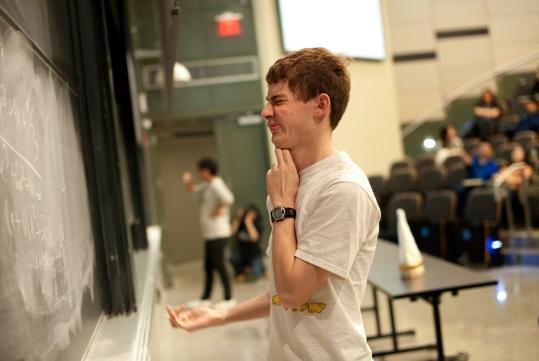 Freshman Ben Kraft worked on an integration problem during the first round of the MIT Integration Bee. Below, the judges had Yi Sun (center) explain his answer. (PHOTOS BY GRETCHEN ERTL FOR THE BOSTON GLOBE)
By Billy Baker Globe Staff / January 20, 2012
Text size – +

It had come down to one final integral.

At the chalkboard on the left, Justin Brereton was rushing through the equation as if a bomb were about to go off. On the right, Praveen Venkataramana was calmly mumbling to himself.

Between them, on a desk in a lecture hall below the Great Dome at the Massachusetts Institute of Technology, sat the wizard’s hat. The first student to solve the problem correctly would get the hat and the grandiose title that comes with it: The Grand Integrator.

At MIT, the annual Integration Bee, which began two decades ago as one of the many quirky diversions during the school’s January independent study period, has grown into something more. At a school without a traditional “Big Man on Campus,’’ becoming Grand Integrator, some say, is the closest thing to it.

“I always joke with my friends that I should have been the captain of the robotics team instead of the football team,’’ said John Wenzel, who is the quarterback, the position at other schools most likely to be awarded the BMOC title. “But at MIT, there is no BMOC because everybody is really special in some way. I might be the quarterback of the football team, but someone else has three patents and another won a national math competition. It’s hard to stand out.’’

But winning the Integration Bee, former winners say, does make you stand out.

“It definitely gives bragging rights,’’ said Sriram Krishnan, who won the Integration Bee four times as a grad student. “But geek pride is something you exercise with caution. It’s not necessarily a pickup line I would use.’’

On Tuesday night, as the 16 finalists in this year’s bee took their place in the front row of the lecture hall, the audience of about 100 got rowdy in what has become a signature part of the competition. Some held signs cheering for their classmates; others held signs featuring spherical coordinates; all jeered at stupid mistakes and shook their heads at the pure skill of the competitors.

Integrals, one of the core constructions in modern mathematics, are not important math, as they like to say at MIT, but they can be very tricky. Solving them head to head, very fast, on stage in front of a hooting and hollering audience of peers - many of whom are racing to the solution on scrap paper - is visibly stressful. Many of the competitors were a jittery mess when they stepped to the blackboard.

“It’s a different type of math because it’s about competition and speed,’’ said Abhinav Kumar, a former Grand Integrator who now runs the competition. “It’s like if you win a spelling bee; that doesn’t necessarily mean you’re going to be a great writer.’’

But Kumar said there is a proven parallel between success in the bee and success in the more highly regarded areas of mathematics. He himself went on to become a professor in the school’s famed math department.

“Just watching the way some of them solve the problems is incredible,’’ he said. “You can see that these are minds that understand high-level math. And one guy kept solving them in his head, which just blew my mind.’’

For the final round, Kumar had chosen some painful integrals.

Brereton, a junior math major who was the most colorful competitor throughout the session, faced off against Venkataramana, a quiet freshman in a class of ’15 sweatshirt. As they raced through the problems, Brereton narrated his stress to the audience - “Oh, there’s a seven here,’’ he gasped to laughter - paced around, dove to his knees, rushed for the eraser, put his hands on his head, and generally freaked out.

Venkataramana, on the other hand, was so intensely focused that he seemed to tune out the audience, even when they were yelling at him to stop while the judges checked Brereton’s answers.

The two traded wins as the round continued, until the best-of-five became locked at two and entered the final integral.

The problem went up on an overhead projector, and both men started racing. Brereton was particularly frantic, and it was clear he knew how to get to the answer if only his hands could get through the proof fast enough. Finally, after dashing back and forth for two minutes and nearly filling a blackboard with numbers and symbols, he circled his answer, stepped back for a nervous second to double-check it, and yelled: “Stop!’’

“That answer is correct,’’ Kumar announced.

As the excitement settled and Brereton had a chance to compose himself, he was asked the question: Does this make him the BMOC?

At MIT, though, it is a very particular tidbit; “impressive, but a funny kind of impressive,’’ said Ashley Villar, a sophomore who watched the competition and solved along on scrap paper.

“It’s not like you’ve published great research,’’ she said. “But at MIT, you’re probably still better known than the quarterback.’’