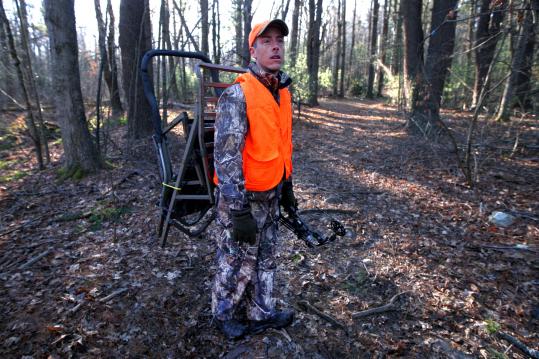 DOVER - Beth Webb knew there was more to her boy’s stiff neck and fever than met the eye, but only when his temperature jumped to 107 degrees and he wound up in a hospital emergency room did she spot the telltale red bull’s-eye of a tick bite on his chest.

Then more appeared. “As we were sitting there, bull’s-eyes were just popping up all over his body,’’ Webb said.

Her son, Ashton, 7, went home from Newton-Wellesley Hospital with antibiotics and appears to have fully recovered, but the Dover family’s battle with deer ticks - and the Lyme disease they carry - remains in full swing.

Guinea hens, which eat ticks, patrol their yard. Tick checks have become part of the routine at soccer fields and playgrounds. And the Webbs are on the front line of a growing effort to curb the spread of Lyme disease through deer hunting.

Not only does their yard back up against the Noanet Woodlands, a reservation once closed to all hunting but now included in Dover’s bow-hunting program, but the Webbs have allowed two hunters to set up tree stands on their property.

“I have never been for hunting before. Not ever. But it has to be done,’’ Webb said.

Now she serves on the town’s Lyme Disease Committee, which is considering asking the state’s Division of Fisheries and Wildlife to expand hunting in Massachusetts, even as the accidental shooting of a woman by a hunter in Norton rekindles the debate over its place in such a heavily populated state.

Cheryl Blair, 66, was walking her dogs in the woods near her Norton home on New Year’s Eve when she was shot by a neighbor hunting with a .50-caliber black-powder rifle on the last day of the hunting season. John Bergeron, an off-duty state trooper and licensed hunter, has said he mistook Blair’s dog for a deer. Blair remained hospitalized this week, and was expected to undergo surgery Monday at Rhode Island Hospital for a lingering infection, according to her husband.

While the state’s Environmental Police continues its investigation, officials at MassWildlife said the case will be examined like all other hunting accidents for possible revisions to the hunting regulations.

Standards for hunting differ by community. In Needham, the town considered a ban on bow hunting after a resident reported that her daughter encountered a hunter in tree platform near their backyard in November.

Meanwhile, Dover and nearby communities are stepping up efforts to cull deer populations in order to reduce the incidence of Lyme disease and other problems associated with too many deer in too small an area, including degradation of habitat and car-deer collisions.

Statewide, MassWildlife estimates the deer population to be between 85,000 and 95,000, with herd densities at acceptable levels in most areas west of Interstate 495. East of the highway, however, suburban sprawl has led to decreased access to areas open to hunting, and deer populations have reached unhealthy levels, said Tom O’Shea, MassWildlife’s assistant director of wildlife management.

State biologists estimate Dover and surrounding towns have 25 to 30 deer per square mile, while the goal for this part of Massachusetts is closer to eight per square mile, O’Shea said. “Every time there is access opened to hunting, you are going to improve your ability to control deer numbers,’’ he said.

To that end, Dover opened town lands previously closed to hunting to a carefully screened corps of archers to help reduce the deer herd in 2010. In the program’s first year, 32 hunters culled 19 deer.

The program was expanded for last fall to include more conservation and town lands. However, the 58 hunters managed to kill just 16 deer due to unusually mild and wet summer and fall that not only brought out more ticks but caused oak trees to drop far fewer acorns.

“This is the craziest year we have seen,’’ said Barbara Roth-Schechter, the chairwoman of Dover’s Board of Health. “With almost no acorns, there is nothing to eat in the woods, so deer come out of the woods to feed near homes and are eating grass in open fields.’’

That proximity to homes and roads meant many of Dover’s hunters could see deer but could not take them, with state law forbidding hunters to fire weapons within 500 feet of occupied homes and 150 feet of roadways.

Other communities that have enacted Lyme-targeted deer hunts include Andover, Duxbury, Framingham, and Sudbury, O’Shea said.

Yet critics say expanding the hunting of deer to thwart Lyme is misguided.

“The idea that deer hunting works is based on outdated data. The primary host of Lyme is mice, but it is also carried by every species of mammal except bats, plus 49 species of birds,” said Steve Rayshick, cofounder of the 3,500-member Massachusetts Animal Rights Coalition. “Killing off deer can just make the ticks look for something else to feed on – dogs or people just walking by.”

Dr. Allen Rutberg, assistant director of the Center for Animals and Public Policy at Tufts University’s Cummings School of Veterinary Medicine in Grafton, said towns are putting too much stock in hunting as a way to curb Lyme disease.

“I think these deer management programs have been oversold. Their effectiveness at curbing Lyme disease have not been demonstrated,” Rutberg said.

Jose Martinez can be reached at martinezjose1@mac.com.