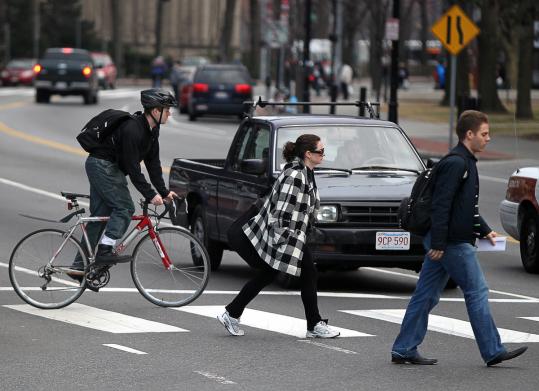 Police have targeted the intersection of Vassar Street and Massachusetts Avenue in Cambridge as part of a roadway safety campaign since a fatal bicycle-truck collision there last month. (Jonathan Wiggs/Globe Staff)
By Meghan E. Irons Globe Staff / January 9, 2012
Text size – +

When the coast was clear - no cars or trucks turning from Massachusetts Avenue - she rode across the street using the crosswalk, which is designated for pedestrians.

“This intersection makes me nervous,’’ said Pearson, a Somerville resident who bikes regularly to work in Boston. “I like to cross the way pedestrians do. I don’t feel safe in this spot right here.’’

With good reason. Thousands of bicyclists, pedestrians, and motorists converge each day at the intersection near the Massachusetts Institute of Technology campus, where crowds of students on Vassar Street meet traffic on Massachusetts Avenue. Police say it’s a hazard.

“For the amount of volume that goes through that intersection . . . I would say it is one of our highest accident locations in the city,’’ said Police Deputy Superintendent Jack Albert.

Since 2007, Cambridge police responded to 55 accidents at the intersection, 24 of them involving cars and bikes, according to police reports. Many resulted in minor injuries, the records show, but last month one was fatal. MIT graduate Phyo N. Kyaw of Cambridge was riding a bicycle when he collided with a truck.

Police have targeted the intersection as part of a roadway safety campaign aiming to improve bicycle safety across the city by educating riders and cracking down on those who violate traffic laws.

At the crash site Friday, black cable secured a white bicycle on a signpost. Flowers, candles, and sheet music were placed around the wheels of the bike that bore a message to Kyaw, a 23-year-old native of Myanmar: “You are dearly missed.’’

Albert said Kyaw was wearing a helmet. But neither the police nor the Middlesex district attorney’s office released details about how the accident occurred, citing an ongoing investigation

Albert said accidents are bound to happen with so many people using the intersection.

Efforts have been made to improve it.

While road design enhancements were being made on Massachusetts Avenue last year, MIT urged the city to adjust the timing of traffic signals to be more pedestrian friendly.

Pete Stidman, who heads Boston Cyclists Union, urged improved traffic design and better awareness of cyclists and drivers who use the road.

“Twenty-four out of 55 would be a pretty high percentage,’’ said Stidman, referring to the number of accidents involving bicycles at the intersection. “That is definitely a cause for concern.’’

According to the police accident reports, blame was not confined to a single group. Motorists ran red lights, cyclists followed vehicles too closely, and many ignored traffic signals. Of the 55 accidents since 2007, 26 involved vehicle-only accidents and three involved pedestrians, the reports show.

Most of the accidents involved drivers making right turns colliding with bicyclists because they did not see them.

On Dec. 12, a bicyclist riding on Mass. Ave. through the intersection told police a dark red sedan on Vassar Street went through the red light, striking him in the middle of the road. He landed on the hood of the car, then fell off when the driver sped up, the report said.

On July 18, a bicyclist following closely behind a van on Massachusetts Avenue collided with another car attempting to make a turn onto Vassar. The drivers of the car and van did not see the cyclists, the police report said.

On April 17, 2007, a driver told police that she was heading south on Massachusetts Avenue when she felt as if she may have had a flat tire. She lost control and rammed into the front of another car.

On Friday, commuters hurried to their destinations, and many said that despite its high volume of users, the intersection is relatively safe - a sentiment shared by police.

“I use the lights,’’ said Dennis Nangle, an MIT instructor, who was riding to work on a scooter. “If you are riding a scooter, bike, or motorcycle, you tend to be aware of what is happening.

But there were plenty of near misses at the intersection Friday morning. A bicyclist was seen slipping through traffic just as two trucks were making turns. A car blew through a red light. And a garbage truck barreled through the intersection, ignoring a pedestrian using the crosswalk.

Most bicyclists wore helmets, but during a 15-minute span a dozen cyclists seen navigating the roads had only winter hats or earmuffs protecting their heads.