On the long road to healing 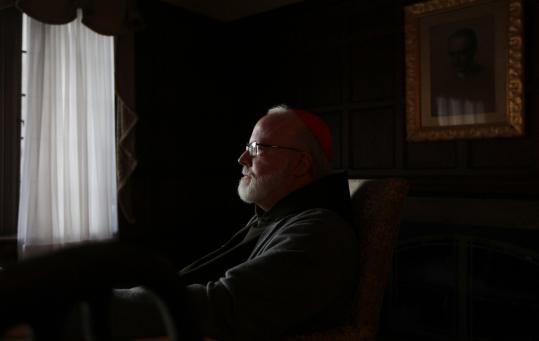 Of his efforts to help victims, Cardinal Sean O’Malley said: “Hopefully there will be some healing that comes out of it.’’ (Bill Greene/Globe Staff)
By Mark Arsenault Globe Staff / January 3, 2012
Text size – +

A decade after revelations of clergy sex abuse rocked the Archdiocese of Boston, survivors still come to Cardinal Sean O’Malley in search of healing.

Not a month passes, O’Malley said, without a victim asking for an appointment. Nearly nine years into his tenure as archbishop of Boston, the cardinal still ministers to victims, still encourages them to return to the church that so profoundly let them down.

He sees his pastoral duty to sex abuse survivors as this: “First of all, to let them know how sad we are that this ever happened,’’ he said. “And a recognition that, you know, apologies won’t make the hurt go away.’’

In a lengthy interview marking the 10-year anniversary of revelations about the archdiocese’s role in protecting abusive priests, which sparked a worldwide Catholic upheaval, O’Malley could not say when the church would achieve redemption and forgiveness.

The sex abuse scandal, he said, has changed the church for all time.

“Obviously, the revelations that took place 10 years ago caused great pain and upset in the whole community, and people were angry, disappointed, shocked, saddened,’’ said O’Malley, speaking deliberately in a dimly lighted dining room at the rectory of Cathedral of the Holy Cross in the South End.

“However, out of that pain came the will to make our church institutions and schools and parishes the safest place possible for children, to mobilize the Catholic community so this would not happen again, and to try to bring some healing to the individuals and the families that were most affected by this terrible scandal,’’ he said.

“It’s something that permanently marks the way that we do things going forward.’’

But as much as the church wants to go forward, the past will not let go.

At Advent season every year, O’Malley celebrates a Mass for survivors of clergy sex abuse. The most recent, last month at the Pastoral Center in Braintree, attracted about 50 people. Two survivors who attended told O’Malley it was the first time they had been to church in 20 years, he said.

“I felt consoled they were making that step to have some contact with the church and hopefully there will be some healing that comes out of it, and greater peace in their lives,’’ said O’Malley, in the careful, measured tones for which he is known.

The cardinal, who has been described as remote, had little to say about how the crisis affected him personally. He was, he said, “saddened . . . disappointed.’’ He said he does not feel rage at the perpetrators, nor has he despaired while he has tried to heal the damage they caused.

O’Malley’s record in Boston is one of change. He sold the archdiocese’s campus in Brighton and used the money to settle sex abuse claims, at a cost of about $100 million. He spent millions more on therapy and medication for victims, installed child-protection training programs, and oversaw some 250,000 criminal background checks for clergy, teachers, and church volunteers.

For a Capuchin who had dreamed as a child of becoming a priest, this was not the ministry he had in mind. The cardinal, who shies away from attention, has compared his job to “living in a fishbowl made of magnifying glass.’’

He jokes about the moment he learned that Pope John Paul II wanted him to take on the problems in Boston.

“It’s like Kennedy’s death,’’ he said, with dark humor. “You don’t forget where you were.’’

It was late June 2003, and O’Malley, then bishop of Palm Beach, Fla., dined with family at an Italian restaurant to celebrate his 59th birthday, he said. His cellphone rang. Probably a cousin, he thought, calling with birthday wishes. “So I went outside to answer the phone, and it was the nuncio telling me that the Holy Father wanted me to go to Boston.’’ He said he dropped the phone.

“My first thought was, why didn’t I get caller ID?’’ said O’Malley, with a laugh. There is some truth in the joke - he did not want to come to Boston. He had been in Palm Beach less than a year and he thought the Boston job too big for one man.

He asked the pope, through the nuncio, to reconsider. The answer came quickly: Get to Boston as soon as possible. About a day later, the news broke that O’Malley, who had led the Fall River Diocese through a sex abuse scandal in the 1990s, would bear such a burden again, as the next archbishop of Boston.

The series of events that led to that moment began on Jan. 6, 2002, when the Globe published an article disclosing through court records how Cardinal Bernard F. Law had repeatedly transferred the Rev. John J. Geoghan from parish to parish as reports of sexual abuse arose. The article, followed by others, revealed the full extent of the sexual abuse problem within the archdiocese, triggered a series of other revelations across the country, and ultimately led to Law’s resignation as head of the archdiocese.

Law is not the only bishop accused of protecting the institution at the expense of children, but he became a symbol of the Catholic Church’s administrative failure to address pedophile priests.

“I think there was a lot of ignorance,’’ said O’Malley, in an attempt to address how those who should have been watchdogs for child safety could fail so terribly. Bishops, he said, focused on the perpetrators, and “what can you do to cure him?’’ Abusers were quietly sent to treatment.

“Now we know, particularly if it’s a question of pedophilia, there’s no good prognosis for a cure. And now people are much more aware of the damage that is done to the children.’’

One positive outcome of the church scandal is “a much greater awareness, and people more engaged, with trying to deal with the problem’’ of child sex abuse, O’Malley offered. “A great deal of the awareness is due to all the notoriety that has been given to the crisis in the Catholic Church.’’

In 2004, Law was appointed archpriest of the Basilica of St. Mary Major in Rome, a prestigious assignment that enraged sex abuse victims. Law retired in November. O’Malley said he speaks to Law “occasionally - when I’m in Rome.’’

“He’s, ah - I think he’s a strong man,’’ said O’Malley, speaking hesitantly of Law. “He has a strong faith. This has not been easy for him. And he knows the anger and the upset of people.’’

Law does not give him any advice, said O’Malley, adding that he listens to his advisers, and to God, for help in his job.

When he addresses the sex abuse scandal in prayer, “I pray for mercy for all of the people involved,’’ O’Malley said, “and I pray that people will realize how much they are loved by God.

“That’s where we find our strength.’’