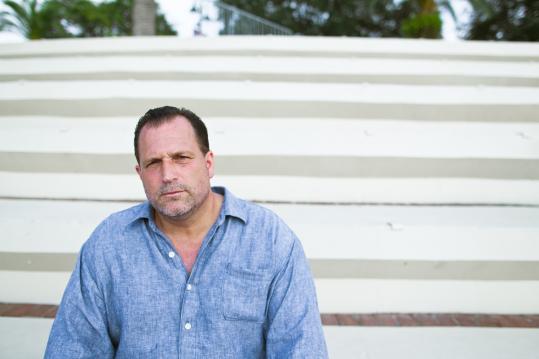 James “Whitey’’ Bulger allegedly killed Billy St. Croix’s sister, slowly choking the life out of a young woman who had saved Billy from drowning when he was a boy.

But when Bulger, one of the FBI’s 10 Most Wanted fugitives, was finally captured in Santa Monica, Calif., last June after more than 16 years on the run, St. Croix felt no sense of joy or justice. Unlike other family members of Bulger’s 19 alleged victims, St. Croix did not show up at the federal courthouse to get a look at the notorious gangster.

The reason: He knew that Bulger’s return to Boston would take his family back to a place of enormous loss - and shame.

St. Croix’s father is Stephen “The Rifleman’’ Flemmi, Bulger’s longtime partner in crime and fellow FBI informant. Flemmi confessed that he watched in 1985 as Bulger allegedly strangled Deborah Hussey, who was St. Croix’s sister. Hussey was the daughter from a previous relationship of Flemmi’s longtime girlfriend.

St. Croix also blames his father for the drug-related death of his other sister and the imprisonment of his brother.

St. Croix and his family have remained steadfastly silent about their suffering over the past decade, knowing that some blame them for their own misery. Justice Department lawyers argued in court that Deborah Hussey was murdered, in part, because she was “fraternizing with known criminals.’’ The judge sanctioned the lawyers for blaming the victim and her family.

Now, as Bulger, 82, prepares to stand trial, St. Croix is speaking out for the first time, expressing sympathy for Bulger’s girlfriend, Catherine Greig, and reminding people that Deborah Hussey was a victim, too, and his family was also shattered by the two gangsters who had a corrupt relationship with the FBI.

“I’m so upset and angry that they’ve made Debbie like her life didn’t matter,’’ St. Croix said during a series of interviews with the Globe. “She was a victim of sexual abuse from a young age. . . . They just glossed over it and they vilified her and my mother. Not just the government - the media as well.’’

St. Croix said Greig, who had been on the run with Bulger since 1995 and is charged with conspiracy to harbor a fugitive, reminded him of his mother, Marion Hussey. Other victims’ families have denounced Greig for enabling Bulger to live in comfortable retirement while evading capture, but St. Croix said Greig may have been dominated by the gangster he calls “Jimmy.’’

St. Croix, who initially followed his father into organized crime, cooperated with authorities after his father confessed to him in early 2000 that he and Bulger killed his 26-year-old sister.

St. Croix, a cancer survivor and father of six, became a government witness, but he declined an offer to join the Witness Protection Program. He now lives in another state and asked that his residence not be disclosed.

St. Croix has no love for Bulger - “He was very condescending. He was a misogynist’’ - but he reserves most of his venom for his 77-year-old father, now serving a life sentence for 10 murders.

“He’s a sociopath,’’ said St. Croix. “To be able to kill my sister and then go home and have relations with my mother, able to put his arms around my mother knowing how he killed my sister, I would say that’s a classic sociopath. Or maybe not even classic. Maybe it’s something new.’’

St. Croix, now working on a book about his life with “Seven’’ author Anthony Bruno, said his mother, who lives in the Boston area, urged him not to go public, but he needed to tell the story of how his father destroyed his own family, along with so many others.

“It’s about righting a wrong,’’ he said.

Deborah Hussey was a baby when her 19-year-old mother, Marion, split from her biological father and began dating 25-year-old Flemmi, a former Army paratrooper who was already involved in bookmaking and loansharking.

Flemmi, who was separated from his wife, moved in with Hussey and her toddler. The couple lived in Dorchester and Milton for several decades and had three children together, Billy, Stephanie, and Stephen. The gangster insisted they take the name of their mother’s ex-husband. Billy Hussey changed his name after graduating from high school, taking his maternal grandmother’s maiden name, St. Croix.

He said his father was very controlling of his mother, who was isolated at home while he had relationships with other women. He said his mother told him only recently that Flemmi used to beat her.

“She loved him, she hated him, and she feared him,’’ St. Croix said. “She wanted to get away from him for years.’’

Marion Hussey struggled to support the family on her own for five years after Flemmi was indicted on attempted murder charges in 1969 and fled to Montreal. She waitressed, sold home goods, and groomed dogs, while Deborah helped care for her younger brothers and sister.

“She had a lot of responsibility,’’ said St. Croix, recalling Deborah as kindhearted, often bringing him boxes of baseball cards.

In the summer of 1970, 12-year-old Deborah Hussey saved 9-year-old St. Croix’s life when he got caught in a riptide and was swept away from the beach during a family vacation on Long Island in New York. Flemmi, still a fugitive, was staying at a beachfront hotel in Montauk with his family. He was on the beach when he saw his son struggling, but was too far away to help.

His sister came to his rescue.

“Debbie was under the water, holding me up,’’ said St. Croix, recalling how she kept him afloat until his father got to him. “This girl saved my life.’’

Flemmi eventually returned to Marion Hussey after the murder charges were dropped, ushering in a time of prosperity for the family. They lived in a sprawling home in Milton with a swimming pool and tennis courts, but St. Croix said it was not a happy household. His father mistreated his mother and they fought constantly.

On Sundays, St. Croix said, his family gathered at his paternal grandmother’s house, where Jimmy Bulger - no one called him “Whitey’’ to his face - and other gangsters dropped in with their girlfriends for home-cooked Italian meals.

“He was always a big presence when I was younger,’’ said St. Croix, recalling that Bulger was always impeccably dressed and wore a lot of gold jewelry.

“People looked forward to him coming in,’’ St. Croix said. “Jimmy would shower us with gifts, $20 bills. He was warm at first and friendly. As I got older I started to see him in a different light.’’

St. Croix said he grew up with the delusion that there was something honorable about gangsters and thought that if his father and Bulger were involved in murder it was “bad guys killing bad guys.’’

St. Croix said Flemmi was loving toward his sons, sending both boys to private Thayer Academy in Braintree, but his sisters went to public Milton High School. St. Croix said that years later he learned that both his sisters had been sexually abused by Flemmi as teenagers. Their lives spiraled downward and both became addicted to drugs.

Deborah Hussey dropped out of Quincy College and waitressed in Boston’s old Combat Zone, engaging in prostitution and robbing bookmakers, according to court testimony.

Hussey eventually told her mother that Flemmi had sexually abused her, prompting Marion Hussey to throw the gangster out of the house with no explanation to the children.

“She was a broken woman’’ after that, said St. Croix.

Shortly afterward, around January 1985, Deborah Hussey vanished. Her mother suspected Flemmi had something to do with it and hired a private investigator to try to find her, but Flemmi insisted she had probably run off to California, St. Croix said.

Flemmi’s youngest son, Stephen Hussey, was the next family member to meet disaster at his father’s hands, St. Croix said. In 1997, he was sentenced to 18 months in prison for filing a false affidavit concerning Flemmi’s assets in an effort to help him get bail.

“I could never forgive my father for letting my brother go to prison,’’ said St. Croix, describing his brother as a legitimate businessman who was duped by his father.

St. Croix said he was the one who followed his father’s footsteps and spent a decade committing crimes, including drug ripoffs, arson, and burglary. But, St. Croix said he quit that life in 1997 as “my loss of integrity bothered me.’’ He said he was stunned when it was revealed in court that year that his father was a longtime FBI informant.

In October 1999, St. Croix’s younger sister, Stephanie, a 38-year-old heroin addict, died on his birthday. The official cause was liver disease, but St. Croix said he believes it was suicide because she left a note accusing their father of molesting her when she was a teenager. Flemmi denied it.

That winter, police discovered Deborah Hussey’s remains in a Dorchester grave, along with two other victims. When St. Croix confronted his father at the Plymouth county jail, where Flemmi was being held while awaiting trial for racketeering, the gangster confessed.

Enraged, St. Croix led investigators to an arsenal of weapons belonging to his father and Bulger. He cooperated against his father and testified at the federal trial of his uncle, former Boston Police officer Michael Flemmi.

Later, Stephen Flemmi testified that he was angry at Hussey for telling her mother about the sexual abuse. He said he lured her to a South Boston home, then watched Bulger strangle her. A former Bulger associate said Flemmi twisted a rope around Hussey’s neck afterward to make sure she was dead.

St. Croix blames his father for instigating the slaying and destroying his own family, along with so many others. But, he said, the FBI is to blame for protecting his father and Bulger from prosecution for years, while they got away with murder.

Last year, a federal judge agreed, ruling the government was liable for Hussey’s death because of the FBI’s corrupt relationship with Bulger and Flemmi. He awarded $219,795 to Marion Hussey, then ordered the government to pay her an additional $5,000 for deliberately humiliating and embarrassing the family at trial. A federal appeals court is weighing the government’s appeal.

Justice Department lawyers argued that Marion Hussey should have known Flemmi was dangerous, yet stayed with him as he supported her through his life of crime.

“I think the biggest thing I want people to know is my mother is not that stereotype nor are my sisters,’’ St. Croix said. “My mother has so much hurt and sense of loss of what these families went through. It destroys her.’’

He said his mother felt a sad kinship with the mother of 26-year-old Debra Davis, a longtime girlfriend of Flemmi who was also allegedly strangled to death by Bulger as Flemmi watched. Flemmi testified that they killed Davis in 1981 because she was leaving him for another man and knew the two gangsters were FBI informants.

St. Croix said he knows that his father, who agreed to cooperate with the government to avoid the death penalty, will be called to testify if Bulger stands trial.

But St. Croix said that his family doesn’t plan to attend the trial and his mother just wants to be left alone. “I don’t need to hear all the details,’’ St. Croix said. “I’m kind of like my mother. I want it to go away.’’

St. Croix said he hopes Bulger spends the rest of his life in prison, but thinks Catherine Greig should be released on bail while awaiting trial.

“I would say anybody that could tolerate and live under the auspices of James Bulger deserves to be free,’’ said St. Croix. “I can’t even imagine what kind of life she had with him.’’

Shelley Murphy can be reached at shmurphy@globe.com.