Flooded in letters from needy, Postal Santa tries to deliver 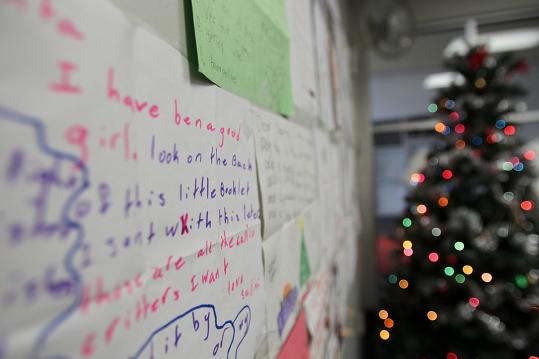 Some of the 1,200 children’s letters to Santa Claus are posted on the Boston office walls of the US Postal Service as part of Operation Santa. (SUZANNE KREITER/GLOBE STAFF)
By Billy Baker Globe Staff / December 20, 2011
Text size – +

On the walls are the letters from the children.

Some try flattering Santa. “You are so rockin’ awesome,’’ one wrote.

Some try sympathizing with him. “I know that you are very busy getting ready for Christmas,’’ another scrawled, “so I will be brief.’’

And some try the honest approach and come clean.

“I’m sorry,’’ one wrote poetically and phonetically, “that I didn’t be as good as I sopost to.’’

But they are not the only letters to Santa in this back room at the Boston headquarters of the US Postal Service. On a desk are manila folders filled with stacks of letters from the parents of those children. And they are even more brutally honest. They are asking for help.

“Every year I usually manage to save money to not kill the Christmas spirit,’’ one mother wrote. This Christmas, she just could not do it.

Operation Santa is a project of the US Postal Service to connect families in need with families who want to help. The parents draw up a modest list of things the children would like for Christmas, and then an anonymous donor chooses one of the letters and fulfills the requests.

This year, the Boston office received 1,200 letters from parents in need, and Charlie Lynch, the district manager, said the office is on track to respond to slightly more than half of them. Many of the letters were taken on by postal workers, and another 150 were adopted by the Norwell company Clean Harbors, but organizers are scrambling to fill as many requests as they can by the end of the week. The deadline to choose a letter is 3 p.m. today.

“You cannot read one without getting involved,’’ Lynch said as he gestured to the hundreds of unclaimed letters, which are grouped in folders by the size of the family, with “5+’’ on the far end. “They’ll rip your heart out. And they ask for modest things like clothes and shoes, maybe some toys.’’

Most of the letters begin with an explanation, a reason why they need to ask for the help of a stranger to rescue Christmas for their children. Over and over, the same themes pop up: “unemployed;’’ “single parent;’’ “disabled;’’ “sick;’’ “the economy.’’

Many write that they are embarrassed to ask. Others say they are desperate and will take anything.

Andrew Duran, a postal employee who has been working with the people who drop in to choose a letter, said it is hard not to be touched by the struggle contained in each one.

“I have some people spend over an hour looking through the letters,’’ Duran said. “Some take them, sit down at the table, and cry.’’

Many people involve their children, Duran said, and use the process as a teachable moment, and a reminder to be thankful for what they have.

Doug Mavilia, a financial planner who lives in Weymouth, walked into the post office yesterday morning carrying a bag of wrapped gifts for the family whose list he chose. The hardest part, he said, had been choosing just one letter.

“They’re all so sad,’’ he said. “You wish you could help every single one. It’s hard to leave the others behind.’’

Ultimately, Mavilia and his wife, who have a 1-year-old child, chose a single mother with three children, and spent the weekend filling their wish list.

“We were so excited to do it, and it was fun wrapping the gifts, hoping that this will make things a little better for the family this Christmas,’’ he said.

Writing to a stranger for help is a leap of faith. But as the children wrote over and over again in their letters to Santa, you have to believe.

Billy Baker can be reached at billybaker@globe.com