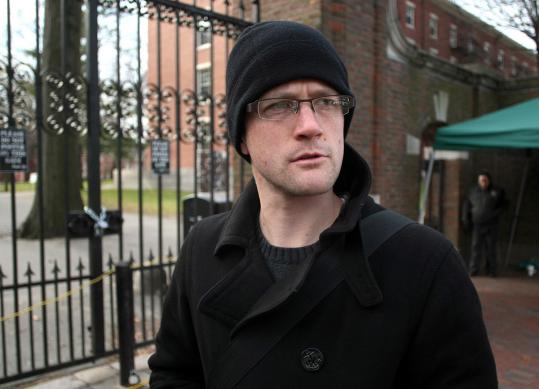 CAMBRIDGE - Setting aside his dissertation on the environmental aspects of the Great Migration, Brian McCammack of Occupy Harvard considered tomorrow when the dozen or so tents will be taken down.

The occupiers are calling it a transition rather than an abandonment and are vowing to continue the movement in other ways. They will leave in place the tarpaulin-covered geodesic dome that has been their common area and may attempt to maintain it 24 hours a day, hoping to stoke newdebate and discussion.

“Everybody’s excited to think about how to transition our energies to raising these issues in new and different ways, to keep it fresh and keep people interested,’’ said McCammack, a doctoral student in American Civilization, adding that the encampment was in danger of blending into the landscape after 39 days there.

“We became, oddly enough, the status quo,’’ he said. “At a certain point if people weren’t curious about it they didn’t come by anymore.’’

Harvard administrators plan to meet tomorrow with protesters and some community members, apparently to discuss ending the university’s unprecedented six-week lockout of Harvard Yard to the general public.

University spokesman John Longbrake would not comment on the meeting but instead reiterated an earlier statement that Harvard has “no interest in limiting access to the Yard for a day longer than necessary to ensure the security of the members of our community.’’

The modest activity lately around the tents- visible in the distance from the padlocked gates and scattered ID checkpoints - belies both the 24-hour security apparatus that has sprung up around them and the accomplishments claimed by Occupy Harvard. Those include helping to lobby successfully for a more generous contract for Harvard custodians, staging a heavily attended teach-in, and prompting the university to at least consider whether to continue with a controversial endowment investment.

But for many the chief trapping of the movement is the lockdown of the 25 most iconic academic acres in the nation, posing a minor annoyance to those with Harvard IDs and a greater inconvenience to the stream of tourists and residents who for generations have explored the yard or used it as a cut-through.

“I don’t have too strong an opinion about the movement itself. It is kind of difficult with the gates being closed to get around, especially at night,’’ said Alex Steinroeder, a freshman who lives in the yard. He had checked out the encampment and collected some literature but was surprised by its sparse population. “I feel like if they’re going to occupy it, at least actually be there.’’

A handful of occupiers sleep in some of the camping tents every night, and they also keep an information tent continually staffed, but the network of students and employees comprising the movement float in and out around classes, work, and exams.

They have been frustrated by what they consider the university’s paternalistic response, encouraging free speech but limiting their contact with outsiders in the name of safety - and have tried to redirect lockdown-related resentment that has come their way.

“To have the gates shut is a shutting down of the university, and that saddens me as somebody who just deeply cares about education and about the wealth and treasure of this particular academic community,’’ said Hannah Hofheinz, a Harvard Divinity School doctoral student. “That’s one of the things that we’re really excited about for Occupy Harvard 2.0 . . . Occupies are first for communal and civic engagement. Everyone is invited. Period. Full stop.’’

Many undergraduates seem fatigued by the occupation, even if they might sympathize with its ideals. A survey of 1,035 students conducted for a statistics class and reported by the Harvard Crimson asked people to rate their impression of Occupy Harvard from 0 to 10, with 0 the most negative and 10 the most positive; the average was 2.84.

“Their tactics, I really feel like, have ended up undermining their message to a lot of people,’’ said Avishai Don, a senior who wrote a recent Crimson op-ed article calling on the movement to take more responsibility for prompting the gate closure.

Occupy members emerged for interviews yesterday outside Thayer Gate, the yard’s primary northern access, between incoming and outgoing security tents pitched at two small doors. Nearby, a guard shivered beneath a heavy parka, a scarf knotted around his head like a babushka. The normally open gate was padlocked with a chain and lock big enough to be movie props.

In twos and threes, disappointed tourists stopped to take pictures and consult maps. “It just seems to be an overreaction to what is a student expression of opinion,’’ said Guthrie Castle, a father from Memphis on a suddenly circumscribed self-guided college tour with his two daughters.

Around the corner at Johnston Gate, a group of au pairs visiting Boston for the weekend struggled to understand why the security guard would not let them through without an ID.

“We are surprised,’’ said Nataly Romero of Colombia, who has been working for a family in Maryland. “We want to see what is there.’’

Longtime Cambridge tour guide Vincent Dixon said the closure has been terrible for his business. Dixon, a multi-degree alumnus of Harvard’s extension and education schools, said he no longer cares who is right in the standoff - he just wants the yard open.

“At this point both sides are basically denying us as a community,’’ said Dixon, owner of the history-laced Cambridge Advantage Tours.

“Both sides I think are so invested in their egos,’’ Dixon added. “As a Harvard graduate I would prefer that these people take what is basically a dispute between a few Harvard people on one side and a university that really does run and have a major role in the American economy’’ and resolve it.

That dispute over the yard may be easier to resolve than the larger issues raised by the occupiers, who say they mostly love Harvard but want it to operate with more of a conscience.

“I am grateful for what the school has given me,’’ said Katherine Stevens, an American Civilization doctoral student studying the spread of slavery in the deep South. “But the lack of transparency about where all that lovely money comes from is something I do not feel comfortable with.’’