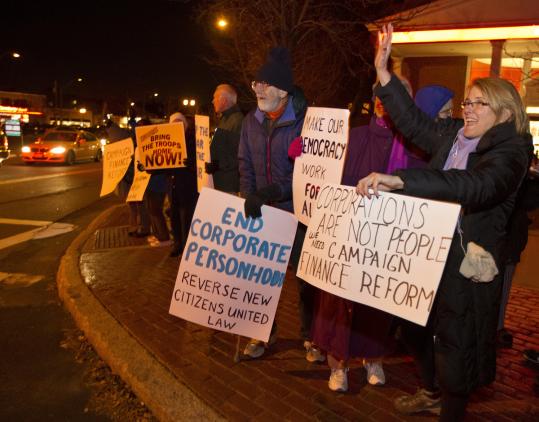 When the tents finally came down, the 9-foot statue of Mahatma Gandhi that had watched over Occupy Boston protesters went back to its quiet home at the Peace Abbey in Sherborn.

But only for a quick touch-up.

Like the suburban Occupy movement itself - known more for kitchen meetings and rush-hour sign-holding than standoffs with police - Gandhi isn’t finished.

The Peace Abbey’s general assembly voted Saturday to approach Boston city officials in hopes of donating a newly commissioned Gandhi statue, or a plaque, to commemorate the 10-week occupation site in Dewey Square.

“The goal is to have as many tents in front yards as the number of tents that have come down’’ in Dewey Square, Randa said. “A reminder of this important movement.’’

Suburban activists stress, though, that Occupy’s message goes beyond camping out. Organizers in Needham, Natick, Newton, and Lexington say the eviction of Boston’s protesters may come as a kind of bittersweet boon, a reenergizing moment for the out-of-city Occupy.

“What we’ll miss is the intense public focus that came with the media attention on the tents,’’ said Harmony Wu, one of the organizers of both Occupy Needham and Occupy the Burbs, a loose-knit coalition of Occupy groups in the region.

“One benefit, though, is that we’ll have more time to focus on electoral pieces, staying focused and organized in the future to effect political change.’’

On Monday evening, 15 protesters gathered in front of a Bank of America branch in Newton Centre, holding signs and waving at the rush-hour traffic as they have since early October. Cars honked their horns in support, with some drivers holding up their fists to show solidarity, as the sign-holders waved in reply.

The group included Margaret Zaleski, a retired judge who said she frequently took food to the Boston encampment. Zaleski, who said she saw firsthand the cost of economic inequality in her Boston courtroom, thinks the Occupy movement will continue to grow. “We are everywhere,’’ she said. “The ideas are there, the issues are there, and people feel the issues.’’

For Wu, 40, a mother of twins, the past 10 or so weeks of Occupy Boston’s presence on the Rose Fitzgerald Kennedy Greenway has meant expending time and energy to keep the Boston site supplied and supported from the outside.

That’s on top of helping to organize the weekly vigils in Newton, and planning a Needham event Saturday.

“It’s a different reality that we now have to work in,’’ Wu said. “We offered ourselves if they needed something from the ’burbs. We came together in support of Occupy Boston because of the idea, but we come to it as people who want to see problems fixed, not just because we support people living in tents.’’

Artie Crocker, another Needham organizer, said the removal of the Dewey Square encampment could place the future of the Massachusetts movement somewhat in the hands of the suburban groups.

“In some ways it’s a great turn of events,’’ said the 52-year-old Crocker, an engineer and graphic designer. “The Boston encampment ended in a reasonably peaceful way. Some people are referring to it, now, as ‘on to phase two.’ I do know that we’ve been meeting all along, talking, figuring out how to spread the message more, how to bring to it even more clarity.’’

In Natick, organizers are seeking the transfer of knowledge learned in Boston to activists in the smaller groups.

Betsy Boggia, 46, an Occupy Natick organizer, said she wants her community to glean best practices from the urban experience. “We are going to be trained in facilitation by members of Occupy Boston,’’ said Boggia. “We want to establish a facilitation process and a documentation process, to have a website, to learn what kind of shared listserv helps, to keep meetings minutes and use the processes that were established in the Boston camp.’’

The training meeting, intended to be a regional session, is scheduled for Jan. 8 from 12:30 to 2:30 p.m. in a location that had not been settled.

In the meantime, Occupy Natick continues to hold its weekly downtown “visibility events.’’ Those will be augmented by new efforts, starting next month.

“Once we get trained, we’ll prioritize the issues we want to move forward on,’’ she said.

On many issues, the suburban Occupy groups are closely aligned with their urban counterparts. Their concerns are similar: economic equality, campaign finances, housing issues, health care, social justice, advocating an end to war, and the protection of the environment.

What is different between the city and the outliers, said Boggia, is that, despite weekly stand-outs in some communities, suburbanites tend not to take their activism to the point of confrontation.

“People aren’t interested in going out and getting arrested,’’ Boggia said. “That’s not a priority. I think we’ll find our own way.’’

In the wake of the Dewey Square eviction, Newton protesters expanded their scope last Saturday, gathering near the Bank of America in Newtonville.

“I see the ‘occupations,’ the camping out part of Occupy Boston, as a first step,’’ said Virginia Robinson, 79, an Occupy Newton organizer. “And that was a powerful, powerful step. There are many, many more steps. I think what is the sense of the group, here, is that we will begin to move more directly on the issues - many of them legislative issues.’’

J.J. Krawczyk, 51, an organizer with Occupy Lexington, said that local issues, such as the campaign for a property tax increase for school building projects, have pushed Occupy organizing to the back burner. The events of last Saturday will change that, he said.

“The clearing of Dewey Square is something to pivot on and I’m getting a local e-mail group together, finally, to generate some discussion,’’ Krawczyk said.

Meanwhile, the Peace Abbey’s 9-foot fiberglass statue of Gandhi was getting touched up with fresh paint for its next appearance. Randa said that if Boston organizers asked for it, the Peace Abbey would hold a vigil with the statue outside the courthouse should protesters face trial.