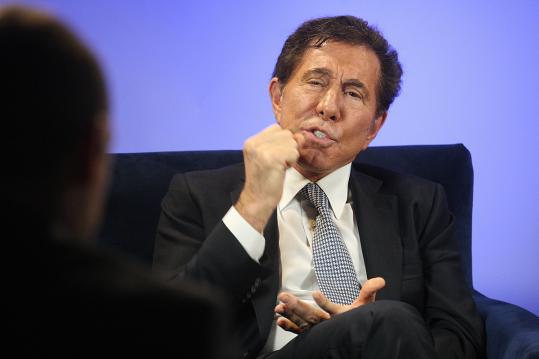 Las Vegas casino mogul Steve Wynn, in a letter sent over the weekend to Foxborough residents, is offering jobs and dangling the promise of free employee day care if residents will accept construction of a casino resort in their town.

The developer of some of the most prominent hotels and casinos on the Las Vegas strip also promised to “listen to your concerns carefully and address them individually,’’ in a soft-sell kickoff to the wooing of Foxborough.

The letter arrived in Foxborough mailboxes yesterday. Wynn sent out about 8,000 copies, targeting households that have at least one registered voter, according to Wynn spokesman Michael Weaver. The letter followed the release of a 10-minute video pitch for the project, featuring Wynn and New England Patriots owner Robert Kraft, who would lease Wynn the land for the casino on Route 1. The video aired over the weekend on Foxborough Cable Access.

Wynn, with Kraft at his side, announced earlier this month that he intended to pursue the rights to build a $1 billion casino and hotel resort near Gillette Stadium. Wynn’s plan would compete with a proposal at Suffolk Downs for the right to open a casino in the Greater Boston and Worcester area, defined by the state’s new casino law as including Foxborough.

The law also authorizes a resort-style casino and hotel in the southeastern part of the state, another in Western Massachusetts, and one slots-only gambling parlor.

Approval by a vote of the local community is one of the first hurdles in competing for casino development rights.

The sudden introduction of the casino proposal stunned many residents of Foxborough, already home to an outdoor sports stadium that hosts NFL football and major concerts that bring tremendous traffic.

So far, many residents of Foxborough and neighboring communities such as Walpole and Norfolk have loudly objected to the casino idea, setting up a Facebook page and attending a zoning meeting to complain. The Foxborough Planning Board voted last week to put off two key zoning changes needed for the casino.

“I can appreciate that some residents are fearful when they hear the word ‘casino,’ ’’ Wynn wrote to residents, tacitly acknowledging local resistance to the proposal. But he insisted that his primary business is not casino gambling, that it is developing “exemplary hotels.’’

A resident who received Wynn’s letter, Mary MacDonald, was skeptical. “If gaming is such a small part of what they do, why not just build a resort?’’ she said.

Jobs will be a major selling point. Wynn estimated that the project would create “up to 10,000’’ jobs, including direct employment at the resort and new jobs created for vendors and service companies doing business with the casino.

“Our employees are well compensated and well trained,’’ wrote Wynn. “Their careers range from finance to information technology to hospitality and everything in between.’’

As a postscript, Wynn added an example “of our commitment to families,’’ an offer of free day care for the children of casino employees while their parents are on the job.

In the promotional video, which ran on the Foxborough Cable Access channel, Kraft spoke directly to Foxborough residents, saying, “I want the town of Foxborough to have the best school system and social services of any city or town in the Northeast . . . and that can only happen with economic vitality.’’

The casino proposal could create that vitality without sacrificing the character of the town, Kraft said in the video.

Some of Wynn’s most famous hotels are monuments to Las Vegas opulence: He developed the Mirage, know for its intermittently exploding volcano, and Treasure Island, famous for full-scale pirate ship battles in a man-made lagoon.

Those properties will not be models for any local project, he pledged. “What is appropriate for Las Vegas is certainly inappropriate for Foxborough,’’ Wynn wrote to residents. “With your input, we will create a resort destination with the character of Foxborough at its heart.’’

In his video with Kraft, Wynn sketched out a vision of a hotel with a glass atrium “overlooking a garden, . . . pools, and tennis courts.’’ Sequestered in some far corner of the facility would be the gambling room, he said.

“It seems Mr. Wynn is counting on Foxborough residents to be dazzled by the same glitz and intrigue used to ensnare the gamblers in his casino,’’ Collin Earnst, a Foxborough resident and member of the opposition group, No Foxborough Casino, said in a statement. “At the end of the day, it’s still a casino, and it’s still a burden to our town, no matter how you dress it up.’’

Opponents hope to gather as many copies of the letter as they can and mail them back to Wynn with a note that says, “Thanks, but no thanks.’’

The Board of Selectmen is scheduled to meet at 7 tonight at Foxborough High School to discuss the proposal and set a date for a community meeting, the board’s chairman, Larry Harrington, said in an e-mail.

Selectmen had invited Wynn and Kraft to talk to residents this weekend, but the developers suggested a meeting in late January when their proposal is more concrete.

“Mr. Wynn, following his visit here and the input he received from a number of residents, has gone to work creating a preliminary conceptual design of what he would propose to build,’’ Kraft Group vice president Dan Murphy said in an e-mail to officials in Foxborough.

That preliminary design is expected to be completed next month. Until then, wrote Murphy, it is “too early to have an intelligent discussion of the proposal.’’