Hopkinton, Ashland vie to host marathon museum; others along route may join in after study’s release 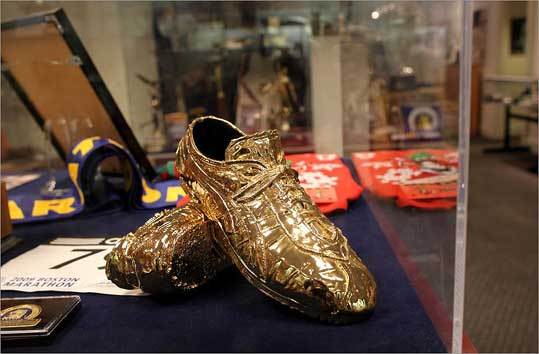 Every Patriots Day, thousands of runners pour into Hopkinton to run in the world’s oldest annual marathon.

Next year, the release of a $60,000 feasibility study could kick off a different kind of race, as communities along the 26.2-mile Boston Marathon route potentially vie to host a museum to the sport.

The goal is to honor the rich history of marathoning, from its roots 2,500 years ago in ancient Greece to the Nike- and Adidas-clad runners of today. And while the Boston Marathon would be an integral part of the facility, the intent is to make it much more than regional.

It would be “a museum about the sport, a hall of fame,’’ said Tim Kilduff, executive director of the 26.2 Foundation, formerly the Hopkinton Athletic Association.

Both Hopkinton and Ashland have expressed interest, and both have a case, officials and aficionados say.

Ashland served as the starting point for the Boston Marathon from the first race in 1897 until 1924, when the route was lengthened to the Olympic standard of 26.2 miles, according to Tom Grilk, executive director of the Boston Athletic Association, which oversees the race. Hopkinton since has been the site of the starting line.

But Kilduff expects more towns will eventually come forward, saying that arguments could also be made for Framingham, Natick, and Wellesley, which as the Marathon’s half-way point and home to Wellesley College is a “historic piece of the race.’’

He, of course, acknowledged that he’s partial to Hopkinton - as are others.

“Certainly Hopkinton is the Cooperstown of marathoning,’’ said Richard A. Johnson, curator of the Sports Museum in Boston and author of “The Boston Marathon,’’ as well as more than a half-dozen other sports-related books. “Everyone aspires to get to Hopkinton before they get to Boston. If ever there was a spiritual ZIP code for the race, and for the history of marathoning in this country, it would reside there.’’

But Ashland is pushing its role as well. The Ashland Redevelopment Authority recently proposed starting a half-marathon in town to raise money to improve its marathon park (which commemorates the original starting line) and to potentially develop plans for a museum. According to chairman Steven Greenberg, the authority was expected to meet with a consultant to discuss those plans this week.

“We thought it was something that would be of interest to runners, and that would boost some tourism here in town,’’ he said. However, he added, “we’re open to whatever’s best for Metrowest.’’

Those sentiments are shared by Matthew Selby, Ashland’s director of community development and health. “It’s not that anyone is competing against anyone else,’’ he said. “But if there is going to be a museum brought to the region, don’t dismiss Ashland.’’

Kilduff also agreed that there are “regional possibilities,’’ and that no matter where a museum ends up, it will become “a Metrowest, regional attraction.’’

And “Metrowest could use it,’’ he added. “This is not exactly a tourist mecca.’’

The details of the feasibility study have not been released, but Kilduff said it recommends one substantial, probably multimillion-dollar venue. The extensive report analyzed possible locations, infrastructure, public transportation access, traffic impact, as well as the demographic profiles of various towns along the route, according to Michael Neece, president of the 26.2 Foundation’s board of directors.

Once the study is released, the next step will be to determine which towns have interest, according to Neece and Kilduff, and a community site-selection committee would then likely be established, then funding sources would be identified and pursued.

Ultimately, Kilduff envisions something much more than just a display of sundry memorabilia.

“Another museum with a bunch of running shoes in it is probably not going to work,’’ he said. “There has to be something that would really set this apart from the typical sports museum.’’

His list would include interactive displays, educational components, an auditorium and meeting space, as well as a history lesson on the battle of Marathon in 490 BC that spurred the legend of the fateful run of Pheidippides.

Of course, there would be some memorabilia, which Neece said could include bib numbers, shirts, shorts, medals, and photographs of notable moments and famous runners. The future venue would likely seek these items through donations, he said.

Still, according to Johnson, marathoning is not a “memorabilia-driven’’ sport. “People are not trading cards of marathoners,’’ he said, also noting the lack of equipment such as in basketball or baseball that would be museum pieces.

So, he agreed, the interactive component would be key. He suggested the site even include a running track and establish itself as a training venue that hosts clinics and participatory discussions with marathoners and other long-distance runners.

“You would need that element to make this work,’’ he said. It shouldn’t just be a draw for the few days around the Boston Marathon, but “a crossroads of marathoning and the sport of distance running for 365 days.’’

Grilk of the BAA agreed, and said he’d also like to see a museum integrate components encouraging people to exercise and be fit.

But whatever shape it takes or wherever it ends up, the end goal will be the same: to celebrate the sport.

“Running has been described as a ‘universal language’ that’s understood by every human on the planet,’’ said Neece. “It’s a physical language, a shared experience that almost everybody enjoys.’’

A look at the future Marathon Museum