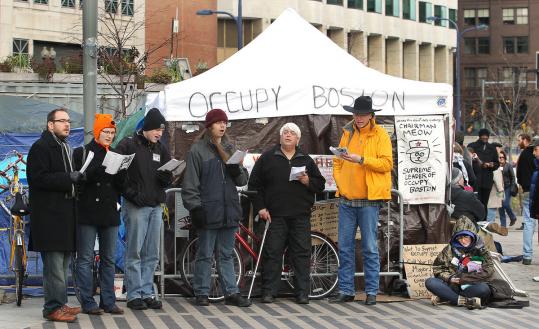 The City of Boston is vowing to block Occupy Boston demonstrators’ plans to move a winterized tent into the encampment today, citing a ban on bringing new building materials into the area.

“It’ll be confiscated before it gets in,’’ said Dot Joyce, a spokeswoman for Mayor Thomas M. Menino, of the tent that demonstrators hope to erect this afternoon.

Joyce said demonstrators had asked city officials before about bringing in new structures and were told it would not be permitted.

“We will not allow them to build a new neighborhood’’ in Dewey Square, she said.

Sage Radachowsky, 38, of Roslindale, a member of the Occupy winterization and fire safety working group, said yesterday at the encampment that demonstrators plan to install a fireproof tent that can hold up to 10 people.

He said they are informing police and city officials so that all parties can openly discuss the issue.

“We want to do this completely aboveboard,’’ he said.

Radachowsky said the group wants to improve relations with the city and Boston police, after a clash between demonstrators and officers last week over a sink.

Police said that after they seized the appliance Thursday night and put it in a police wagon, protesters surrounded the vehicle, resulting in the arrest of one demonstrator.

Radachowsky said that while he thought police overreacted during the confrontation, “I was not completely pleased with how we conducted ourselves.’’

Alerting authorities to the planned installment of the tent, he said, would open the communication lines between demonstrators and the city, regardless of the final outcome.

“If they won’t let the tent come in, then we’ll have a public explanation as to why not,’’ he said.

Elaine Driscoll, a spokeswoman for Boston police, would not comment yesterday on the plan for a new tent.

“I respectfully decline to comment beyond reiterating that we have made protesters aware that anything deemed building materials or considered a ‘structure’ will not be allowed,’’ she wrote in an e-mail.

Police yesterday announced two arrests in the encampment on Saturday, both at about 9:45 p.m.

In one case, Daniel Costello, 22, of Boston allegedly swung a small knife at another demonstrator, “missing his chest by a few inches,’’ according to the arrest report.

In the second case on Saturday night, Michael T. Young, 35, of South Boston was arrested on a disorderly conduct charge after knocking over tents and throwing objects, police said. The arrest report described him as a member of Occupy Boston.

Phone numbers for Costello and Young could not be found yesterday.

Ariel Oshinsky, an Occupy Boston media volunteer, said she was not aware of either incident in the police reports and she does not know the suspects.

She also said she doubts demonstrators will seek a confrontation with police if officers refuse to allow the tent on the grounds today.

“If they stop us, I’m assuming that we will probably comply with what they say,’’ she said.

Last week, a judge extended a temporary court order barring city officials from suddenly clearing the encampment until a hearing that must be scheduled no later than Dec. 15.

But amid the recent tension on the ground and the battles in court, demonstrators were treated to a little holiday cheer yesterday, albeit with a populist edge.

Members of the First Congregational Church of Somerville sang Christmas carols at an entrance to the encampment, with some reworked lyrics touching on the political issues that sparked the movement across the nation in September.

On “Away in a Manger/the Caymans,’’ carolers sang: “Away in the Caymans, no taxes to pay/ the large corporations keep money to pay/ their CEOs’ salaries, and bonus, and more/ but they have no money to hire the poor.’’

John Olson, a deacon at the church, said he wrote the new lyrics.

“Bring us some figgy pudding, we won’t go until we get some,’’ said Olson, placing emphasis on the word won’t. “Christmas and Christmas caroling is part of a history long associated with [changing] the order of the world.’’

Joan Schwartz, 65, of Brookline, a supporter of the Occupy movement who helps bring guest speakers to the encampment, said the expression of democracy there has been inspiring to watch.

As for the movement, “we can only extend a hand and hope that they respond.’’