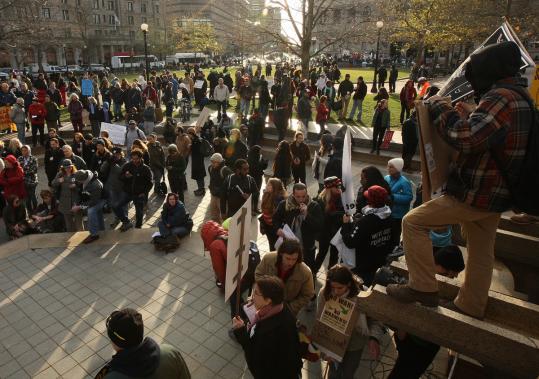 Would sending the police to pull up the tent stakes on Occupy Boston be unconstitutional under the First Amendment?

That is the question in the hands of the court and the case being made by protesters who say that eviction would deny them the most fundamental of American rights.

But despite the invocation of the sacred right of free speech, several constitutional scholars say the City of Boston holds a strong position in the dispute over the future of the Occupy protest in Dewey Square, so long as city officials can show that they’re not targeting the demonstrators because of their political message.

The steep legal challenge for the Occupy Boston movement will be to show that regulations against camping overnight in public parks are being selectively enforced on them, or that the regulations pose an unreasonable burden on them as they try to get out their message.

“No court that understands the law is going to say that because the Occupy Boston movement is speaking politically they have a magic immunity from regular public health and safety regulations,’’ said Don Herzog, who teaches First Amendment law at the University of Michigan Law School.

A more immediate legal problem for Occupy Boston, which is suing to prevent the city from evicting their two-month-old encampment, may be that the city is not yet trying to move them. Courts, scholars say, are often reluctant to rule preemptively.

“There are no facts that have ripened into a real case because the Boston City Council and the mayor don’t yet want to evict the occupiers,’’ said Richard Albert, a professor of constitutional law at Boston College. “Seems to me the most prudent thing for the court to do is decline to decide.’’

After police last month took down the Occupy Wall Street encampment in New York, representatives of Occupy Boston filed a lawsuit in Suffolk Superior Court on Nov. 15, seeking to prevent the City of Boston from evicting protesters from the half-acre site next to South Station that they have inhabited since Sept. 30.

Judge Frances A. McIntyre issued a temporary order last month preventing the city from taking down the camp, pending a hearing. After a hearing on Thursday, she extended the ban as she deliberates. She has promised a decision by Dec. 15.

Protesters have argued in court that their 24-hour encampment is a form of symbolic speech, and that any ban on overnight camping in city parks is unconstitutional because it effectively leaves the Occupy movement no public space to express its particular message, which has been described as a broad complaint against wealth inequity and the outsized political influence of corporations and richest 1 percent of Americans.

Much of the movement’s legal filings in the case are intended to support its claim that the encampment is a form of protected speech.

Scholars agree that “speech’’ is defined more broadly by the courts than just words shouted from atop a soapbox and that political acts can fit under the definition.

“There’s no doubt they’re exercising their freedom of expression,’’ Boston College law professor Mary-Rose Papandrea said of the Occupy encampment. “And very deeply ingrained in the Supreme Court’s First Amendment jurisprudence is the commitment to parks, streets, and sidewalks as quintessential public forums - the places people should go and express themselves on whatever issue moves them.’’

“Any blanket closing of the park [to political protests] would be deeply problematic,’’ she said.

But the Supreme Court has also recognized that the government can have legitimate reasons for restricting public spaces and has upheld so-called “time, place, and manner’’ restrictions on speech, as long as the restrictions do not target the speaker’s message, said Kent Greenfield, also a Boston College Law School professor.

An easy example: It is perfectly legal to hold a signboard criticizing (or praising) the policies of the US government - but you can’t hold the signboard in the middle of Interstate 93. That would not be a free-speech issue, according to court precedent, because the police would remove anybody who blocked the highway and created a safety hazard, regardless of what they were trying to say.

Herzog offered a more subtle example: Suppose the city sprayed insecticide every month in a public park. On that day, park visitors are supposed to leave. “But you’re standing there with a sign that says, “Impeach Obama’’ or “Reelect Obama’’- it doesn’t matter what the sign says - and you say to the city: ‘You can’t make me leave. This is a public space and I have a political message.’

“The legal answer is that your message is irrelevant. You have to leave for the same reason everybody else has to leave - they’re spraying insecticide.’’

Government officials would have the discretion to delay the insecticide treatment to accommodate a political protest but would not be obligated to do so, he said.

In responding to the Occupy Boston lawsuit, the city has argued it has the right to enforce fire, building, and sanitary codes it says the encampment fails to meet, as well as enforcing regulations banning overnight camping in public parks. “If the city says it restricts people camping in parks - whether they go there to protest the [richest] 1 percent, or the Vietnam War, or just because they like to camp - then probably the city is well within its right’’ to stop people from staying overnight, said Greenfield.

“The evidence that will be relevant is whether indeed the city kicks [other] people out when they are sleeping in the park,’’ he said. “If it turns out the city doesn’t enforce the regulation except when people are actually protesting, then that law might be seen as a pretext’’ to shut down speech.

In some free-speech cases, courts have struck down public space restrictions as unreasonable. “There have been Supreme Court decisions that say time, place, and manner rules about public assembly or public distribution of leaflets can be so burdensome that they don’t leave enough breathing room for the speaker,’’ said Harvard Law professor Laurence Tribe.

Regardless of the outcome, Tribe said the protesters are raising an important free-speech point by trying to immunize themselves against a police raid: Police around the country have been accused of rough treatment when breaking up Occupy protest. Some protesters in California, for example, were hit with pepper spray. The prospect of being manhandled or gassed by the police “is a serious threat that just may make a lot of people too scared to be part of the movement,’’ which, said Tribe, could chill free speech.