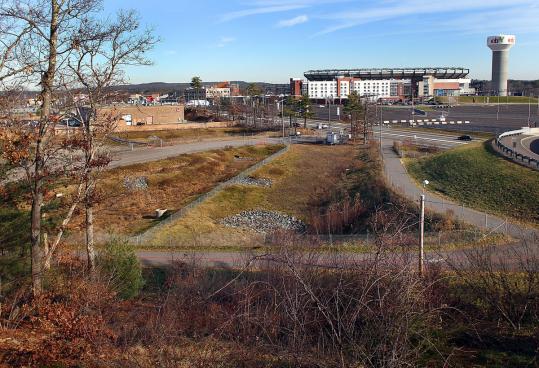 A view of Gillette Stadium showing the entrance to one of several parking lots across the highway from the facility. (John Tlumacki/Globe Staff)
By Noah Bierman and Casey Ross Globe Staff / December 3, 2011
Text size – +

The emergence of a likely partnership between New England Patriots owner Robert Kraft and Las Vegas gambling mogul Steve Wynn has shaken up the competition for a coveted casino license, reshaping expectations of which developers are best positioned to cash in on the state’s newest industry.

There remain many unanswered questions, including whether a business relationship between Kraft and a casino operator could run afoul of NFL rules and whether the already congested area around Gillette Stadium can accommodate another high-traffic business. But if Kraft, who would lease property to Wynn, can clear those hurdles, the partnership is expected to be formidable.

“I’d hate to be the competitor who’s going against’’ Wynn, said William N. Thompson, a gambling specialist and professor at the University of Nevada Las Vegas.

Thompson said that for the past 15 years, Wynn has run a more glamorous operation than Caesar’s - the gambling company teaming up with Suffolk Downs on a bid to build a casino in East Boston.

A proposal for a $1 billion Foxborough casino would compete head-to-head against the similar-scale proposal at Suffolk Downs for one of three resort casino licenses authorized by the new state gambling law. Many industry analysts and political observers had deemed Suffolk the front-runner for a license designated for the Boston region, which stretches as far west as Worcester and as far south as Norfolk County, where Foxborough is located.

Mayor Thomas M. Menino yesterday strongly defended Suffolk as the location of choice. “We are the capital city. We generate the economy of Massachusetts,’’ he said. “I’ve always said my position is [that] I’m in favor of a full casino at Suffolk Downs.’’

A third developer likely to compete for the Boston-area license, David Nunes, chairman of Ajax Gaming Ventures, said yesterday that a Wynn-Kraft bid could have its own problems because it could be close to a potential casino in the southeastern part of the state, where the Mashpee Wampanoag tribe has been shopping for land. The tribe has a right to negotiate exclusively with Governor Deval Patrick for most of the next year under the state’s casino law.

“If the Native Americans show up within 10 miles [of Gillette Stadium] it’s going to make it awfully difficult’’ to put a casino there, said Nunes, who is proposing his own casino in Milford.

Suffolk would not be the only potential loser if Wynn and Kraft put together a winning bid. In addition to allowing three resort-style casinos, the new law also allows a slot machine parlor, which is expected to draw bids from two race tracks, Plainridge and Raynham, as well as other facilities around the state.

Both Plainridge and Raynham are located within a few miles of Foxborough, and the commission that awards casino and slot machine licenses is unlikely to put two gambling facilities that close to each other.

George Carney, owner of Raynham, said he already has a contingency plan: If it appears the Kraft-Wynn team is likely to win a casino license, he will instead submit a bid using 60 acres he owns in Brockton, he said yesterday.

Gary Piontkowski, president and co-owner of Plainridge, said he is not worried about a potential casino in Foxborough, even though his property sits just 3.9 miles away. He noted that the slot license will go to bid before the casino licenses, meaning his facility could be up and running before a Wynn-Kraft bid is even considered.

“That’s business. It’s competition. If you walk along the strip in Vegas there’s plenty of opportunities to game there,’’ he said. “I don’t care if there’s 10 of them on Route 1.’’

State political leaders said the splash caused by Kraft and Wynn proves the competition for a casino license is open, despite assumptions from many analysts and industry insiders that Suffolk Downs is favored by lawmakers.

“I would think that it puts it to rest,’’ said Representative Joseph Wagner, a Chicopee Democrat who helped craft the law.

An independent gambling commission, which has not yet been appointed, will decide which developers win the right to open casinos. Governor Deval Patrick and House Speaker Robert A. DeLeo both said through spokesmen yesterday that they had not discussed the casino proposal with Kraft and that they were eager to let the commission pick the strongest proposal.

“More competition is better for our state,’’ DeLeo said in a prepared statement.

Still, the potential showdown between Suffolk and Kraft creates an interesting political dynamic. Suffolk is in DeLeo’s district and he has fought hard for the interests of track workers, as has Menino.

But Kraft has forged a strong relationship with Patrick, helping to arrange the governor’s mission to Israel this year, advising him often, and seeking his help in gaining public money to build a pedestrian bridge linking the property he owns on Route 1 with the Patriot Place mall and Gillette.

Kraft’s biggest obstacle may be the National Football League, which has taken a fairly strong stance against allowing its owners to have financial relationships with gambling facilities.

Members of the Rooney family, longtime owners of the Pittsburgh Steelers, were forced by the league in recent years to divest from the team because the family has also owned race tracks in Yonkers, N.Y., and Palm Beach, Fla., for many years.

“For the most part, the NFL just wanted to get as far away from gambling interests as they could,’’ Patrick Rooney Jr., president of the Palm Beach Kennel Club, said yesterday.

Rooney said his wing of the family went from owning 16 percent of the team to holding just 2 percent, with no control, because of their association with gambling.

Kraft’s relationship could be allowed, however, because while he would own the land, he would lease it to Wynn, who would own and run the casino. The owner of the Miami Dolphins, Steve Ross, is pursuing a similar strategy, with 300 acres around Sunlight Stadium, as Florida considers allowing new casinos.

“If the land is chosen as a site, we would likely dome it and make it part of a larger entertainment complex,’’ said Ron Book, the longtime Dolphins lobbyist.

There are already casinos located near NFL stadiums in New Orleans, St. Louis, and Pittsburgh. NFL spokesman Greg Aiello said yesterday that Kraft had not given the league a formal proposal.

“Nothing has been presented to us concerning the specifics of any arrangement. If and when that occurs, we will evaluate the transaction under our policies,’’ Aiello said in an e-mail.

The Massachusetts casino law could present one additional snag. Language in the law suggests that anyone with a financial interest in a casino could be required to be a party on the gambling license. A Patrick administration official said yesterday that it would be up to the gambling commission to interpret that clause, and it may or may not apply to the property owner.

The Kraft Group confirmed yesterday that it would lease the land to Wynn, but it does not consider that to be a financial interest in a casino.

Greg Bedard and Frank Phillips of the Globe staff and Globe correspondent Matt Rocheleau contributed to this article. Noah Bierman can be reached at nbierman@globe.com. Follow him on Twitter @noahbierman.