Hubway to branch out next spring

Bikes, stations will debut in Cambridge and Somerville 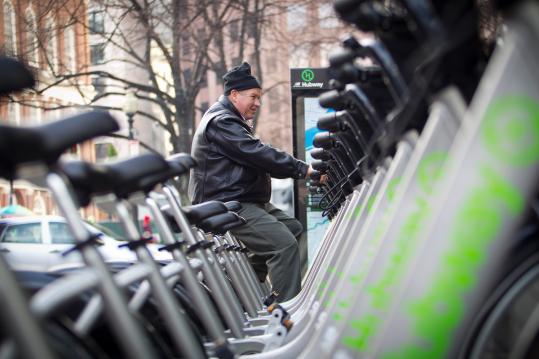 After recording 140,000 trips in four months, Boston’s European-style bicycle-sharing system is expanding across the Charles River, with stations planned for Cambridge and Somerville after a winter hiatus.

The 60-station, 600-bike Hubway system will shut down Wednesday night and reopen in March, weather permitting, when it will quickly expand - adding 30 stations and roughly 300 bicycles beyond Boston’s borders.

Cambridge officials said they hope to concentrate 20 stations in the most densely populated swaths of their city, and Somerville expects to usher in eight stations.

Back on the Boston side of the Charles, Brookline is working on two stations it hopes to open soon after the Cambridge and Somerville expansion.

“The number one question I get in my office overall is, ‘When is Hubway coming to Brookline?’ ’’ said Jeff Levine, director of planning and community development in Brookline, which intends to introduce stations at Coolidge Corner and Brookline Village.

Bicycle-sharing arrived in Boston in July, greeted with a mix of excitement and skepticism. But in its first 2 1/2 months, Hubway recorded 100,000 station-to-station rides, significantly eclipsing the pace of similar systems in Minneapolis (where Nice Ride needed six months to reach that mark) and Denver (where B-cycle needed 7 1/2 months).

“The ridership just blew past all of our expectations,’’ said Jessica Robertson, transportation coordinator with the Metropolitan Area Planning Council, the regional organization that helped plan Hubway and paired Boston with the company that won the contract to operate the system, Alta Bicycle Share Co.

“There was a lot of buzz over the summer about all the things that could go wrong - ‘there’s going to be chaos on the streets’ - and none of that really happened,’’ Robertson added.

About 45 percent of the trips were taken by Hubway’s 3,650 annual members, who primarily used the system for commuting and errands, with the rest recorded by tourists and riders with short-term passes.

The system - funded in part by a $3 million grant from the Federal Transit Administration - is intended as an extension of public transit and designed for short trips. Annual members (who pay $85) and those with one-day ($5) and three-day ($12) memberships can take unlimited rides but must return their bikes within 30 minutes; trips exceeding half an hour incur additional fees.

Annual members understood, with their rides lasting an average of 17 minutes. The popular depot at North Station - which Hubway quickly expanded from 33 to 47 bike slots to keep up with demand - emptied quickly whenever commuter trains arrived in the morning. And it required regular visits from a Hubway van that removes or adds bikes at full or empty stations to supplement riding patterns, said Scott Mullen, Hubway’s general manager.

In contrast, one- and three-day users took bikes out for an average of 70 minutes, Mullen said, suggesting unhurried sightseeing but also less familiarity with Hubway’s escalating price structure, which mirrors other bike-sharing systems but is unlike that for most products and services.

So the customer service team was forgiving of first-time riders who misunderstood and were startled later to discover credit card charges of $6 (for 1 1/2 hours), $14 (two hours), or even $100 (seven hours) for meandering trips, said Nicole Freedman, director of Boston Bikes, Mayor Thomas M. Menino’s initiative aimed at making biking safer and more popular.

When Menino announced his goal of bringing to Boston something akin to Paris’s Velib, skeptics predicted disaster: tourists and inexperienced cyclists weaving down narrow and unpredictable streets amid inhospitable traffic - to say nothing about theft and vandalism.

But Hubway has experienced no serious crashes and only two reported accidents, neither of which required ambulances. Bikes and stations have proved resistant to theft and destruction, and graffiti is rare, Freedman said.

The crash rate for Hubway riders is well below the average for other cyclists, which may be a reflection of its safety features - sturdy bikes with automated lights - or the behavior of riders. However, less than half of Hubway users appear to wear helmets, compared with nearly three-quarters of those on other bikes, according to a recent census at 20 locations.

The city has tried to boost that by directing Hubway users to more than 30 shops where they can purchase subsidized helmets for less than $10, Freedman said. But spur-of-the-moment riders often went helmetless.

While word of the winter closure has prompted a flurry of come-back-soon posts on Twitter and Facebook from Hubway users, the system has continued to attract new riders even while being dismantled.

Outside the Boston Public Library, bikers came and went last week while tourists and shoppers paused to snap photos of the sleek, solar-powered kiosk. Some peered at the map or tapped the touch screen on the ATM-style terminal; others squeezed the hand brakes or placed children atop the seats of docked bicycles.

Navid Yousefian, 23, sightseeing in Back Bay, stopped with two friends. They wanted to visit the Occupy Boston encampment and keep exploring and decided Hubway would be more immediate, cheaper, and fun in mild weather than taxis or the T.

“It’s a real good chance to go over all the city and see everything, and also I think the price is good,’’ said Yousefian, a Boston College graduate student from Iran. He had ridden it once before and said he would consider an annual membership if Hubway expanded toward Chestnut Hill.

Freedman and others envision a day when Hubway will have hundreds of stations and thousands of bikes, but for now its growth is constrained by funding, with no date set for expansion to Jamaica Plain and other outlying Boston neighborhoods.

Though user fees and sponsorship will eventually cover operating expenses, the startup costs for new bikes and stations - purchased by the host communities - has required public investment. Alta, which supplied the equipment, provides customer service and maintains bikes and stations.

Menino sought to avoid using local tax dollars, with Boston instead securing more than $3 million in federal, state, and local grants and raising nearly $1.9 million from 19 sponsors, anchored by $600,000 from New Balance.

Cambridge raised $300,000 from Harvard and MIT, along with more than $900,000 in federal and state grants, and $280,000 from a city account fed by parking permits and designed to reduce car travel, said Susanne Rasmussen, Cambridge’s director of environmental and transportation planning. Among the hotspots where the city plans to establish bike stations: Harvard, Central, Porter, Inman, Lechmere, and Kendall squares.

Somerville is using its share of $300,000 from the federal transit grant and a roughly equal match from the city’s general fund to open stations near Ball, Teele, Davis, Porter, and Union squares as well as at City Hall, Kirkland Village, and Conway Park, said Hayes Morrison, Somerville’s director of transportation and infrastructure.

Brookline aims for a similar opening date in 2012 but may trail its urban neighbors, because town officials wanted to avoid using municipal dollars or selling ads, drawing instead from about $200,000 in federal and state grants and $50,000 in gifts. The selectmen have not approved the Hubway contract, but the system’s strong start helps, Levine said.