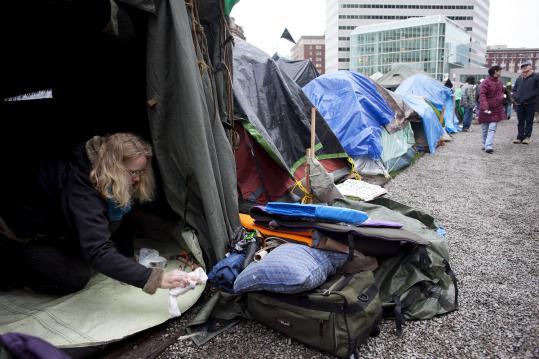 The average Occupy Boston protester is 34 years old and more likely to be a man than a woman. There is a 50-50 chance the protester has a job. Chances are he or she sleeps overnight at the encampment on Dewey Square, where many of them have lived for at least a month.

A survey of some 60 protesters at the Occupy Boston site, conducted by the Globe on Monday, sketches a portrait of a resilient, dedicated group drawn from surprisingly varied walks of life.

Half of the Occupy Boston protesters surveyed said they are unemployed, and two-thirds of the jobless said they have not had work for more than one year. Several said they were underemployed, or working several jobs.

One general theme united them: what they see as economic inequality in their lives and throughout the country.

“My goal is really a social and political revolution,’’ said Jason E. Iarossi, 45, of Methuen, a father of two who said he works three part-time jobs.

Similarly, Terranova Kallemeyn, a 35-year-old librarian from Allston, said: “I don’t agree with corporations getting tax breaks when they are funded by people who aren’t rich.’’

Three out of every four surveyed were men. Slightly more than half of those surveyed said they were from outside of Boston. While half of the protesters said they are younger than 30, the age range of people interviewed Monday varied from 18 to 81.

“I think being here is the point. What these people are doing is amazing,’’ said Michael Lyons, 47, who is chairman of the Board of Selectmen in Norwood.

“I’ve wanted to have this conversation my whole adult life,’’ Lyons said. He said he was “trying to make the world a better place.’’

The Boston camp, one of more than 100 around the country, formed along part of the Rose Fitzgerald Kennedy Greenway on the final day of September. An estimated 200 people live inside a closely packed group of around 100 tents.

Five Globe reporters visited the camp Monday, asking dozens of protesters eight questions about their background and the reasons they were there. Not everyone would answer the questions, and some protesters encouraged others not to answer. Sixty agreed to be interviewed.

Arthur Shepherd, 55, a former social worker for the Veterans Administration now living on Supplemental Security Income, said he was protesting the “gradual encroachment and violation of our civil liberties.’’

Shepherd’s reasons for protest ranged from complaints with the Bush administration policy against showing coffins of soldiers killed in Iraq and Afghanistan to the parking policies in Boston and Cambridge.

Economic inequality came up over and over again.

“Children should be able to go to school without parents going broke,’’ said Coreen Fortunato, 38, who said she has been homeless for years and lives in a shelter.

“We have every right to resist, whether we choose to exercise that right or not,’’ Shepherd said. “We deplore the use of the police against the people when they are protesting peacefully.’’

John Murphy, a 24-year-old student, said he would peacefully resist arrest if police attempt to move the protesters out of the camp.

Yesterday, Boston police estimated overtime costs related to the Occupy Boston movement to be $600,000. As costs mount in many cities, so too does pressure to move protesters out of the public parks where they have camped.

Hundreds were arrested on Nov. 15 at New York’s Zuccotti Park as the Occupy Wall Street camp was cleared; protesters were later allowed to return there, but without overnight gear.

In Boston two days later, a Suffolk Superior Court judge issued a restraining order against the city barring police from removing the protesters from their encampment at least until a Dec. 1 hearing, unless there is a fire, medical emergency, or “outbreak of violence.’’

While the board of the nonprofit Rose Fitzgerald Kennedy Greenway Conservancy that manages Dewey Square Park has formally asked the city to remove the Occupy Boston demonstrators from the area, citing public safety concerns and other issues, the city has not announced any date or other plans to evict the protesters.

On Oct. 11, Boston Police arrested 141 protesters on trespassing charges when the group’s campground expanded to, and refused to leave from, a newly renovated section of the Greenway that authorities had specifically asked the activists to avoid.

A small number of criminal complaints, including some vandalism accusations, have been reported since the movement began. Arrests have been made on charges of disorderly conduct, larceny, drug possession, and assault.