Calls for help continue to rise as donations fall 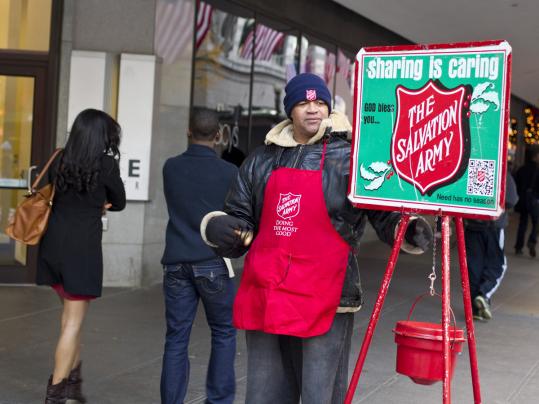 As Massachusetts charities enter a fourth holiday season since the economic collapse, many families - especially those with children - are struggling to afford basic necessities, say those who work with the poor.

Calls to United Way’s help line have doubled since 2008, with nearly 100,000 people so far this year looking for a way to make rent, put food on the table, or keep the power on. Catholic Charities, which five years ago distributed 5,000 pounds of food each month, is now up to about 48,000 pounds.

Project Bread reports that more than 10 percent of Massachusetts households surveyed over the past three years worried about having enough food, the highest level in Massachusetts since the federal government began collecting the information in 1995.

“In city neighborhoods some of the need is just overwhelming,’’ said Ellen Parker, who directs the antihunger group. “As a result, there’s less service available.’’

At the same time, the economic woes have cut into donations by those who have given in the past. About one-third of Salvation Army food programs are running low on supplies. The Home for Little Wanderers, a child and family service agency in Boston, has received 750 fewer donated winter coats than this time last year.

“So many people are hurting and they need to really take care of themselves first before they can help others,’’ said Catherine D’Amato, president of the Greater Boston Food Bank.

In response, charities are searching for new ways to collect donations. The Massachusetts Salvation Army, whose red donation kettles and volunteer bell-ringers are a sure sign of the holiday season, recently began accepting donations through smartphones.

“We have a goal of helping everyone who has a need,’’ said Ivan Rock, general secretary of the Massachusetts Salvation Army. “If that means we need to find new, creative ways to find income, that’s what we’re going to do.’’

“More corporations are coming to us with two purposes: One is, how can they stretch their dollar further? And number two, how can they focus their funding?’’ said Brian Adams, spokesman for the United Way of Massachusetts Bay and Merrimack Valley.

United Way has also expanded the scope of its assistance, boosting the number of turkey dinners it distributes from 1,000 dinners in 2009 to 5,000 this year and last.

But in some cases, donations are falling through. The Greater Boston office of Catholic Charities recently heard from two companies that reneged on their commitments of turkey donations, leaving them 275 dinners short.

“All of a sudden the numbers just don’t come together,’’ said Beth Chambers, the group’s director of community services.

In recent days, Chambers fielded many urgent calls for help, often from people who had just been laid off and didn’t know where else to turn.

That means that charitable organizations - as in many households - are getting accustomed to working harder to break even.

Paul Schervish, the director of Boston College’s Center on Wealth and Philanthropy, said financial insecurity has put a clamp on individual giving for years, with many traditional contributors giving much less than they otherwise might have. Factors that could be daunting individually - dwindling retirement funds, fear of losing their homes or jobs - are weighing on people’s minds at the same time external factors like the European debt crisis are unsettling them.

“Insecurity is the enemy of philanthropy - even more so than it’s the enemy of consumption,’’ said Schervish. “There are multiple dimensions of uncertainty and insecurity, not just small things happening but major.’’

A chief concern this year is the rising cost of heat. Families that heat their homes with oil are expected to spend a record amount this winter, with bills forecast to rise nearly $200.

“People are hurting as never before,’’ said Colette Greenstein at Action for Boston Community Development, an antipoverty group that has already received more than 15,000 applications for heating assistance this year, with winter still weeks away.

In Boston, ABCD this week launched a “winter emergency campaign,’’ saying thousands of children and seniors were at risk without winter clothing, blankets, and fuel assistance.

The campaign notes that $70 will buy a coat, boots, and gloves for a child, $100 would buy four blankets, and $25 will buy the groceries for a family dinner.

“The truth is, there are less people that have those resources,’’ D’Amato said.