The 56th annual Boston Globe Santa Fund Drive gets underway today with its traditional mission to raise sufficient funds so that thousands of children in hundreds of needy families in 171 Eastern Massachusetts cities and towns will have gifts to open on Christmas morning.

The drive gets underway in the midst of one of the most severe economic situations in the history of this country, a situation that has left many parents unemployed and often without even adequate housing.

The 145 certified charity organizations that process applications from families for assistance from Globe Santa have reported a severe increase in the number of requests over last year, with one agency saying they have been processing some 60 percent more requests than in the days prior to Christmas 2010. The deadline for submitting applications has passed.

As a result, Globe Santa is hoping that new people and new companies and organizations will join thousands of long-time contributors in helping raise in excess of last year’s total of $1,413,667.99.

Over the previous 55 years Globe Santa, thanks to his generous friends, had raised $40,000,016 and been able to provide 13.3 million gifts for some 2,560,000 children in more than 1 million Eastern Massachusetts families.

All money contributed to the Globe Santa Fund goes toward purchasing gifts. The Boston Globe Foundation provides funds for the administrative costs of the campaign and the distribution of gifts, which is again being carried out by the men and women of the US Postal Service.

The work leading up to the vast Christmas gift distribution traditionally begins soon after the first of the year, with arrangements being made for toy and gift buyers to attend the spring and summer toy and gift shows.

The purchases are then sent to the Globe Specialty Products facility in Millbury, and it is from there the gift boxes are packed and shipped.

The gift boxes are prepared with the age and gender of the child receiving the gifts in mind.

Meanwhile, in the early fall, another group of Globe Santa workers begin the coordinating and the scheduling of the scores of fund-raising events that are held in the days prior to Christmas and just after, events ranging from the Radio City Christmas Spectacular starring The Rockettes to a cake sale held by a group of elementary school students. Children helping children has always brought a smile to Globe Santa’s face.

Globe Santa will start making his rounds aboard his special sleigh tomorrow with a visit to Faneuil Hall marketplace from 11 a.m. to 2 pm and Sunday at The Launch at Hingham Shipyard for 11 a.m. to 4 p.m.

On many of his visits during the next several weeks, he will be accompanied by Santa Helpers who include prominent sports, political, and business figures of the region.

Over this weekend, Globe Santa will also be installing donation boxes at the Wang Theatre and at the Improv Asylum on Hanover Street.

Notices and dates of Santa’s activities during the entire Christmas season will not only be published in The Boston Globe but also on the BostonGlobe.com and the Boston.com websites. 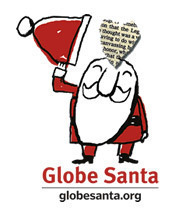