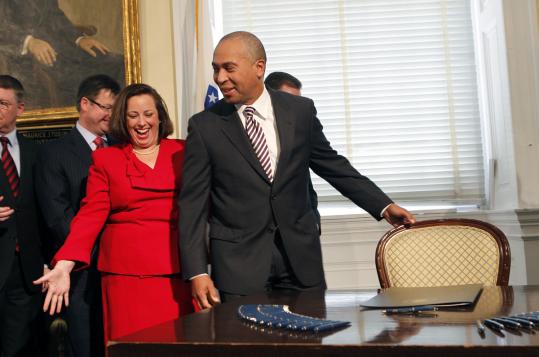 Representative Kathi-Anne Reinstein welcomed Governor Deval Patrick to sit down and sign the council bill in the governor’s council chambers in Boston. The decision has alienated some of his earliest supporters.
By Frank Phillips Globe Staff / November 23, 2011
Text size – +

With a stroke of a pen yesterday, Governor Deval Patrick brought a sea change to Massachusetts: the legalization of a gambling industry.

In what is perhaps his most significant bill signing since his election five years ago, the governor broke one of the state’s last strands to its Puritan culture. Not since most Blue Laws were wiped off the books three decades ago has a governor and a Legislature approved such a dramatic departure from its original moral groundings.

Patrick, whose support for casinos and a slot parlor was critical, was keenly aware - and defensive - of what he was doing. Promoting the legislation as a job-creating initiative, he emphasized that the approval of casino gambling met his moral benchmarks.

“I never have had a moral objection to gambling,’’ the governor told reporters at the State House event, returning to that theme several times in his answers to reporters’ questions. “I respect those who have a moral objection, but I am not one of them.’’

Still, he was clearly aware that he was causing a stir among many of those who had rallied to his early campaign rhetoric, when he called for a “politics of conviction’’ and vowed to break the Beacon Hill culture and the special interests that dominate it.

It was that bloc of voters - liberal activists, reformers, social service advocates, and independents - who helped launch his insurgent, long-shot candidacy in 2006 and who helped him battle back from the political graveyard in last year’s reelection campaign.

His decision to back the legalization of casinos and a slots parlor cut sharply across the grain of that coalition.

“It is a sad story,’’’ said Susan Tucker, a former state senator and Andover Democrat who was an early and enthusiastic Patrick supporter. “The first I heard that he was considering casinos was on my car radio. I nearly drove off the road.’’

“This seems so much in conflict with everything he stood for when he first ran,’’ said Tucker, who has been a leader in efforts to stop the casino legislation.

But Patrick, with a background in corporate America, had always projected a more complex philosophy than the traditional Massachusetts liberal.

If those political supporters had listened more carefully in 2006, during his first run for public office, they would have picked up on a message he was sending them. “You should stop trying to put me in a box,’’ he kept saying during the campaign when he was criticized for his corporate background as general counsel for Texaco and Coca-Cola.

Within nine of months of being sworn in, Patrick announced a plan to legalize three casinos. It hit much of his political base in the gut. With some skill and luck, Patrick was able to avoid some of that backlash in last year’s election, held just months after gambling legislation bogged down over sharp differences between him and the Legislature.

The political consequences for Patrick are now minimal, according to analysts. His decision to announce he would not seek another term has freed him from the pressures of electoral politics.

But just as importantly, the anticasino opposition, while outspoken, has accepted defeat. It was steamrolled by a gambling industry that spent millions of dollars in lobbying Beacon Hill. It also never effectively countered labor unions’ arguments that the construction and operations of the casinos would create thousands of much-needed jobs.

“I don’t think there is a rebellion; I think there is a resignation,’’ said Jeffrey M. Berry, a Tufts University political science professor who closely monitors Massachusetts politics. He said Patrick has helped to ease their concerns by focusing on areas they strongly support, including social services and health care.

That mood was evident this week when Michael S. Dukakis, the former governor and a steadfast opponent of legalized gambling, was asked about Patrick’s role in creating a casino industry in Massachusetts. He displayed an understanding that only a former governor could have.

“You don’t expect to agree with everything the guy does,’’ said Dukakis.

“We are disappointed, but I did things my supporters weren’t happy about,’’ Dukakis said. “On the whole, he has been a good governor. . . . I am a big fan of what the governor has done on the economic scene. He should be proud of it.’’