Sun, ‘Infinite Corridor’ align for their light show at MIT 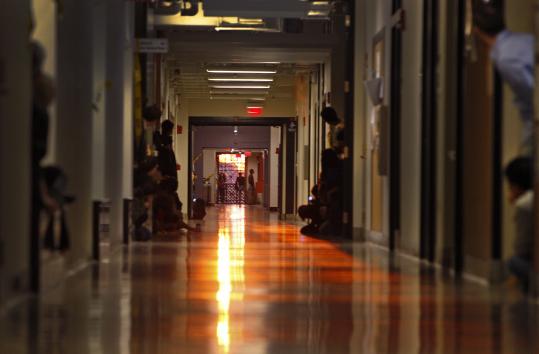 People peered from office doorways along the third floor of MIT’s Infinite Corridor as the sun aligned to create a warm reflection that was mirrored on the polished floors. (Barry Chin/Globe Staff)
By Brock Parker Globe Correspondent / November 12, 2011

CAMBRIDGE - The sun did not disappoint.

Students, faculty, and the just plain curious had gathered in a Massachusetts Institute of Technology building yesterday afternoon after enthusiasts had predicted that at 4:20 p.m. the sun would align with the 825-foot hallway known as the Infinite Corridor.

As if on cue, a blaze of orange shone through the window of 77 Massachusetts Ave. and lit up the long corridor as about 100 spectators oohed and ahhed and snapped photos of the scene. Some had crowded into stairwells, and other stood flat against the walls of the corridor to see the phenomenon dubbed MIThenge.

“It was just so gorgeous,’’ said MIT freshman Micah Madison, 18. “I’m actually going to text a picture to my mom.’’

The event has developed a cult-like following over the years at MIT, as students known for their mathematical know-how have tried to demystify exactly when the sun aligns with a window on the west end of the hall and sends light blazing off the shiny floors. The alignment typically occurs twice a year in November and January, but this year the phenomenon seemed to have an added portentousness because it was predicted to occur on 11/11/11.

Alan Eliasen, an amateur astronomer from Colorado who has been working with MIT alumni to predict MIThenge, had believed the cosmic event would happen yesterday at about 4:20 p.m., when the sun was likely to be at an optimal altitude above horizon obstructions and below the upper limits imposed by doors and ceilings in the corridor.

But after watching the sun shine through the corridor, J Baumgart, a researcher from Somerville who has worked with Eliasen to track MIThenge for several years, said it seemed like the sun was slightly high yesterday, meaning it was a near-miss and the sun might make a more direct hit this afternoon.

Eliasen has said one of the biggest problems he’s had with making predictions of MIThenge is that the true azimuth, or angle formed by the corridor with a point on the horizon, is not exactly known. But by using observations provided by MIT alumni Ken Olum and Lenny Foner, as well as historical photographs, GPS measurements, and video records, Eliasen said he’s been able to improve the predictions.

Keith Winstein, a graduate student at MIT who maintains a website about MIThenge, showed up more than an hour before the phenomenon was expected to occur yesterday to set up a camera and record the event. He spent much of his time trying to coach other spectators to the sides of the hallway so his view would not be obstructed.

Other researchers placed caution tape across entry ways to keep people from interfering.

In the moments before the sun began peeking through the window, students scrambled up and down stairs trying to find a place amidst the crowd to see it from several different floors of the building. “This is exciting,’’ one student said while running down a hallway.

Jean Ahearn, 49, whose son, Michael Ahearn is a student at MIT, said she drove from Peabody to Cambridge just to see MIThenge. Ahearn said she didn’t expect to see so many other people on hand for the event, which she termed to be a bit nerdy. When the setting sun’s orange light reflected through the corridor, Ahearn snapped a photo to remember it by and said she was glad that she came.

Brock Parker can be reached at brock.globe@gmail.com. For more coverage of Boston-area cities and towns, go to boston.com/yourtown.