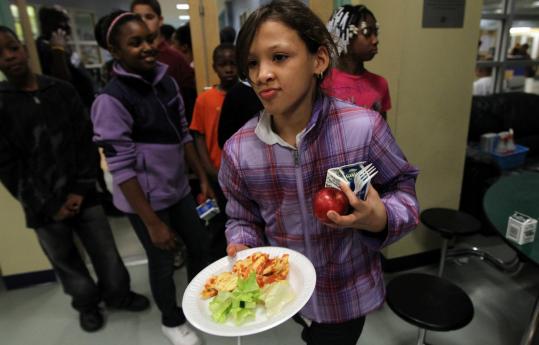 Poverty has deepened in Boston’s poorest neighborhoods, widening the gap between the city’s wealthiest and neediest residents, a report being released today finds.

The study points to concentrated need in Dorchester, Mattapan, and Roxbury, where 42 percent of children live in poverty, the densest cluster of childhood poverty in the state, according to the study sponsored by the Boston Foundation.

In those communities, 85 percent of families are headed by a single parent, mainly mothers, and at least 20 percent of the adults have no high school diploma.

Poverty there is fueled by unemployment and low educational attainment, the study found.

“We no longer have conditions for the American dream; that actually does not exist anymore,’’ said Tiziana Dearing, executive director of the antipoverty organization Boston Rising, who had not read the report. “It is, in fact, harder now than it used to be.’’

In 1990, 24 percent of African-American children across the city lived in poverty. Nearly two decades later, that figure has risen to 35 percent, the study indicated.

The report, which found that poverty citywide remained constant in the past two decades, confirms recent studies by the US Census Bureau and the Brookings Institute finding that despite substantial progress against concentrated poverty during the 1990s, much of those gains have been erased in the turbulent 2000s.

The report ties Boston to a global trend linking race, class, and income disparities. It also illustrates the toll exacted by the depressed economy in extremely poor communities plagued by inadequate health care, lack of jobs, and persistent crime.

National policies have not been kind to families on the lower rungs of the economic ladder or to industrial workers, their jobs automated or sent offshore, officials at the foundation said.

“Boston is a full participant in those trends,’’ said Paul Grogan, the Boston Foundation’s president. “We have succeeded in building a knowledge economy. It’s an economy that richly rewards those with the right education credentials and harshly punishes those without those credentials.’’

The study found that from 1990 to 2009, the cost of living in Boston increased by 68 percent, while federal poverty guidelines that set a benchmark for government aid rose by just 55 percent. That shift further stymied poor families.

Boston has transformed into a “majority-minority’’ city and witnessed a boom in its Asian and Latino communities. Most members of minority groups live in Roxbury, Dorchester, Mattapan, and East Boston. By contrast, the Back Bay, Beacon Hill, and South Boston are more than 80 percent white, the study said.

Although Boston remains a city of affluence in some corners, impoverished residents flock to food pantries, government programs, and shelters seeking relief, even as those agencies see their budgets squeezed.

Mayor Thomas M. Menino blamed cuts in state and federal aid for exacerbating the plight of the poor. Still, he said, as the nation recovers from economic stagnation, his office is working to ensure that “our progress is widely shared.’’

“When there is a program that helps low-income folks, we’re there,’’ Menino said. “We can’t do it alone. We need the state and federal government to help. Anybody who is in poverty, we are there to help them.’’

Darnell Williams, who heads the Urban League of Eastern Massachusetts, said the report supports his organization’s recent findings on the state of black Boston, which found African-Americans lagging in education and in economic and social progress.

“It tells us that we have not addressed serious issues of poverty in the black community,’’ Williams said. “When we talk about jobs, education, and nutrition and health, all those are far removed from the day-to-day reality of the people in the community.’’

The study, called “The Measure of Poverty: A Boston Indicators Project Special Report,’’ was sponsored by the Boston Foundation. Its aim was to open dialogue among government and service providers on how best to aid the poor.

Grogan said that tackling problems such as youth violence, high unemployment, and lack of affordable housing can help to lessen the burden of poverty.

One critical area requiring improvement: the city’s public school system, where 74 percent of the 57,000 students receive free or reduced-priced meals and 6 percent have dropped out, according to the city figures.

“We have to have an education pipeline for people who come here in poverty,’’ Grogan said, “so they don’t get trapped there.’’